A SOBER bride-to-be has been labelled "super tacky" for refusing to splash out on an open bar for her wedding guests.

The American bride sparked furious debate when she revealed she wanted to keep her lunch-time wedding alcohol-free as neither her or her future husband drink. 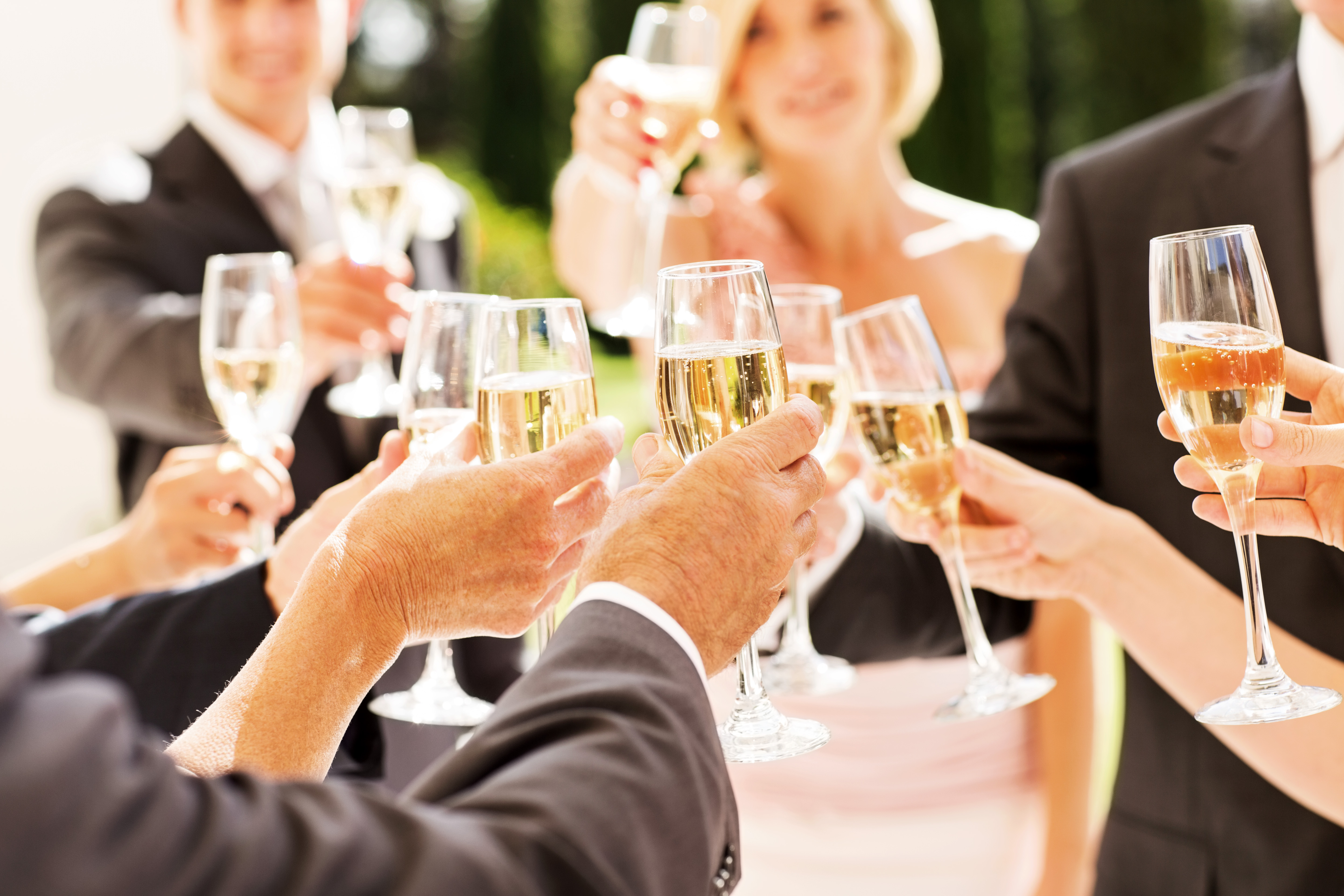 Posting on the Facebook group That's It, I'm Wedding Shaming, the woman explained that it's going to be a "brunch wedding" which will take place in a "small restaurant from 9:30am to 3:30pm".

But while the happy couple will be covering the costs of their guests' full brunches complete with "juice, sodas and speciality coffees", they're reluctant to pay for all of their guests' pricey alcoholic drinks.

Trying to justify their decision to have a "dry wedding", the woman wrote: "Neither my fiance or I drink alcohol at all for various reasons [and we] don't keep alcohol in the house."

Discussing how she's skirted the issue in the past, the bride added: "If we invited guests over for dinner at home or a celebration, we provide all the food but we don't serve alcohol – we've had guests bring their own before." 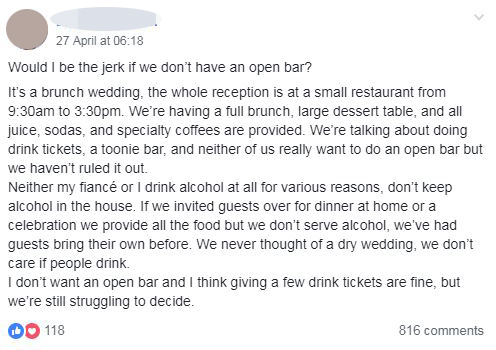 Similarly, the couple are now considering given guests drink tokens instead of providing a pricey open bar as way of keeping everyone happy.

Unsure of her decision, the woman wrote: "Would I be a jerk if we don't have an open bar?"

Unsurprisingly, the matter has sparked a heated debate among the group's 82,000 members.

Quick to label her "super tacky", one user brutally replied: "Where we are it is just part of the reception. Nobody does a cash bar."

Another added: "I work in catering and every dry/limited drinks wedding has been godawfully boring. I know alcohol doesn't make a party – but just from personal experience, I would recommend." 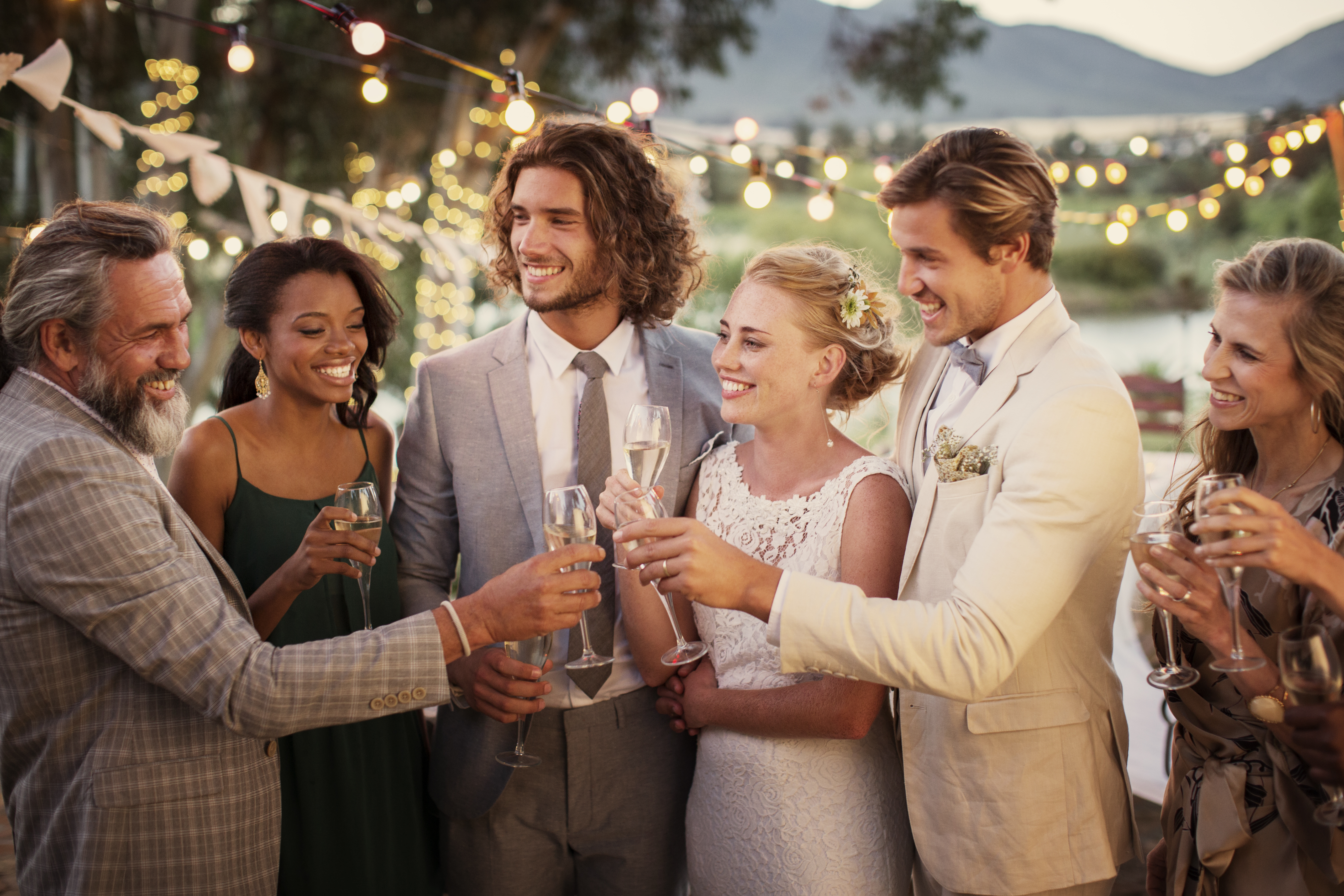 Unable to imagine a wedding without a glass of prosecco (or two), a third wrote: "It's an event that they're literally HOSTING. Be a HOST to your GUESTS. I would be SNORING by 1pm…"

Based on the couple's choice of a brunch-wedding, another said: "I would consider providing champagne at least."

However, others have rallied around the bride and said she shouldn't have to serve alcohol as she doesn't drink herself.

One wrote: "Your friends and family know you and your fiancé don’t drink so if you choose to just serve coffee, tea and juice nobody will mind."

Another wellwisher wrote: "Said it before I'll say it again, open bars are for rich people and people who like to be in debt. They are not a requirement."

Considering the time of day the celebrations are taking place, one user replied: "A noon reception doesn't need an open bar. Could be a waste of money. Drink tickets would be nice though."

For more wedding horror stories, this "inappropriate" wedding guest has been accused of trying to upstage the bride by wearing a bodycon dress with exposed sides.

Plus this bride has been slammed for forcing her maid-of-honour to wear an "unflattering" dress which makes her look like a "stuffed sausage".

And this bride-to-be has been urged to burn her "trainwreck" wedding dress with exposed middle as it would "only flatter someone with Elle McPherson's body".