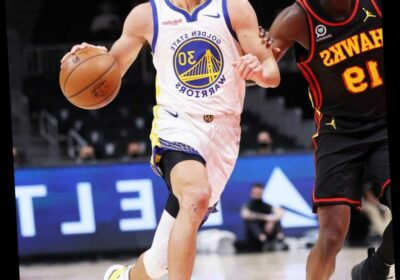 Stephen Curry showed support for the Asian American community by wearing custom sneakers featuring a hand-painted image of Bruce Lee and his family, as well as a quote from the late actor and martial artist, when the Golden State Warriors played the Atlanta Hawks on Sunday.

Ahead of the game, the NBA star told reporter Nick Depaula of The Undefeated that the yellow, black and white shoes were created in collaboration with the Bruce Lee Foundation and will be auctioned off to benefit the families of the eight victims of the shooting spree at three Atlanta-area spas last month.

The quote by Lee is painted in cursive script on the inside of Curry's sneakers and reads, "Under the heavens, there is but one family. We are all different & unique. On purpose. But, we are all human beings on a quest to fulfill our purpose and that energy should be used to uplift & love each other to the fullest." "Disgust, horror and outright anger at why any violence keeps happening in our country," the basketball pro, 33, told the outlet. "After all we have been through this past year, let alone in the history of our country, people still deal with unnecessary tragedy and are afraid for their lives. We have to do better." Lee's daughter Shannon, who is the CEO of the Bruce Lee Family Companies and chairperson of the board of directors for the Bruce Lee Foundation said, "I think Stephen's gesture is a beautiful example of allyship and solidarity in action."

"I am honored he would choose my father and my family as the symbol for the idea that we are all one family, as my father said, and therefore must all stand for one another," she added. On March 16, eight people were killed by a gunman who opened fire at the spas — one in Cherokee County north of Atlanta and two in Atlanta soon after. Six of the eight slain were Asian women.

The suspect, a 21-year-old white man named Robert Aaron Long, is in custody and confessed to the killings, authorities say. (It was unclear if he has retained an attorney who could speak on his behalf.)