Sophie, Countess of Wessex was the guest of honour at the The British Bobsleigh & Skeleton Gala Dinner in Canary Wharf, London, on Wednesday. The 54-year-old looked stylish as ever, wearing a navy blue dress by Azzedine Alaia. The dress featured a jewel neckline and had scallop detailing. The designer number costs £2290.

Sophie, Countess of Wessex was pictured in the same dress she wore to Princess Eugenie’s Royal Wedding

And, it seems that Sophie is ensuring she gets plenty of use out of the garment – having previously worn it at Princess Eugenie and Jack Brooksbank’s wedding last year.

On Wednesday, the royal teamed the look with a pair of pointed stiletto heels.

She also accessorised the look with a silver ankle and drop earrings.

However, at the Royal Wedding in October, Sophie wore a large fascinator, which was a creation by hat designer Jane Taylor.

Earlier on Wednesday, Sophie paid a visit to Wittering Village in Peterborough.

The Countess opened a new play area for children who live in the area.

The royal wore a cream MaxMara dress which had a belt at the waist.

Sophie teamed the look with a navy blazer, which she is believed to have worn before, as well as £470 grey suede Gianvito Rossi shoes.

The Countess and her husband Prince Edward, 55, were revealed to be taking on a new role this week, as was Prince Andrew, 59.

The royals were named as new Vice Presidents of the Royal Windsor Horse Show.

Sophie, Countess of Wessex in pictures

Sophie, Countess of Wessex, wife of Prince Edward in pictures. 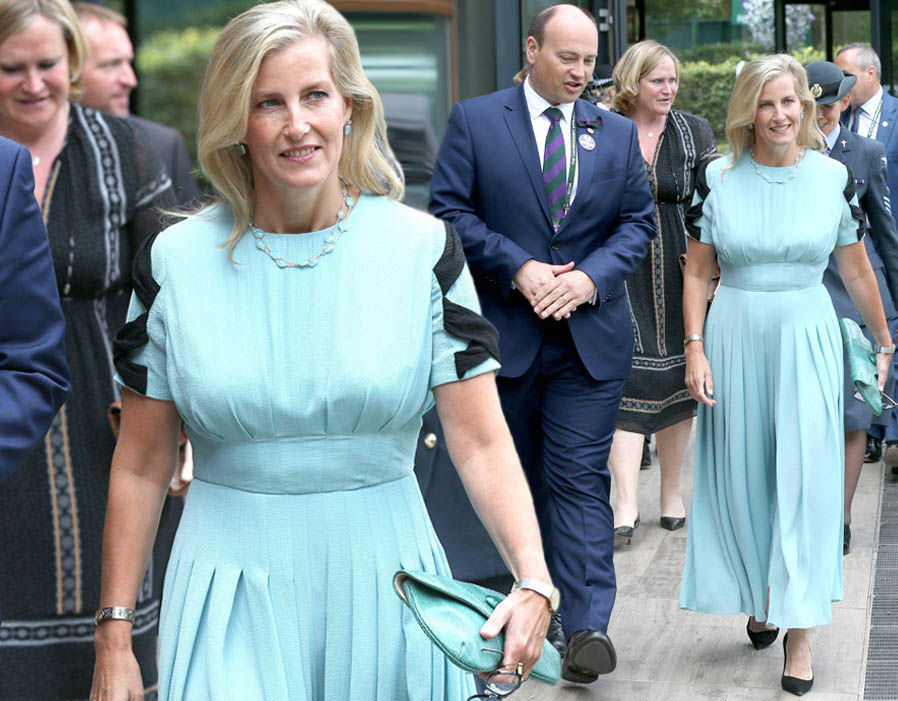 Sophie, Countess of Wessex in pictures

Queen Elizabeth II, 93, is Patron of the annual event, which is Britain’s largest Horse Show, while Prince Philip, 97, is President.

The reason why the tiara Sophie wore at her wedding was so different to a fellow royal bride has been revealed.

Sarah Ferguson, Duchess of York, who is now divorced from Prince Andrew, wore a tiara which had been created from new jewels, when she walked down the aisle in 1986.

Sophie also wore a new creation when she wed Prince Edward in 1999 – however there was a key difference in the design of the two.

In fact, this tiara had been made using antique jewels.