A DAD created his son’s dream Toy Story bedroom using his own vintage toys and bargain buys from Primark, eBay, and Aldi. 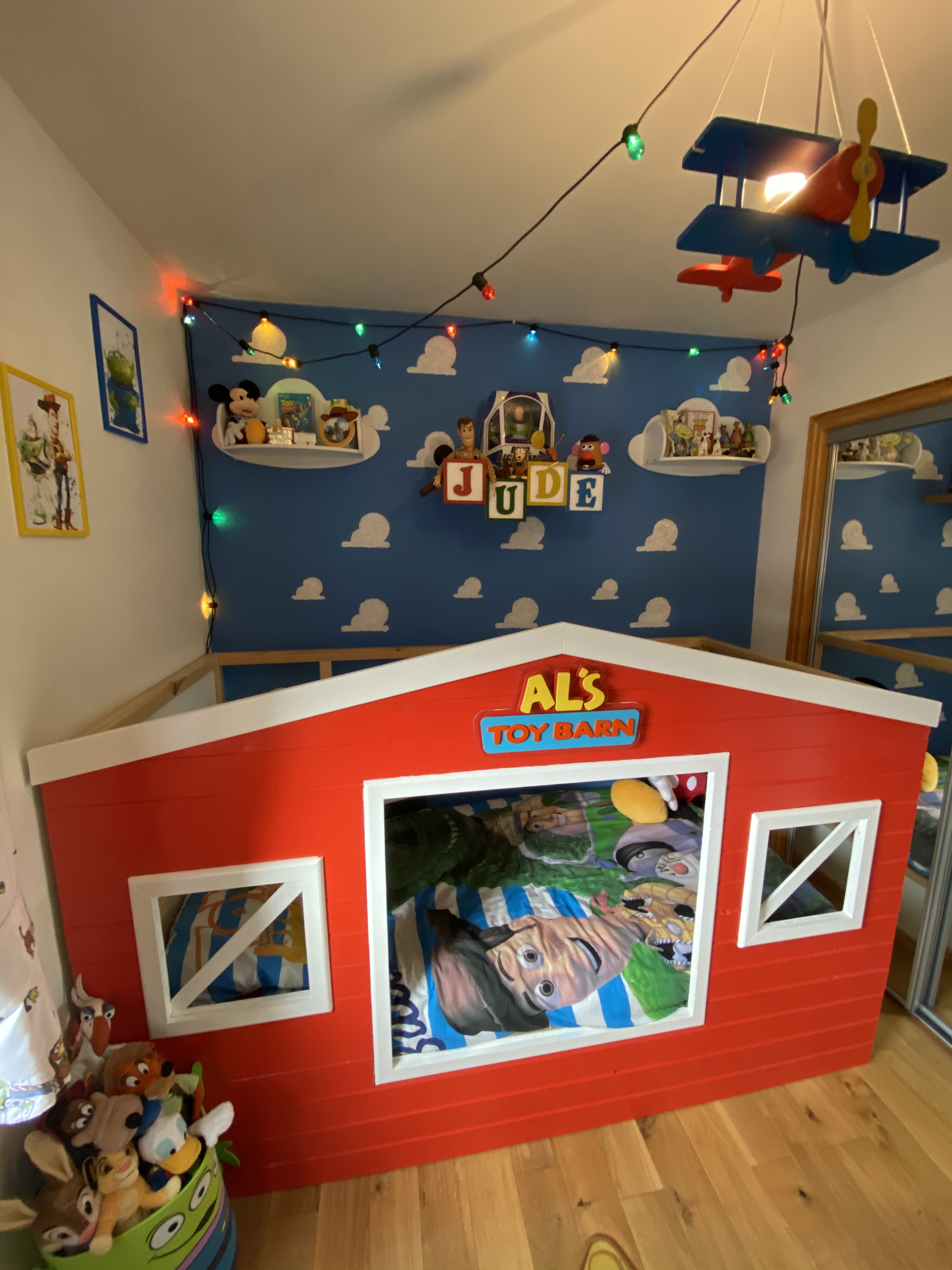 A fan of the original film, Wayne gifted his 25-year-old toys to Jude as a starting point for the room.

Supervised by mum Tasha, 32, the room was created over six days.

Both the bed and string lights are from Ikea. Tasha found the cloud shelves in Aldi and the Sheriff Woody rug at Next.

Paint and wooden materials from B&Q allowed dad Wayne to create the bed whilst bedding from Asda completed the look. 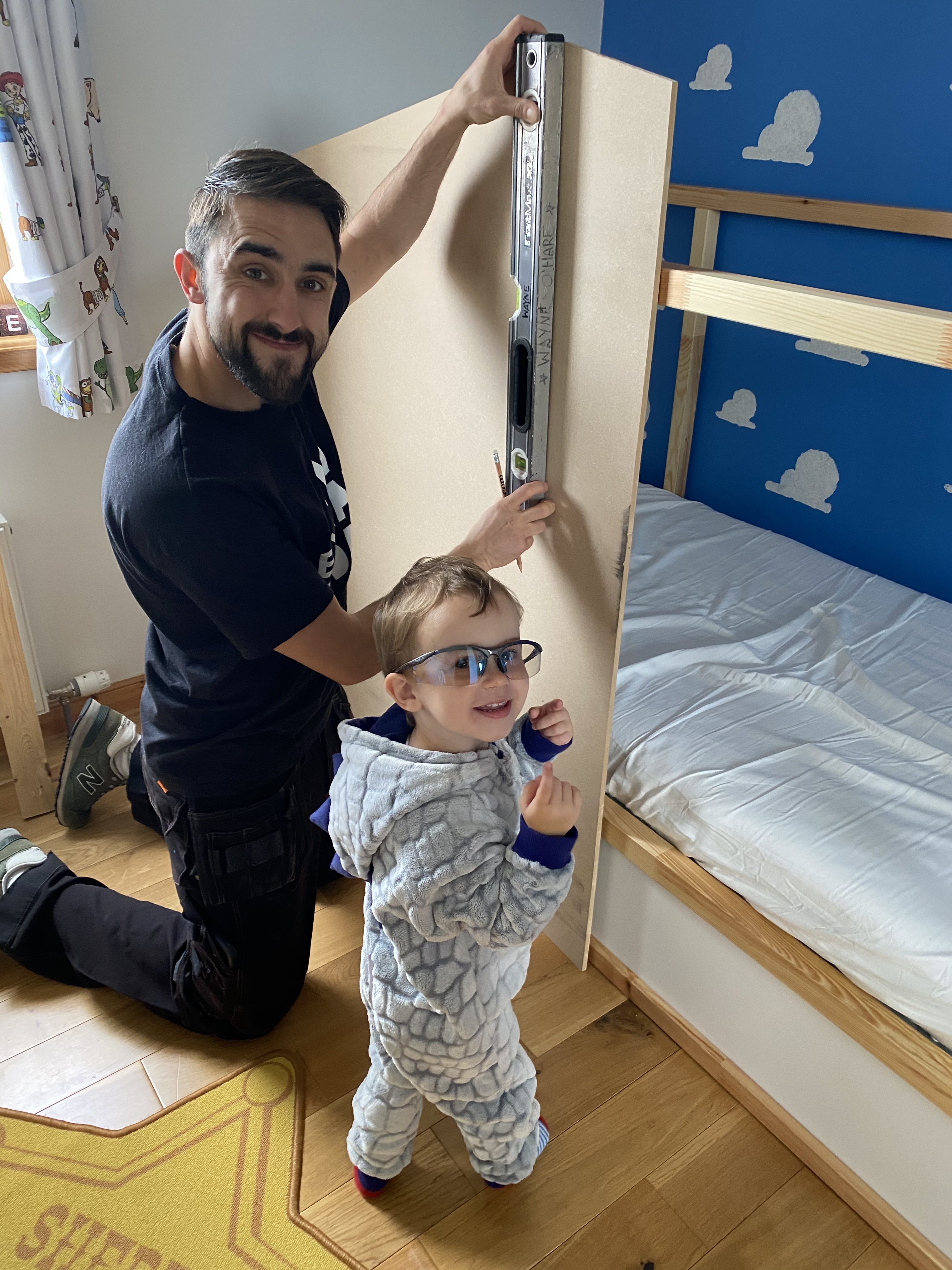 Further pieces including the curtains, toy box, and alien cushion were purchased from Dunelm Mill, Primark and Etsy.

“We’re huge Disney fans and we knew we wanted to do Jude’s bedroom up. We’d been looking at Disney inspired rooms on Pinterest and picked Toy Story as that’s one of Wayne’s favourites,” Tasha said.

“We started off by creating a cloud stencil from a piece of cardboard which we used to get the patterned effect on the walls.

“We struggled to find a bed that suited the room so Wayne decided to make one which took around three days. He used MDF sheets, tongue and groove boards and some old bed slats to create the ‘barn’ and then fixed this to an Ikea Kura bed.

“We kept costs down by creating the wallpaper look ourselves as the official one was fairly expensive. 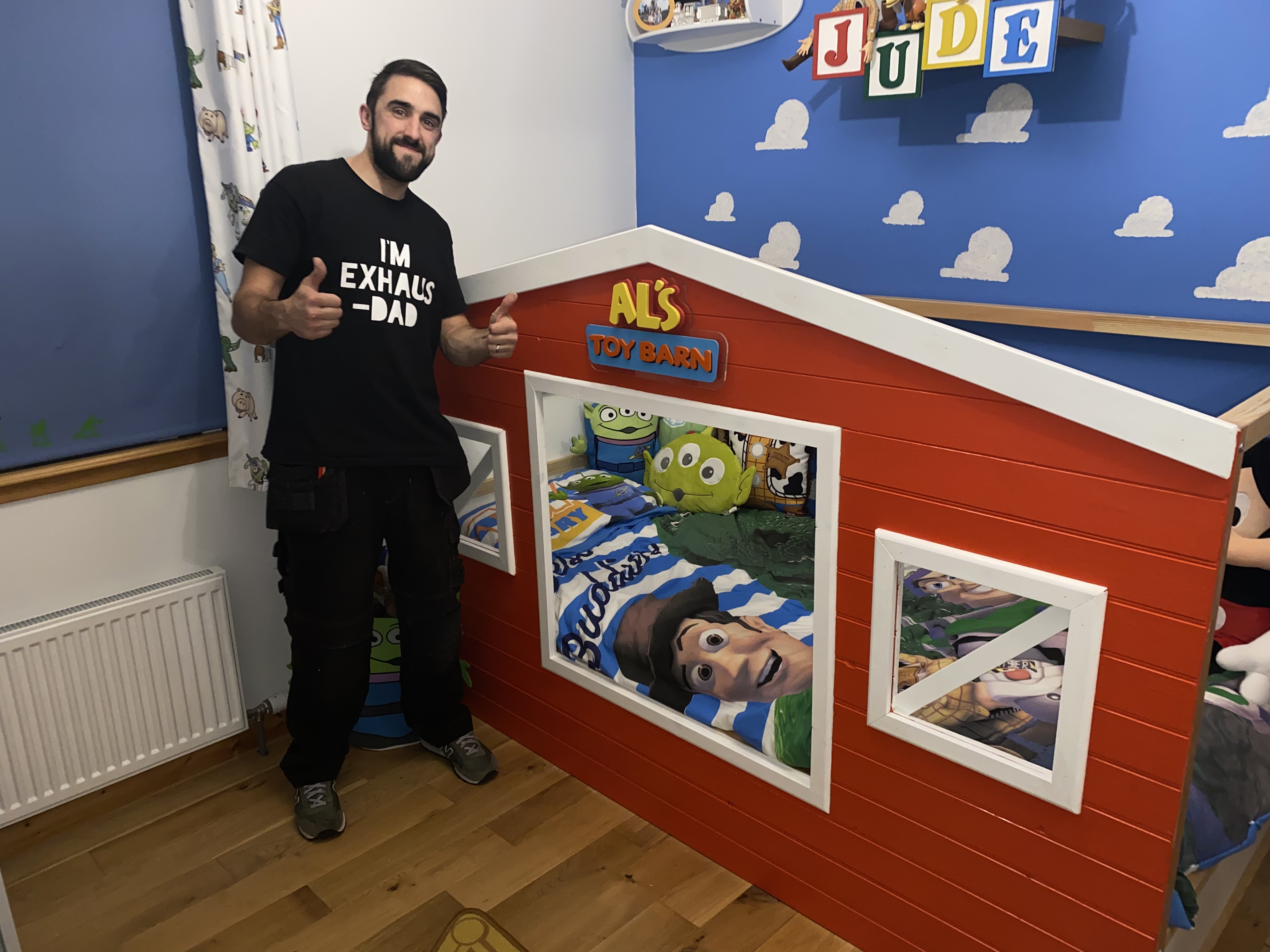 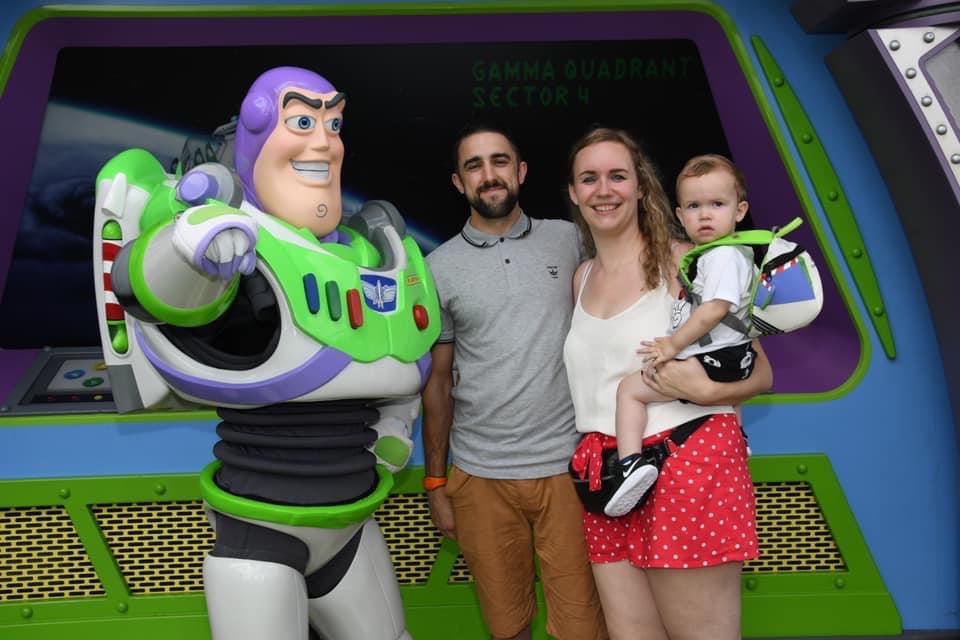 “This was similar with the blinds – plus we didn’t want solely generic merchandise that you can buy anywhere and everybody has, so we applied our own green army men to a plain blind.

“Some of the toys were Wayne’s own from when he was younger – official first-generation merchandise.

“Jude even helped out with the measuring and wore his safety goggles.

“He loves his new room and even now, still keeps jumping up thanking his daddy.”

Wayne and Tasha advise that the key to keeping DIY costs down is to never underestimate your own ability. 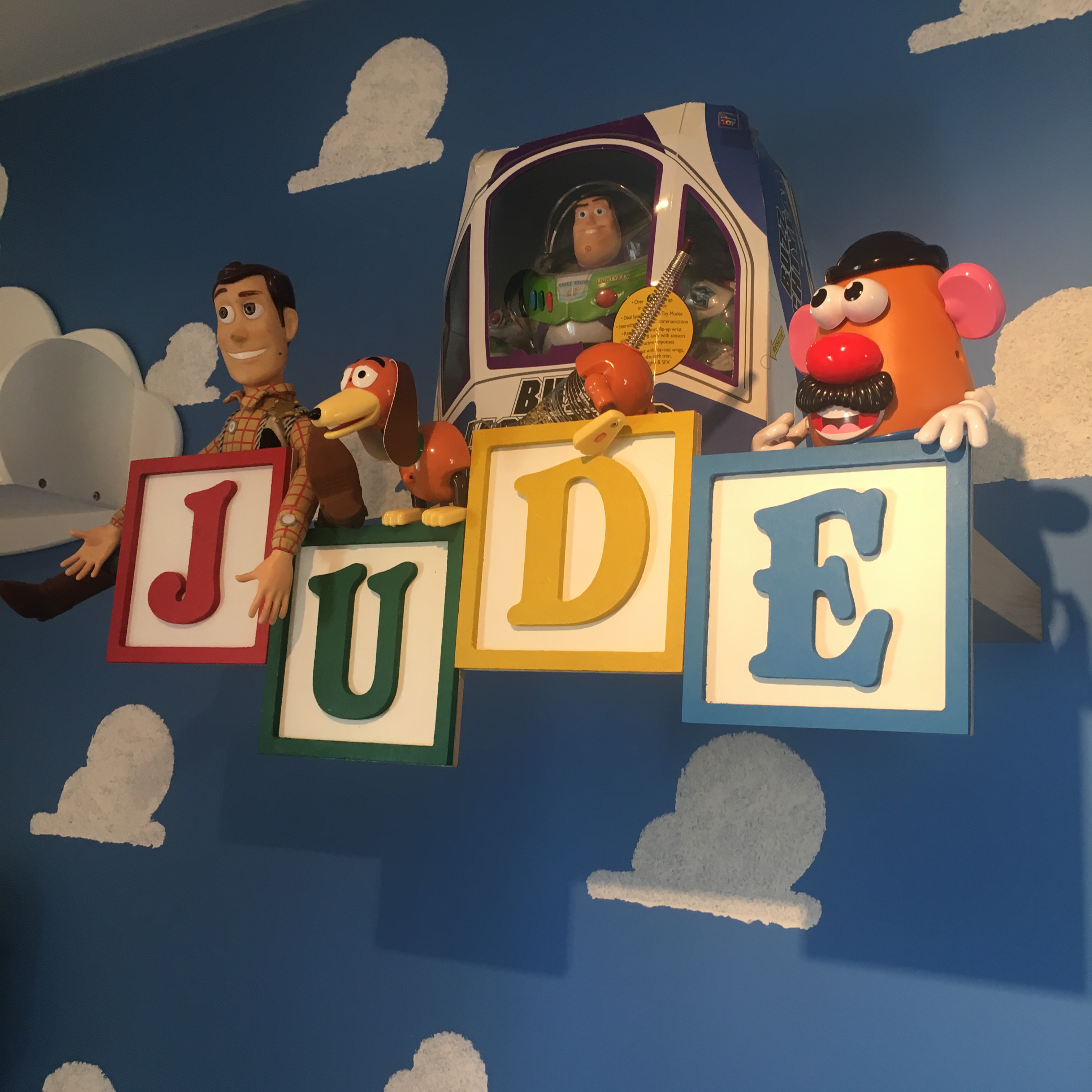 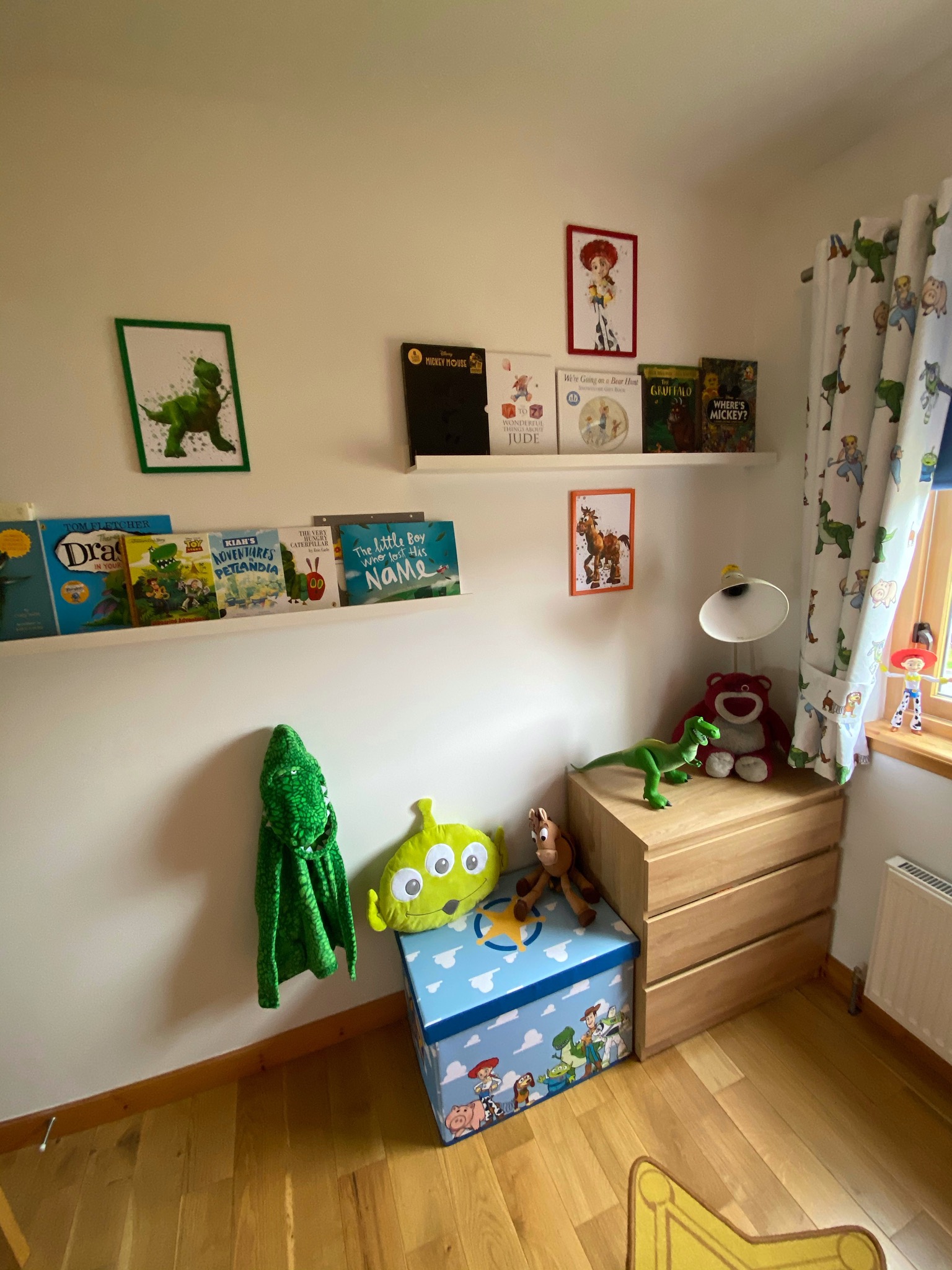 “I’d never done anything like this before, but we had the idea and as my job is really hands on and involves constructing things, I thought it was something I could have a go at and it was something I also wanted to do for my son,” Wayne said.

“Our love of Disney was always going to be passed on to our children so our family and friends weren’t surprised when we revealed the theme of his room.

“Many of our family and friends were shocked that I had done the room myself without outside help. They assumed the bed was custom-made and cost a fortune.

“It just goes to show that you shouldn’t settle for just buying out of shops and having the same as everyone else.

“You should never underestimate your own abilities. Sometimes you can achieve exactly what you want for a lot less.”

In more home renovation stories, we shared how this thrifty mum was gets quoted £200 for rainbow wallpaper for her daughter’s room but sorts it herself for a tenner.

And one mum shares homemade ‘Kinder Egg’ hack using toys her kids already own – and is labelled a ‘queen’ for the crafty move.

Meanwhile, a children’s book explaining how babies are made goes viral for its bizarre explanation of sexual positions