Sashaying Their Way Through Youth “I’m excited!” screamed Desmond Napoles, a 12-year-old drag star who performs as Desmond is Amazing, punctuating his enthusiasm with mild profanity. His eyes darted to his phone. Then he backtracked. “Don’t put that in. Don’t put that in.” He would soon be grounded from Snapchat by his mother for what she called “sass.”

Desmond and his mother would still make it to the object of Desmond’s excitement: DragCon, the convention hosted by RuPaul in New York City in early September. It would be Desmond’s third year in a row. He isn’t a different person in drag so much as a more outgoing version of himself, he said. “I’m always fierce, fabulous and not playing video games,” he said. “I’m being AH-MA-zing.”

From an early age Desmond was theatrical, said Wendy Napoles, his mother. There were dresses fashioned out of household items like recycled cardboard, ribbons, towels, Bubble Wrap. Once, she said, at a mall food court, Katy Perry’s “Firework” came on and he broke into an impromptu dance routine. 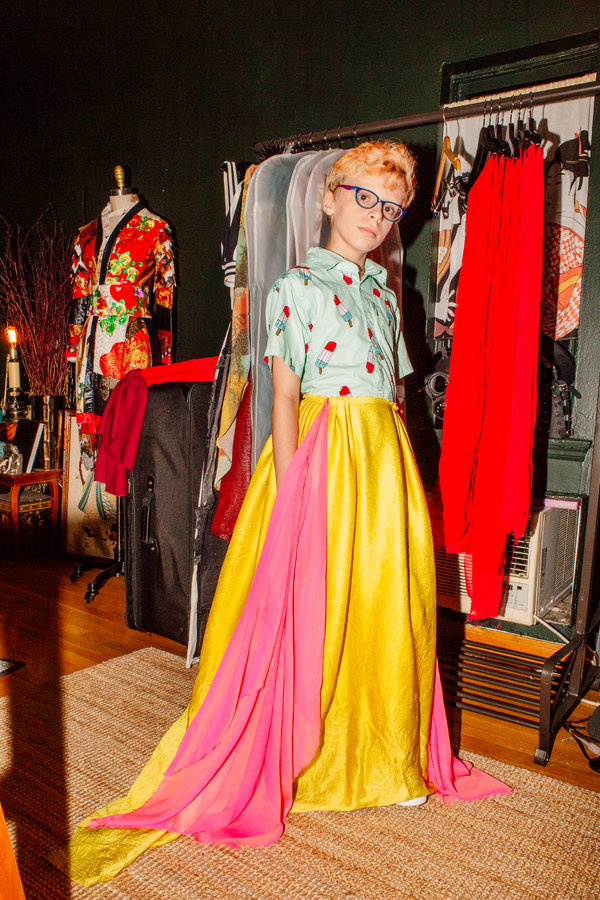 Desmond pegs his start in the world of drag to 2015, when videos of him vogueing at the New York Pride parade went viral; at one point, a high kick sent a flip-flop soaring over the crowd. Next came gigs channeling Gwen Stefani and David Bowie, along with runway shows for Gypsy Sport and the Blonds.

“Other moms are a soccer moms,” Ms. Napoles said. “They take their kids to practice, to games, they cheer for their kids. That’s how I see myself with drag.”

Keegan, a.k.a. Kween Keekee, is a 9-year-old drag queen. (The New York Times agreed to not use the family’s last name, to protect their privacy.) “Our goal has never been to make K famous,” said his mother, Megan. “We allow Instagram to be a public account as we don’t feel we need to be pressured to hide our child, and because we think his story could help other kids.”

When Keegan announced he wanted to do drag, one difficulty his mother encountered was that her family didn’t know where to start. So she took to Instagram to find a high-school-age babysitter who does drag. She also connected with Keegan’s drag mentors: adult queens who today help with costumes (mostly sparkly) and makeup.

As recently as the 1970s, when dressing as another gender could lead to arrest on charges of vagrancy or “perversion” in many jurisdictions, drag was an adults-only affair, relegated to underground spaces and rich in sexual innuendo.

But as gay culture has gained mainstream acceptance, the number and variety of locations where drag is welcome have grown. G-rated story hours are now offered at public libraries. Kids — and parents intent on raising them outside of traditional gender norms — are keen to perform.

“This is the first generation that was truly raised on ‘Drag Race,’” said Robin Johnson, a photographer, who founded Dragutante, an 18-and-under runway show in Denver. When her son, a 14-year-old who in drag is known as Ophelia Peaches, was in elementary school, they would watch “RuPaul’s Drag Race” together, for “the gowns, the pageantry, the acting, the drama.” It was “like Disney princesses,” she said.

Ms. Johnson estimated that there are more than a hundred kids doing drag around the United States, based on outreach to Dragutante and to Ophelia. Some have public social media platforms and are on their way to careers.

Desmond, with 180,000 followers on Instagram, has the largest online presence, followed by Lactatia, a 10-year-old in Montreal. CJ Duron, 12, whose mother is the author of “Raising My Rainbow,” recently appeared in a Sephora Pride campaign; although he is not a “drag kid,” he is inspired by the art form, Ms. Duron said.

Mothers run most of these accounts. (Despite the binary-shattering implications of this scene, drag moms far outnumber drag dads.)

The job consists largely of filtering comments. An active subset of the internet sees kids in drag not as “the future of America,” as RuPaul has said of Desmond, but “socially accepted child abuse,” in the words of Elizabeth Johnston, a vlogger who “daily tackles the left on abortion, feminism, & gender insanity,” according to her social media bios.

Her network also helped call for the cancellation of several drag queen story hours at local libraries. Among their criticisms are that exposure to drag sexualizes children and leads to confusion around gender roles.

Nina West, a queen who appeared on “Drag Race” and who has often performed for kids, said that while drag is a form of gender protest, it is not inherently sexual. “Drag is the larger than life representation of a character,” she said.

At drag queen story hours at a library, she often reads the book “Red: A Crayon’s Story.” In it, a red crayon discovers it is wrapped in the wrong label, and was really blue all along.

In her music video “Drag Is Magic,” she performs in front of a group of kids dressed as police officers, pirates and princesses. “Colorful. Bright. Loud. Big! Those are things that kids respond to,” she said. “Who’s to say what Barney is?”

Laura Edwards-Leeper, a clinical psychologist in Oregon who works with queer and trans kids, said that experimenting with gender expression isn’t necessarily linked to being queer or trans. “It’s normal at basically any age for boys to dress up as princesses and girls in male superhero outfits,” she said.

What’s changed is parenting. “When there’s no judgment, kids are more likely to feel free to explore,” Dr. Edwards-Leeper said.

“We had a kid who was a drag queen one year and a drag king the next,” Robin Johnson said. “We have had four hyperqueens, or girls doing drag.”

Esai, a.k.a. E! the Dragnificent, 14, has been “been doing drag since before she knew she was,” according to her mother, Andrea Varela, who produces burlesque shows. “There were always lots of rhinestones and boas and costumes around. It was a very colorful environment.” A few years after she started doing drag, Esai came out as trans. She now identifies as female.

In one way, the debate over drag kids mirrors one in drag as a whole: How mainstream can the art form become before it loses its subversive power?

“By opening their thriving subculture to children out of a misguided sense of ‘inclusivity,’ gay men risk losing a space for their expression at all — or alternatively, opening their subculture to Disneyfication,” the writer Kevan Copeland, a 38-year-old gay man in Toronto, wrote in a post on Medium.

But at least for now, kids are drag’s least commercialized niche. Desmond is Amazing has the most followers out of any drag kid. So far, his family has spent far more money than they have made, according to Ms. Napoles.

“I truly think 10 percent of his followers are there to watch every move he makes because they hate him,” Ms. Napoles said. In January a talk radio host reported Desmond’s family to Child Protective Services after he performed at 3 Dollar Bill, a queer bar.

Desmond has since pulled back on performing, though he will attend DragCon. Even there, among fans, he is not particularly looking forward to the crowds. When fans yell his name and swarm him for hugs, “it makes me anxious,” he said. He dreams of being an ornithologist when he grows up, he said, or a roller-coaster engineer.

Keegan, three years younger than Desmond, is less aware of judgments of the outside world. When his mother was growing up in the 1980s, she dressed like a tomboy and felt ostracized, she said. So when her two sons were in preschool and wanted to wear pink and take dance lessons, she was careful not to discourage them. (These days, her older son is intent on “making sure people know he’s a boy,” she said.)

When he was wearing his favorite pair of glitter shoes at school recently, Keegan recalled, a classmate said: “Those are girls’ shoes.”