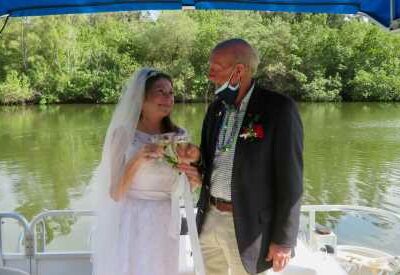 In the years leading up to 2019, Lane Harris watched the landscape around her home in Ithaca, N.Y., become overgrown. Weeds crept up the raised bed in the backyard. Woody shrubs bombarded the lilac bush. The fig tree was ailing.

Since then, it has become a different picture entirely. The weeds were cleared away, replaced by kale plants, tomatoes, basil, thyme, marjoram, sage and sugar snap peas. The peonies and lilies of the valley, once choked by weed growth, became vibrant again. There were new flowers planted, too, among them gomphrena, ageratum, pansies and cosmos.

The factor that drove the change? Ms. Harris started dating Mark Earl Sorrells, a professor of plant breeding and genetics at Cornell University. In April 2020, when he moved in, Ms. Harris said, “he just made my home a better place.”

Ms. Harris and Mr. Sorrells first met around the spring of 2016, at a pub in Ithaca. Mr. Sorrells, whose professional projects include the development of small grains for use in craft breweries, was there to taste beers brewed with New York-grown barley and hops. He remembers sitting in a corner of the pub, reading by himself. Ms. Harris, who was at the pub with a friend, noticed him.

“He seemed so solitary,” Ms. Harris said. “I knew there was more there.”

She introduced herself to him. They talked for a little while. They became acquaintances.

In the few years that followed, the two kept crossing paths in Ithaca, chatting whenever they saw each other. At one point, Ms. Harris mentioned to Mr. Sorrells that she had a taste for kale — she crisps the leaves in the oven to make kale chips. Soon afterward, Mr. Sorrells showed up on her doorstep with a leafy bushel from his garden. That’s when the nature of their relationship began to change — “the kale kind of brought us together,” Mr. Sorrells said. It was the first time that they were alone together anywhere. 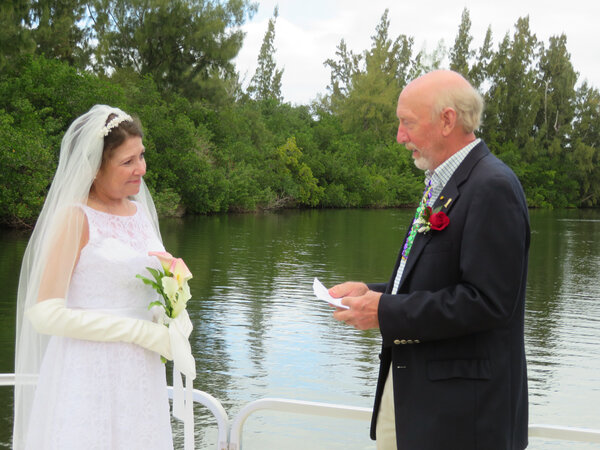 In fall 2019, Ms. Harris asked Mr. Sorrells on a date. They had dinner at an Italian restaurant that Halloween. In January, they had their first kiss. By that April, Mr. Sorrells had moved in with Ms. Lane. He began overhauling the garden.

Ms. Lane, 53, and Mr. Sorrells, 70, were married Feb. 14, on a white pontoon boat on the Indian River in Vero Beach, Fla., where the bride has spent her winters for the past 20 years. Their ceremony was officiated by Robin G. Patton, a friend of the couple who was ordained by American Marriage Ministries.

Before the ceremony began, Ms. Lane stood on a dock waiting for Mr. Sorrells, who was already on the boat. When he arrived to pick her up, he had a recording of Miles Davis playing “Someday My Prince Will Come” belting from a Bluetooth speaker on deck. It was as though Mr. Sorrells were sweeping her away on a white horse, Ms. Lane explained, “but it was on a white boat.”

Ms. Lane made her own bridal bouquet for the occasion, using calla lily flowers plucked from plants that she and Mr. Sorrells picked out from a Publix supermarket. After the ceremony, Ms. Lane and Mr. Sorrells took them back to Ithaca. They intend to plant the bulbs in their garden.