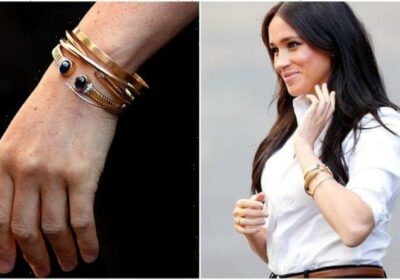 Prince Harry gave Meghan Markle Princess Diana’s jewels and a necklace that even caused a royal row. Meghan celebrated her 40th birthday on Wednesday, and Harry probably gifted her with some luxurious jewellery given his record is already pretty good. Over the years, Harry has splashed out huge sums on jewellery for Meghan, as well as giving her some sentimental pieces, including jewellery that used to belong to his mum, Princess Diana.

Below are some of the priciest and most expensive presents Harry has given Meghan during their relationship.

Harry reportedly showered his new girlfriend with romantic gifts during the early days of their relationship.

Among them was a Cartier Love Bracelet, which Meghan wore for several royal engagements.

This necklace caused a royal row according to the authors of Finding Freedom.

When things started to get really serious, Harry gave Meghan a Maya Brenner necklace featuring the letters M and H.

She clearly loved the piece and was spotted wearing it during days out in London.

The necklace however ended up causing a row with royal aides with Meghan reportedly getting an uncomfortable call from Kensington Palace.

Omid Scobie and Carolyn Durand claim an aide advised Meghan not to wear this kind of jewellery, saying it would only encourage the press.

They wrote: “She was advised that wearing such a necklace only served to encourage the photographers to keep pursuing such images — and new headlines.”

They alleged Meghan was upset by the call, and said very little, simply listening to the aides to not further the tension.

They wrote: “But after hanging up, she felt frustrated and emotional.”

Perhaps Harry’s most famous jewellery gift is the engagement ring he proposed with in 2017.

Two of the diamonds were from Princess Diana’s collection and one was from Botswana, where he does a lot of charity work.

The jewels originally sat on a plain gold band, but Meghan later changed this for a glitzier, much thinner micropavé band.

On their first wedding anniversary in May 2019, Harry gave Meghan another ring, an eternity band.

The stunning piece is covered in diamonds, and she wears it next to her engagement and wedding rings.

As Meghan and Harry drove to the evening celebrations on their wedding day, the new Duchess showed off her latest jewellery gift from the Duke of Sussex.