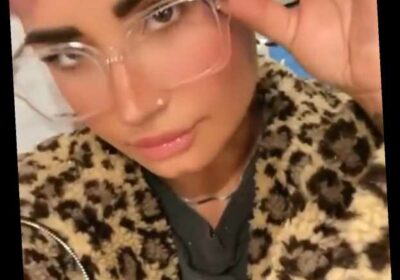 The "OK Not to Be OK" singer, 28, who has never been afraid to experiment with daring hairstyles, decided to dye her hair bubblegum pink over the weekend and debuted the new look on Instagram.

In the selfie video she shared, Lovato showed off her freshly chopped pixie cut and pastel hue, which she credited to hairstylist Amber Maynard Bolt. Instead of dyeing her entire mane pink, Lovato kept her shaved edges a deep brunette color. She simply captioned the post with a pink heart emoji.

The comments on Lovato's video were filled with love for her new look. "Well we already knew but just to confirm…Can pull anything off 🔥🔥🔥," said model Iskra Lawrence.

RELATED: Demi Lovato Celebrates Her Stretch Marks with Glitter, Opens Up About Her Eating Disorder Recovery

One of her fans said, "You're so pretty you call pull off anything!" Before going pink, Lovato's most recent 'do was a bright blonde mohawk with shaved sides and a longer, sweeping side bang. She showed off the style (also created by Maynard Bolt) for the first time in November by saying, "I did a thing…"

When Lovato debuted the look, her style team noted that the singer's hairstyle is confirmation that she was entering a new chapter of her life. Her photographer Angelo Kritikos reposted the image, writing, "Already obsessed with this new era …" and Lovato's wardrobe stylist Siena captioned her post, "And to the next chapter …"

The hair change comes not long after Lovato called off her engagement to Max Ehrich in September. Multiple sources told PEOPLE that the couple decided to go their "separate ways" after several weeks of "conflicts."

"It was very hurtful to Demi when she realized that Max's intentions weren't genuine," one insider told PEOPLE. ″Breaking off the engagement was not an easy decision."

″Demi and Max were basically together 24/7 for months,″ said another source about the early stages of their relationship. "They lived in a bubble with zero stress and everything was just fun."