The Italian-born Frenchman Pierre Cardin’s surname was perhaps the first French word that many Americans could easily pronounce. People with no inkling of how to utter designer names like Givenchy, with its suppressed “g,” and the sibilant Gallic uptick at the end of Saint Laurent (let alone the impossible Yves) had little difficulty speaking the two syllables and hard consonants of Caar-dan. Lesson: If you plan to become a household name, pick one anybody can say. 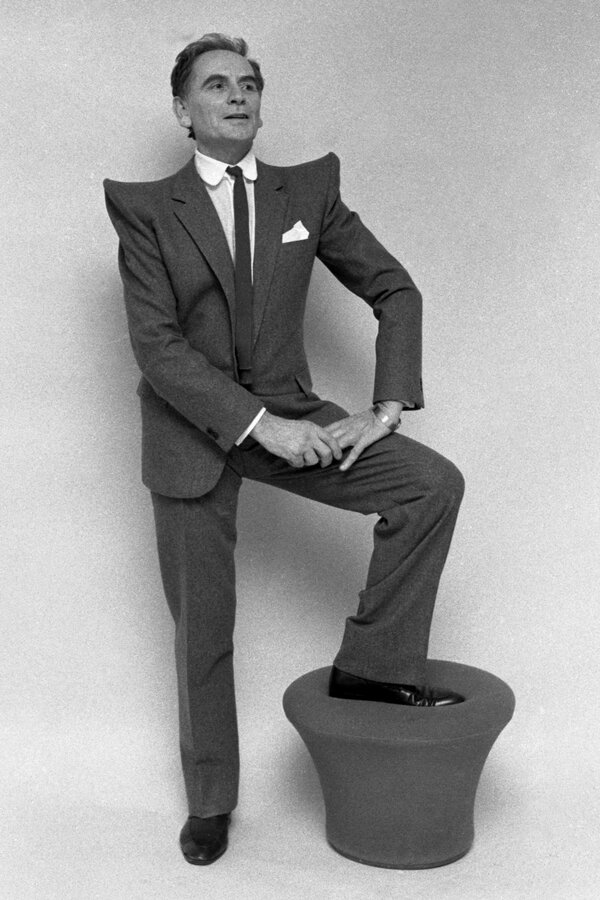 True, Mr. Cardin’s sexuality was a secret, albeit a vaguely open one. Leaving aside a brief and very well-publicized affair with Jeanne Moreau, he remained a committed partner to one man for more than 40 years. It may seem like overreach to posthumously queer the designs of a man who had little to publicly say on the matter. But, as with Jodie Foster during that period in her career when many of her starring roles depicted characters that were muted, alienated, desperate to communicate … something, stuff leaks out.

Consider all the slots, orifices and protrusions that Mr. Cardin added to his clothing. Consider the Cardin cologne bottle shaped like something you’d hide in a night stand. When the artist Jack Pierson was growing up a gay kid in Plymouth, Mass., Mr. Cardin’s name penetrated his consciousness as that exotic apparition — a “French fashion designer.”

Fashion designer, in the 1960s, was all but synonymous with gay. Conceiving of an influential creative gay human somewhere on the other side of the ocean, “imprinted possible futures on my brain,” Mr. Pierson noted this week on Instagram.

Once, he wrote, he managed to score a sweater vest in Filene’s Basement in Boston bearing the Cardin logo. Once, he got a phallic bottle of Cardin cologne for Christmas. “I don’t really remember being embarrassed by it,” he wrote.

And, once, after Mr. Pierson had become a celebrated artist whose sexuality is indivisible from his practice, he was introduced to Mr. Cardin at a party at Maxim’s in Paris. “I was bowled over,” he said. “I may have shed a tear.”

3. He dressed Jane Jetson, sort of.

A website for the Pierre Cardin museum in Paris quotes the designer’s grammatically clunky credo: “The clothing I prefer is the one I create for a life that does not yet exist, the world of tomorrow.” That tomorrow was, as Italo Zucchelli, a former men’s wear designer for Calvin Klein, said this week, “conceived for space with designs that were at the same time minimal and extreme.”

Nothing looks more dated than yesterday’s idea of tomorrow. And yet, there exists somewhere in the pop culture continuum a timeless clip from an episode of “The Jetsons” that commemorates a bright moment at the dawn of the space age when enthusiasm for space exploration and a utopian future was at its zenith. It is a moment belonging also to Pierre Cardin.

Jane Jetson has bought a new dress on closeout at the Satellite Shop. The designer is Pierre Martian. The dress cost just $10.98, as the intergalactic housewife tells her friend Gloria on a teleporter before beaming her into the room. “And $50 for the extension cord,” she adds.

That dress is a cartoon version of Mr. Cardin’s celebrated 1967 “robes électroniques,” which were covered with blinking LED embroidery. “It looks gorgeous on you, Jane,” Gloria says of a frock that blinks and changes hue as Jane applies green lipstick from a spray can, looking not at all unlike Lady Gaga, a later and devoted Cardin fan.

4. He kept up on current events.

This is something that can by no means be said of every fashion designer. Although Mr. Cardin would not have called himself a feminist, his designs clearly took note of the movement, said Matthew Yokobosky, the senior curator of fashion and material culture at the Brooklyn Museum.

When Mr. Yokobosky was researching “Pierre Cardin: Future Fashion,” a 2019 retrospective, he spent time at the designer’s Paris boutique, an Aladdin’s cave presided over by Maryse Gaspard, Mr. Cardin’s original model, who worked for him for more than 50 years.

“She explained how his work was a departure from all the overdone postwar stuff,” Mr. Yakobosky said. “Cardin was really looking. He knew women had jobs, were running around and wanted freedom. Unlike other designers, he always showed his designs with flats.”

5. He was an even better businessman than designer.

A lot has been written about Mr. Cardin’s licenses, which in the late 1980s amounted to more than 800 products bearing his name — key chains and pickle jars among them. Yet, unlike designers whose proliferating licenses threatened to dilute labels and sink reputations, he kept hold of his company and the real estate occupied by his shops.

Operating largely without bank loans, he retained a core identity by maintaining classic styles in regular production (the 1960s stuff can still be ordered from the Cardin shop on Rue du Faubourg Saint-Honoré) and staging retrospectives to remind the fashion-buying public of his existence. Anyone who ever sat through a Cardin greatest hits show — true feats of endurance — would agree with an observation Andy Warhol once made in his diary, that Mr. Cardin clearly kept everything.

6. He was not averse to a fairy tale.

After the announcement of Mr. Cardin’s death, an image torrent flooded Instagram. Much of it involved the designer’s house in the South of France, the famous Bubble Palace. With its domes and tubes and tunnels and Teletubby elevations, the 10-bedroom house (with three swimming pools and a 500-person amphitheater) is purportedly a testament to the designer’s radical eye.

This assumption that the house had been inspired by the eye of fashion’s foremost futurist was not one Mr. Cardin was ever at pains to dispel. The trouble is that Mr. Cardin was not the original patron of the Bubble Palace.

Placed on the market in 2016 for $355 million, according to WWD, the Bubble Palace was originally commissioned by and built, beginning in 1975, for the French industrialist Pierre Bernard. It eventually sold to the canny Mr. Cardin in 1992. Mr. Bernard, an obscure figure now, made his considerable fortune by way of the least futuristic of technologies: He owned car dealerships.