Paulina Porizkova Responds to Ageist Critics on Instagram: 'I Think I Look Pretty Good in Lingerie' 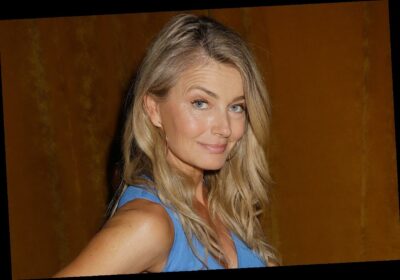 Paulina Porizkova is reflecting on ageist criticism of her scantily clad Instagram photos.

During an appearance on Friday's episode of The Tamron Show, the model, 55, said she "spends a lot of time pondering" the backlash she receives on social media because the Czech-born beauty was praised for her figure in the early days of her career.

"In my 20s, I was celebrated for showing up in lingerie. I was getting a lot of money for it and everybody loved me," Porizkova told Hall in an exclusive first look of the episode (below). "In my 50s, I still think I look pretty good in lingerie, but the reaction is reviled, obviously not by everybody, but yeah, there's a fair amount of backlash."

The star continued, "I think it's that when you get older when there's a certain sort of invisible boundary that happens in maybe your mid 40s where you, I guess you don't look fertile anymore, it's a menopausal thing."

In February, the candid star opened up about body confidence in an Instagram post, sharing a naked photo of herself alongside a caption that was "inspired by the brouhaha" surrounding braless pictures actress Elizabeth Hurley, also 55, had recently posted to social media.

"When I was in my twenties and thirties, the less I wore – the more popular I was," she began in the caption. "In my forties, I could walk around practically naked and illicit nothing more than a ticket for public indecency."

"At fifty, I am reviled for it. 'Put on your clothes, grandma. Hungry for attention, are you? A little desperate here? You're pathetic,' " Porikova continued, referencing some of the negative comments she's received.

The former America's Next Top Model judge went on to ask, "Why is sexiness and nudity applauded in a woman's youth and reviled in her maturity?"

"Because of men," she wrote. "Men are biologically programmed to spread their seed, inserting themselves into fertile containers which advertise their viability through youth."

"And what does this say for women like myself, who need to be validated by the male gaze?Insecure," Porizkova added. "The only thing that is pathetic here is allowing others to set your priorities."

She concluded her post with two hashtags that read "sexy has not expiration date" and "between JLo and Betty White."

In the past, Porizkova has been outspoken about double standards in aging, particularly when it comes to women in the public eye.