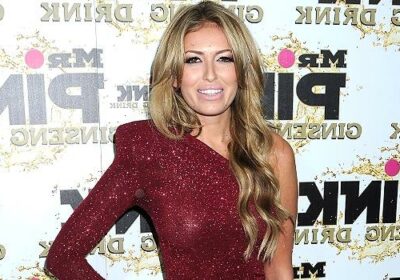 Paulina Gretzky is gearing up for her upcoming wedding in the best way possible & she looked fabulous when she rocked a sexy cutout white dress.

The wedding we’ve all been waiting for between Paulina Gretzky, 32, and Dustin Johnson, 37, is almost here and we could not be more excited. Paulina, daughter of the famed hockey player, Wayne Gretzky, looked fabulous when she posted a photo of herself in a sexy long-sleeve white dress with a plunging neckline. The mini dress featured buttons down the front and a gaping cutout at her waist revealing her toned abs. She styled her frock with a pair of nude heels and effortless beach waves.

Paulina posed in the photo alongside her dress designer, Vera Wang, her best friend, Kristina Melnichenko, and her hairstylist, Jeremy Cohen. Paulina captioned the photo, “let the countdown begin.” The crew was altogether at the Vera Wang bridal shop in New York City.

Paulina and Dustin officially got engaged in August 2013 after seven months of dating and the couple shares two sons together, Tatum, 6, and River, 3. While the couple has been engaged for eight years, Paulina doesn’t think it’s strange, in fact, she spoke about her long engagement when she appeared on the May 20 episode of the Pillows and Beer podcast hosted by her Southern Charm friends, Austin Kroll and Craig Conover.

Speaking about her wedding plans, Paulina said, “I just do things my own way. I don’t want to listen to how everyone else views things. I fell in love with someone so fast and we had the best thing that ever happened to us, happen so quickly. The most important thing was my kids, Dustin, and my career. Those things took precedent. Those things had to be established. So, after he won the Masters, I said let’s do it, this makes sense.”