Partners in Business and Adventure 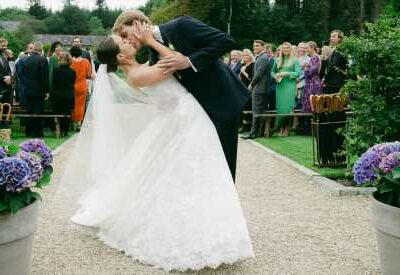 When Caroline Matthews is asked where she first met Connor McCarthy, she says simply, “We met in graduate school.”

Ask Mr. McCarthy, a self-described adventurer, that same question, and he will say, “We met hiking in the Himalayas on a Buddhist meditation retreat.”

As it turns out, both versions are true.

“Connor’s version of how we met is more colorful than mine, as it is more of a reflection of who he is,” said Ms. Matthews, 32.

She first crossed paths with Mr. McCarthy, 33, in December 2016 while both were studying for an M.B.A. at Stanford, which sponsored a trip to Bhutan. The theme was “the Business of Happiness.”

“Caroline was so beautiful and intelligent and she loved the outdoors,” said Mr. McCarthy, who graduated from the University of Georgia. “I needed an adventure partner who could travel the world with me, while at the same time provide some direction in my life. Caroline turned out to be that person.”

Ms. Matthews graduated from the University of Pennsylvania and has two master’s degrees, an M.B.A. from Stanford and a master’s in public administration from Harvard. She knew in May 2017, just five months into her relationship with Mr. McCarthy, that she would indeed be his partner in all kinds of unexpected twists and turns.

She remembered driving from the wedding of one of Mr. McCarthy’s friends in Chattanooga, Tenn., to the airport in Atlanta, where they would board a flight back to Stanford: “On the way to the airport, Connor surprised me by saying, ‘Do you mind if we stop by my sister’s house here in Atlanta, she just had a baby and my parents are there visiting,’ recalled Ms. Matthews, who had not imagined that this would be the day she met his parents for the very first time. “I said yes, and thought to myself, ‘Life will never be dull with Connor.’”

There would be plenty of adventures to follow, in places like Israel, Uruguay, Argentina, Mexico and Ireland (Mr. McCarthy is a dual citizen of Ireland and the United States.) And there was less far-flung fun to be had, too, like their July 2017 ski trip in Park City, Utah, and the Halloween party they attended in Yonkers, N.Y., in 2018, when he dressed as a priest and she a nun.

Mr. McCarthy and Ms. Matthews fit in perfectly with the other’s family. “My family is so grateful that Caroline is in my life and that she loves me the way she does,” said Mr. McCarthy, who then began to cry.

Together, the two also own Canyonlands Fund, a New York-based investment firm they founded in January 2020.

“We started an investment firm to invest in youth development companies, specifically overnight camps,” said Ms. Matthews. “The idea was to marry our passion for education, the great outdoors and conservation.”

They were married Sept. 2 at the Sodality Chapel at Spring Hill College in Mobile, Ala., where the Rev. William George, a Roman Catholic priest, performed a ceremony before seven guests.

Among those guests were the bride’s parents, Kathleen Matthews, the former chairwoman for the Maryland Democratic Party, and Chris Matthews, the retired host of MSNBC’s “Hardball with Chris Matthews.” Also attending were the groom’s parents, Caroline McCarthy, a retired lawyer at the firm Phelps Dunbar in Mobile, Ala., and Brian McCarthy, a lawyer at McDowell Knight Roedder & Sledge, also in Mobile.

On Sept. 10, the couple took part in a celebration ceremony at Ballynahinch Castle in Connemara, Ireland. It was led once again by the Rev. George, who, this time, stood before the couple and their parents and 90 guests.

“Connor brings so much energy to our relationship,” Ms. Matthews said. “He makes my life so much more fun to live.”