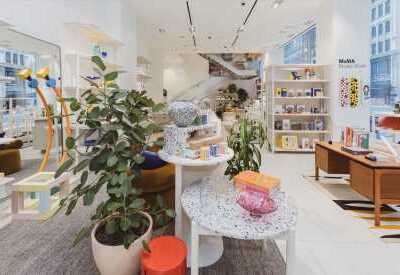 Like others during the pandemic, Olivia Kim, the vice president of creative projects at Nordstrom, spent a lot of time looking at dishes and other housewares. In her case, it was not just because she was working from home, but also because she was putting together a home goods department.

That department, on the first and second floors at Nordstrom’s flagship in New York, opens Friday and has a mix of mainstream and smaller brands, with an emphasis on less well-known names.

New York City-based labels have a big presence, including Thompson Street Studios and Wooj. There is also a section devoted to goods from the MoMA Design Store, including colored pottery from the Copenhagen label Raawii (from $72), pastel side tables from Kartell (from $165), and neon Mondrian-inspired vases by MoMA’s in-house design team ($100).

“We opened the flagship five months before the city shut down, and after what happened in the last 18 months, we felt it was important to support our local makers and be an anchor in the community,” Ms. Kim said.

Beverly’s, a home and kitchen pop-up that originated on the Lower East Side and was created by the fashion stylist Beverly Nguyen, gets a home in an expansive corner spot. Casa Shop, a jewelry and décor boutique from Richmond, Va., has a wall of delicate and colorful vases, martini glasses and other glassware, both vintage and new.

As part of the social justice movement known as the 15 Percent Pledge, Black-owned brands, including the Harlem Candle Co., Goodee and Estelle Glassware, are also featured prominently. “We wanted to show the diversity of the community of creators we’ve cultivated,” Ms. Kim said.

While the lower floor emphasizes design items, the upper floor skews more practical. Bedding by millennial favorites like the Citizenry, Boll & Branch and Casper are tucked next to weighted blankets by Bearaby. There is a section for Dyson vacuum cleaners and air purifiers, Vitamix blenders and Moccamaster coffee makers. A kitchenette is slotted into a corner, so expect to see cooking demonstrations and other in-store events.

Designer candles dot the space liberally, made by Otherland ($36), Mala the Brand (from $30) and Better World Fragrance House, started by Drake (from $48).

One thing you won’t find? Large furniture. While there are side tables ($450) and chairs by the artist Mark Hundley ($550) and a sweeping green Memphis Milano floor lamp ($3,500), most items fit in a shopping bag. (And no, the terrazzo tables displaying the wares are not for sale.)

While the store caters to New Yorkers, Nordstrom also knows that plenty of tourists will come in for a look, which is why the entrance features a kiosk full of souvenirs, all priced at $15 or less. Unsurprisingly, it’s all New York City themed.