Michael Strahan Collection to Be Sold in Men’s Wearhouse As Tailored Brands continues to navigate through the Chapter 11 process, it has snagged a well-known face as its latest partner: Michael Strahan.

The former football player-turned-media presenter is bringing his Collection by Michael Strahan line of tailored clothing and denim to the corporation’s Men’s Wearhouse stores starting Nov. 11. Up until about a year ago, the line had been exclusive to J.C. Penney. Constance Schwartz-Morini, Strahan’s business partner in SMAC Entertainment, a talent agency, branding and production company, said that deal was renegotiated last year after they signed with the NFL to create the MSX by Michael Strahan for NFL capsule collection for the Super Bowl in January. That line has since been expanded to cover men’s and women’s team apparel for all 32 professional teams.

In a move to further increase its reach, the deal with Tailored Brands brings the Collection line to 57 Men’s Wearhouse stores as well as online. It is starting out small, Schwartz-Morini said, with three staple suit colors — black, blue and gray — and straight-leg jeans in four washes. The suit separates, which will include big and tall sizes, will retail for $139.99 for jackets, $60 for pants and $199.99 for the full suit. The denim will range in size from 30 x 30 to 44 x 32 and retail for $49.99.

Fashion and Car Collaborations Throughout the Years

“We’re calling it work leisure,” Strahan said. “The tailored business has been tough, no one is putting on a suit to go to work, but they still want to be presentable when they get on Zoom at home. So work leisure is the way to go.”

Going forward, the plan is to significantly expand what will be sold at Men’s Wearhouse. “We want to add sweaters, fashion button-downs, chinos, an elevated performance line — as long as Men’s Wearhouse has the room for us,” Schwartz-Morini said with a laugh.

Strahan said his hope for the new deal is to attract a younger, more fashion-forward customer seeking “quality and affordability” that will allow the brand to “spread our wings.” Although suits may be challenged, Strahan said he’s pleased with the  performance of the denim as well as the NFL collection. “I love what we’re doing with the NFL, it brings me back to my roots.”

The Strahan line doesn’t have its own e-commerce site, his partner said, so it felt the impact when retail stores were forced to close earlier this year. In addition to Penney’s, the Collection and MSX lines are sold on HSN, Fanatics and other sites. But now that stores have reopened, Schwartz-Morini said the “numbers at Penney’s are increasing,” providing a note of optimism as the brand prepares to enter Men’s Wearhouse.

“Michael and Tailored Brands have the same goal in terms of helping all customers look and feel their best for their memorable moments as well as everyday occasions with a great selection of clothing at accessible prices,” said Carrie Ask, chief customer officer of Tailored Brands. “Michael also shares our ideals of treating everyone with the same respect, regardless of background and, as such, we believe this pairing makes perfect sense for our customers.”

Unlike many celebrity brands, the Strahan line has continued to grow since it was launched in 2015, adding a variety of categories to the mix. “I’m committed to building this business. It’s not a quick hit, get a check and move on. We run the brand, we own the brand. I’m not passive and I don’t just throw my name on something for vanity. We want to keep expanding. We’re in this for the long haul,” he said.

Schwartz-Morini agreed, and said the Men’s Wearhouse team is also determined to make it work. “We all jumped off the bridge together holding hands.”

In terms of marketing, Strahan continues to be the face of the brand. “Michael wears it everywhere he goes,” she said, adding that the style is “authentic and true to who he is.” So in addition to his daily duties on “Good Morning America,” as well as “Fox NFL Sunday” and the “Thursday Night Football” pregame, the brand also dresses the other Fox NFL anchors, she said. 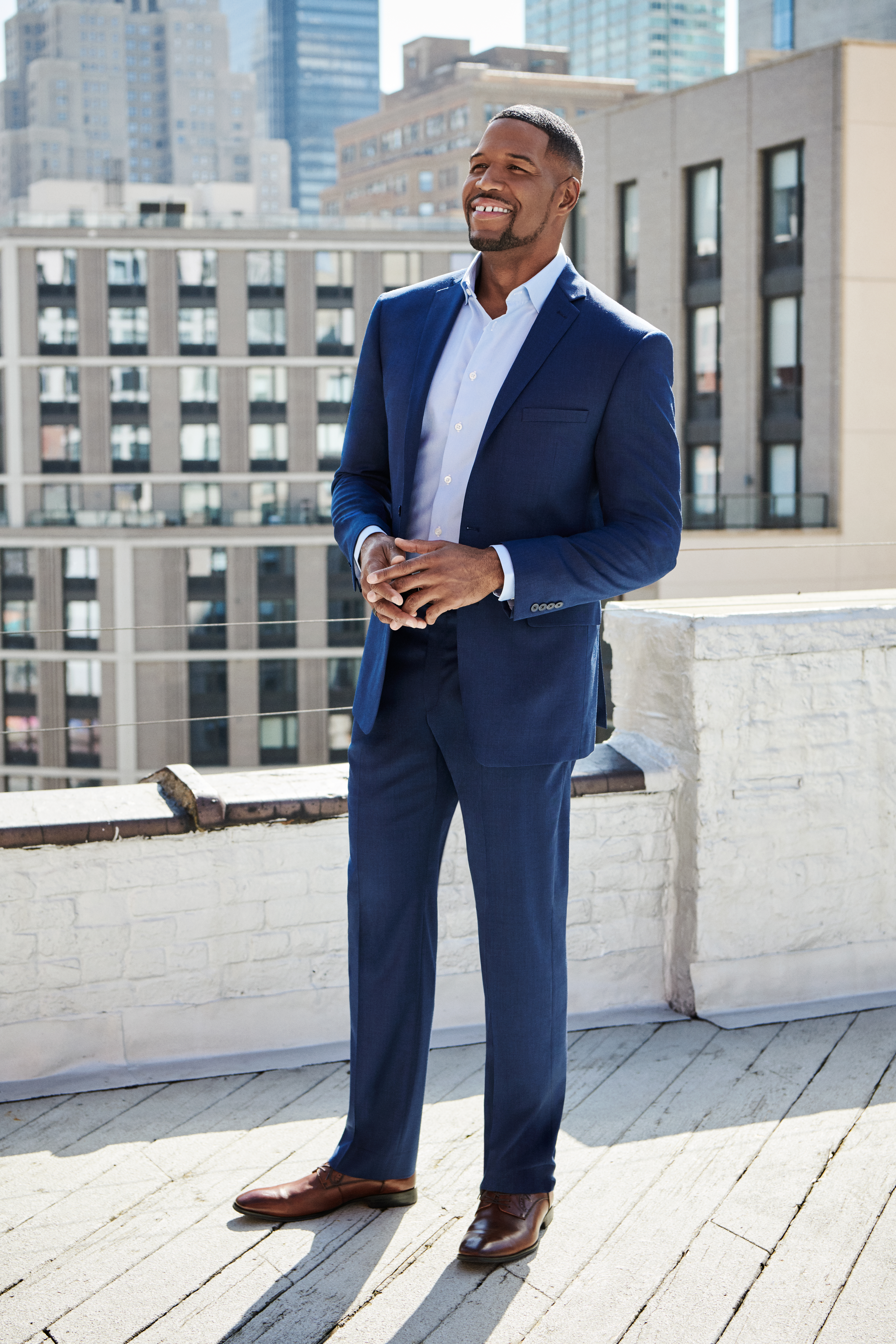 Michael Strahan Collection will be available at 57 Men’s Wearhouse stores and online.

Strahan said he continues to wear a suit every day on “Good Morning America” and on Fox — “It’s more organic to my life. But when I’m not wearing a suit, I’m casual. It’s hard to have a suit up to my throat every day.”

To promote the launch at Men’s Wearhouse on Nov. 11, which is Veterans Day, Men’s Wearhouse donated full wardrobes from the Collection to three veterans who are part of the organization Merging Vets and Players, which was founded by Jay Glazer and Nate Boyer, friends of Strahan, and helps veterans and retired players transition to civilian life. Strahan surprised the veterans at a Men’s Wearhouse store in New York City and a video of the moment will be released on social media.

In addition, the companies are working with historically black colleges and universities, and Deion Sanders, who was just hired as head coach for Jackson State University in Mississippi. To dress the 100 players on his team in Michael Strahan Collection. “Deion is a fashion icon,” Schwartz-Morini said, “and we wanted to be sure all his football players would be dressed to the nines.” The players will be wearing navy blazers, red pants and white shirts, she said.

“On game day, the Jackson State Tigers don’t expect to just win on the field but off the field,” said Sanders, who has embraced the nickname Coach Prime. “We will look good and feel good, which constitutes us to play good. Coach Prime and Collection by Michael Strahan are a winning team.”

Strahan, who attended Texas Southern University, an HBCU school, said Sanders was always into kids and coaching and he was happy he could bring his collection to the athletes.

Beyond that, Strahan has been working on a four-part HBO documentary that had its debut last night called “The Cost of Living.” It tells the story of the struggling St. Frances Academy football team in Baltimore and how the team was able to save its program. In addition, the “$100,000 Pyramid” game show that he hosts is in post-production, “‘GMA’ is going great and we’re in the middle of a football season we’re fortunate to have so they can play games and have a distraction on Sundays.”

Strahan admitted that when he first walked back into the studio to film “GMA,” without an audience and with a skeleton crew, it was “frightening. But looking back, it gave everybody at home some normalcy and the chance to see familiar faces every morning.”

In other Tailored Brands news, a confirmation on the company’s reorganization plan is scheduled for Thursday afternoon. In August, the men’s wear retailer filed Chapter 11, another victim of the coronavirus. The company’s situation was exacerbated by its dependence on tailored clothing and the debt load it had accumulated in its $1.8 billion acquisition of Jos. A. Bank Clothiers in 2014.

Under the terms of the deal, which was filed in the U.S. Bankruptcy Court for the Southern District of Texas, the retailer filed a pre-arranged financial restructuring plan that is expected to reduce its debt by at least $630 million. It received commitments for $500 million in debtor-in-possession financing. Since then, it has said it would close up to 500 of its 1,400 stores in the U.S. and Canada.

In a monthly operating report filed on Oct. 20, the company reported an operating loss of $27.3 million on sales of $146.1 million.

The creditors committee in the case has objected to the reorganization plan, arguing that it relies on an unduly low valuation of the enterprise and undercuts recoveries for general unsecured creditors.

In Chapter 11, secured lenders are at the top of the recovery priority list — but that doesn’t necessarily mean they’ll always receive full recoveries on what they’re owed. If the debt owed to a group of secured lenders exceeds the value of the assets securing that debt, then that excess amount they are owed can be treated as an unsecured claim. In bankruptcy parlance, such a claim by a secured lender is called a deficiency claim, and can be lumped together with the claims of general unsecured creditors including landlords and vendors.

But what happens if the parties don’t agree on the value of the secured assets? Here, the creditors committee is arguing that the value of the assets is high enough to satisfy the secured lenders claims — in this case, the term loan lenders — such that there should be no deficiency claims that general unsecured creditors should share to share their pool of recoveries with.

Under the proposed Chapter 11 plan, term loan lenders would get 97 percent of the reorganized equity while a group of general unsecured creditors would get the other 3 percent, the creditors have said. The creditors committee is arguing that unsecured creditors shouldn’t have to split that 3 percent with term loan lenders making deficiency claims, because the company’s assets are already valuable enough to satisfy those secured claims.

The Tailored Brand debtors have suggested an enterprise value of $850 million, while the creditors committee’s own valuation expert has projected that the company’s total enterprise valuation after its bankruptcy would be roughly $1.5 billion, according to an objection filed this month by the creditors’ committee.

The total amount of general unsecured claims in the case is estimated to be roughly $430 million.

The unsecured creditors have also raised a number of other issues in their objections, which are expected to be heard at the confirmation hearing. Tailored Brands had no comment.