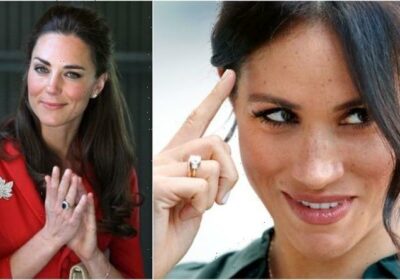 The Duke and Duchess of Sussex married in 2018, and Meghan’s engagement ring is officially the most Googled ring in the UK. The research, by creative resource Design Bundles, analysed 100 of the most popular engagement rings to discover the top 10 most sought-after rings in the UK, based on Google searches. Meghan’s ring receives nearly 53,000 searches a year, and searches for ‘Meghan Markle engagement ring’ nearly triple the average searches for all other rings from the list.

The Duchess of Cambridge’s engagement ring is the UK’s second most Googled ring, with over 43,000 searches a year.

The Duchess of Sussex’s trilogy ring was designed by Prince Harry himself in 2017.

This ring rakes in almost three times the average yearly searches for all rings on the list of this study.

Meghan Markle and Prince Harry made their media premiere as an engaged couple on November 27, 2017, just over a year after they initially confirmed their relationship to the public.

The royal couple posed for photos outside Kensington Palace, where Meghan showed off her new engagement ring.

Eventually, the ring was altered, and Harry enlisted Lorraine Schwartz to resize and reset the ring so that the original simple band was replaced with a thin, yellow gold band set with micro-pave diamonds.

The UK’s second most-searched-for engagement ring is Kate Middleton’s.
The Duchess of Cambridge’s ring is a 12-carat, oval blue sapphire with a halo of diamonds.

It was famously Princess Diana’s engagement ring before hers and pulled in more than 43,000 searches over the past 12 months.

This ring is still hugely popular, as it still manages to double the average searches for the other rings on the list.

Princess Margaret’s engagement ring is also one of the nation’s most Googled, pulling in 12,000 searches a year.

The “sumptuous ruby trilogy ring”, according to the study, is surrounded by smaller diamonds.

It was designed by her future husband Anthony Armstrong-Jones to resemble a rosebud, after Margaret’s middle name Rose.

The engagement ring belonging to Grace Kelly also makes the top 10, with 10,560 searches in the past year.

The movie-star turned Princess’s ring, given to her by Prince Rainier of Monaco, was a 10-carat, emerald-cut diamond from Cartier, worth nearly £3million.

Princess Beatrice’s ring ties with Grace Kelly’s as the UK’s sixth most Googled, raking in nearly double the yearly searches of her sister’s: Princess Eugenie’s, which did not make the top 10.

The 3.5-carat diamond, flanked by two smaller diamonds, was given to Princess Beatrice by her husband: Edoardo Mapelli Mozzi.