Meghan Markle and Prince Harry, 34, are preparing for the birth of their first child together, who could be born any day after they revealed the baby was due in spring.

The Duchess of Sussex was known for her chic wardrobe and this did not change after her pregnancy was announced.

She has been spotted in a number of pricey designer frocks include looks from Dior and Givenchy.

On top of her pricey taste in maternity fashion, Meghan has also opted to pair these looks with some very expensive jewellery, racking up an eye-watering bill on the looks.

Throughout her pregnancy, Meghan has spent a jaw-dropping £482,141 on clothes, according to lovethesales.com.

That works out at around £6,261 per outfit, and a third of the sum is down to flash jewellery, the website revealed.

She paired the look with a pair of £490 black bow heels by designer Aquazzura, meaning that her outfit totalled nearly £10,500 before even considering the cost of her jewellery.

During a trip to Morocco in February, Meghan spent a remarkable amount of money on her outfit as she attended an evening reception at British Ambassador’s residence, Rabat.

Meghan turned heads as she wore a Dior cape dress estimated to be worth £90,000. 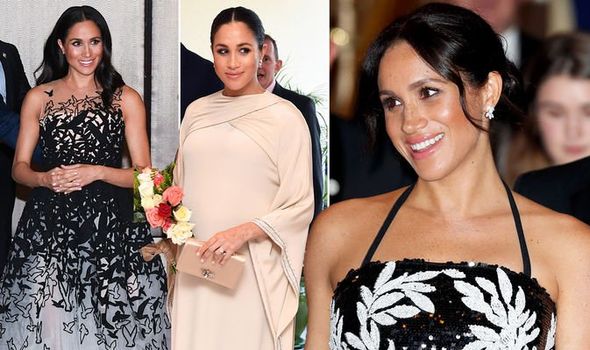 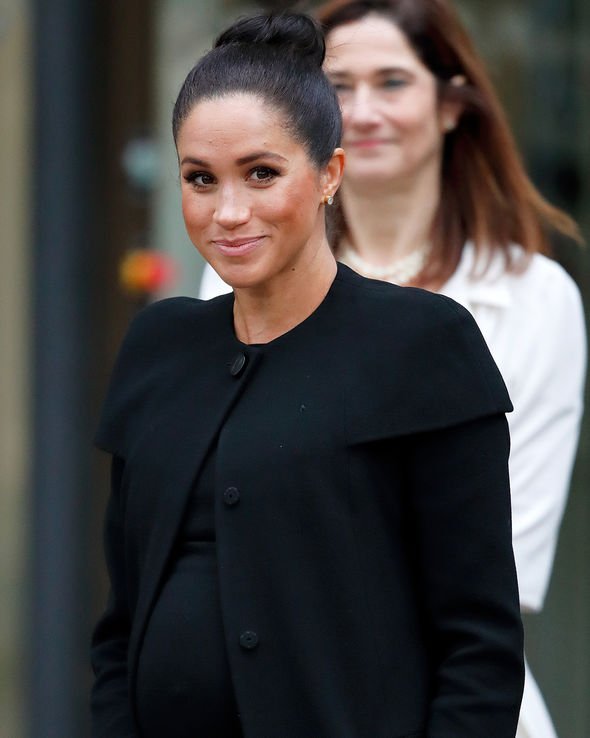 During her tour across Australia, Fiji, Tonga and New Zealand, Meghan showed off the first of these as she wore a black and maroon coat, estimated to have cost £2,000.

Along with a list of luxury garments, the Duchess has chosen to complement her outfits with some jewellery that would break the bank for most.

This included a pair of Butani diamond drop earrings worth £21,326 and Princess Diana’s aquamarine ring worth £74,893.

Despite spending nearly half a million on her look, the stylish Royal also opted for some high-street brands.

In January, she was spotted wearing the much more affordable H&M ‘Mama’ dress which cost just £24.99. 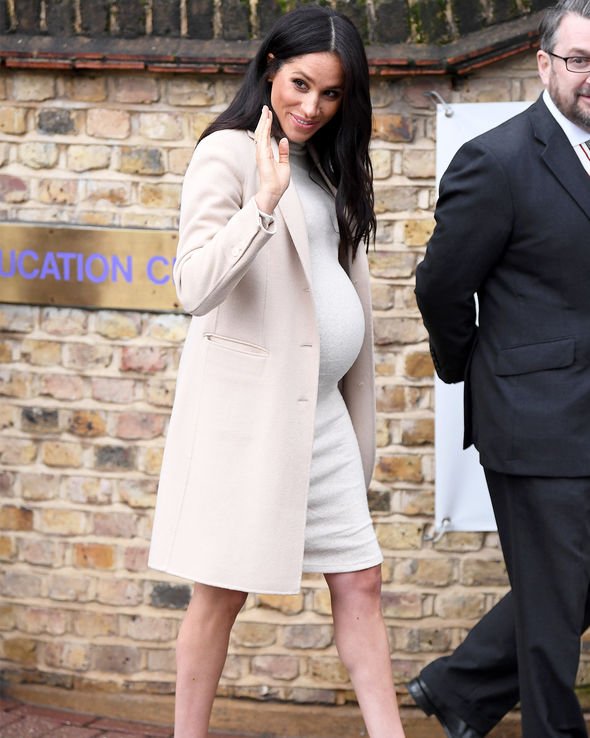 Throughout her pregnancy, Meghan has displayed her love of expensive designers, and her most-worn brand was Italian designer shoe brand, Aquazzula.

She chose to wear their designs nine times throughout her pregnancy, spending thousands of pounds on the shoes.

When it came to her favourite clothing brand, Meghan has stuck with luxury designer Gucci more than any other, according to LovetheSales.com.

As they get ready for their first child, the Duke and Duchess of Sussex reportedly took a ‘babymoon’ to help them relax before the new arrival.

According to reports, the couple stayed in the luxury Heckfield Place Hotel in Hampshire for three days, which would have set them back £33k.

Who is Meghan Markle? Quick profile

Her father was previously married to Roslyn Loveless and Meghan has two elder half sibling – sister Samantha Markle and brother Thomas Markle Junior.

Meghan’s first television appearance in the USA was in an episode of the medical drama General Hospital in 2002.

She later moved on to roles in CSI, Without a Trace and Castle along with bit parts in Hollywood films including Get Him to the Greek, Remember Me and Horrible Bosses.

Meghan was also a “briefcase girl” on Deal or No Deal – but her most famous role was as Rachel Zane in legal drama Suits, which launched in 2011.

She was written out in the finale of the seventh series when her character got married, which aired in April 2018 – just before she got married herself.

Meghan Markle’s career in television has gone hand-in-hand with her support for causes close to her heart.

She wrote about the stigma around menstrual health in an article for Time magazine and was a Global Ambassador for World Vision Canada – with whom she travelled to Rwanda for the charity’s Clean Water Campaign.

And her commitment to gender equality has seen her work with the United Nations – receiving a standing ovation in 2015 for her speech to mark International Women’s Day.

In September 2011, she wed film producer Trevor Engelson, who she began dating in 2004.

She was in a relationship with celebrity chef Cory Vitiello for almost two years, before they broke it off in 2016 but the two remain good friends.

And in June 2016, she met Prince Harry on a blind date set up by a mutual friend.

Their relationship began in October that year and just over one year later, on November 27, 2017, the pair announced their engagement.

Some have claimed Meghan Markle is the first mixed-race member of the Royal Family.

Historians are still arguing about Queen Charlotte, the wife of King George III.

But Meghan will be the first royal to openly embrace a mixed-race heritage.

She has written about the difficulties of being a biracial actress in Hollywood as she claims she is not black enough for some roles and not white enough for others.