In terms of a fashion spectacle it's going to be awfully hard to top Greece-born, London-based fashion designer Mary Katrantzou's spring-summer show.

Held earlier this month at the Temple of Poseidon (built between 444-440 BC) in Athens after Paris Fashion Week, the show closed out the four-city sartorial circus that is fashion month. It was a joyous celebration of Katrantzou's 10 years in the business, her Greek heritage and of all the people involved in a show of this scale. Italian jewellery house Bulgari, whose founder Sotirios Voulgaris was Greek, loaned her millions of euros worth of jewels for the show, ticket sales went to the children's charity Elpida (of which Katrantzou is patron) and at the end many of the weary, cynical fashion pack stood up and cried. 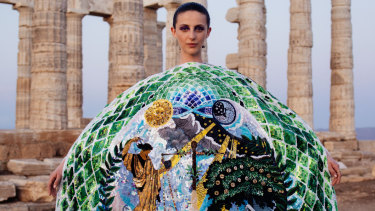 Katrantzou's work — incredible prints, extravagant dresses, her madcap embellishments, her "lampshade" skirt silhouette — have earned her celebrity fans such as actress Cate Blanchett, former United States first lady Michelle Obama and pop icon Beyonce. Women around the world collect her one-off pieces. But more than that,  her focus on craft, or as a recent US Vogue review put it, her "demi-couture", means she is right on message when it comes to the reckoning the fashion and luxury industry is having on issues of sustainability and desirability.

"When you work in the fashion industry you always have to be in sync with the times, as it is such a fast-paced industry," says Katrantzou of her commitment to craft and tricky techniques in her designs.  "At the same time for me it is extremely important to create timeless pieces by employing a high level of craftsmanship and execution while offering clothing suitable for the modern woman and her everyday life." 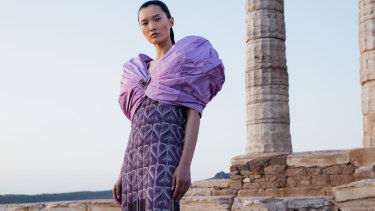 Mary Katrantzou’s epic show at the ancient Temple of Poseidon on Cape Sounion, in Greece.Credit:German Larkin supplied via Bvlgari

Katrantzou launched her brand in 2008, in the midst of the financial crash doldrums and in a time when pared-back minimalism reigned. This only served to push into her aesthetic harder.

"Developing my own vision and voice at a time of prevalent minimalism, pushed me to have the strength of my own conviction," she says. "I had to be bold  … but that's what separated me from other designer brands starting out at the same time.

"I wanted our clothes to lift the wearer's mood, allow them to express themselves, while feeling the most confident version of themselves. As my work evolved, my focus shifted on the narrative. I want to tell a story with each collection and offer a customer a unique perspective on fashion." 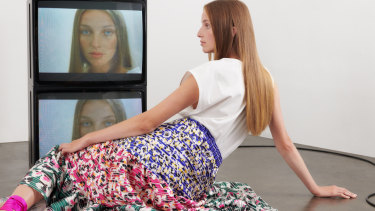 A skirt from Mary Katrantzou’s collection for The Outnet.

Fashion critic Alexander Fury wrote of her Athens show, which was titled "Wisdom Begins in Wonder": "[Katrantzou's] line reaches a far more internationally based clientele, some of whom collect her work season by season, as souvenirs of her themes, almost as they also buy works of art. Strangely, then, the most extravagant pieces in this collection can be judged as her most commercial— such as the intensely beaded, multicoloured dresses smothered in swirlingly collaged motifs of flowers and vegetation. In an era where mass production makes less and less sense for either designers or for wealthy consumers seeking rarity, this is increasingly the way planet fashion is spinning."

This message, along with embellishment and bold colour, was also seen at the likes of Valentino, Louis Vuitton and Loewe during Paris Fashion Week. Collections that were bold and intricate, or bright and unlike anything else, proved a balm for dreary news headlines and uncertain futures. 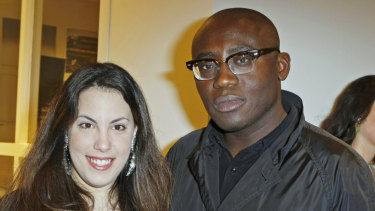 Katrantzou's next project is a collaboration with luxury discount retailer The Outnet on an exclusive capsule range of 14 pieces. Launching on the site at the end of the month, the collection uses fabrics from Katrantzou's archives, reworking them into a collection of printed dresses, blouses and a jumpsuit.

"In the past 10 years, we have created so many different prints and designed so many of our own fabrics. There is so much potential in re-contextualising your own work," says Katrantzou. 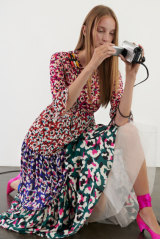 A dress from Mary Katrantzou’s collection for The Outnet.

For Katrantzou, collaborations such as this one are the chance to think, and work, differently. "I'm inquisitive as a person and that curiosity has been the basis of every collaboration I have ever done. What I enjoy most is to work with respective leaders in their fields to come up with a product or collection that is unique and extends our visual vocabulary as a brand," she says, noting that her brand has more projects in the pipeline, including in the homewares category.

As for fashion's current reckoning Katrantzou, who tends to only wear black herself ("Black is a working uniform for me", she says. "I'm surrounded by colour every day and it has become my palette cleanser.") is optimistic. "The fashion sector is currently being challenged and every brand is trying to carve its own path," she says.

"What the industry needs is to embrace an ethical compass that will lead the way in environmental protection, social issues and ethical standards. We are a long way away but in my opinion the signs are positive."

Her advice for up and coming designers is similarly galvanising. "The fashion industry is a tough environment that requires razor-sharp focus and admirable work ethic and drive. The only thing that I could advise someone is to be true to themselves, know their strengths and abilities and don’t be afraid to push the boundaries of what is considered desirable now, as fashion is ever changing."

Mary Katrantzou's capsule collection for theoutnet.com will launch October 30 with pieces ranging from around $770 to $2720. 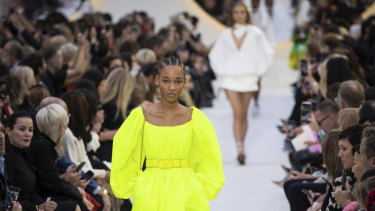 The secret to wearing colour? According to Katrantzou it's doing so with conviction. "It has to be authentic and you need to feel confident with what you are wearing. Colour and pattern are a great choice for every woman who wants to stand and they are both great non-verbal communicators," she says. "Fashion is all about projecting your values and personality, so if you follow that you can never go wrong."