Home » Fashion » Laughing All the Way to the Wellness Industry

Laughing All the Way to the Wellness Industry 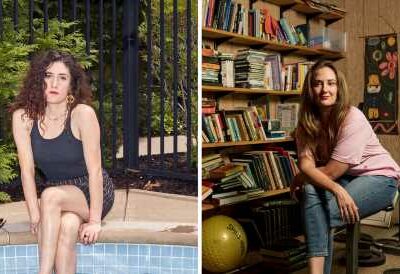 At first glance, “Poog,” a podcast about the wellness industry, seems to be a gag. The name is Goop spelled backward, after all.

Kate Berlant and Jacqueline Novak, the comedians who started the podcast in November, are equal parts irreverent and earnest on subjects like face yoga, colonics, optimizing one’s potential during menstruation, lymphatic drainage and crystals. The premise of “Poog” is not to debunk or even fact-check wellness trends, but to playfully explore them with a curious audience.

“I think people wonder if it’s a parody because they can’t believe we have the audacity to act that intense about hyaluronic acid,” said Ms. Novak, 38, from her home in Hollywood.

The “hags,” as they call themselves, have different areas of interest. Ms. Novak leans toward esoterica and the metaphysical: ghosts, astral projection, out-of-body experiences, E.M.D.R. therapy and skin care, to name a few.

Podcasts are big business now, and so is wellness. A survey of digital media consumer behavior, conducted by Edison Research, reported that in 2020, monthly podcast listeners in the United States topped 100 million for the first time. As for wellness, its market value is estimated to be in the trillions of dollars.

Wellness is a market that thrives on the celebration of one’s own specialness, where “You go, girl” has become less a rallying cry and more an endlessly looped mantra. This daily grind of onanistic boosterism can get exhausting.

Ms. Novak and Ms. Berlant could be considered the antidote, and yet they were invited into the high temple of wellness when they appeared on a Goop podcast, “The Beauty Closet,” in July.

“Because wellness and beauty are considered feminine realms in our culture, they’re derided and devalued. Berlant and Novak get at the pure sexism behind that notion,” said Jean Godfrey-June, the beauty editor of Goop and the host of the podcast. “As a woman, always getting ‘less than’ messages from the culture, all you can do is laugh, and ‘Poog’ makes me laugh.”

Though the podcast began during the pandemic lockdown, the two friends are no longer spending so much time in their living rooms. Ms. Berlant just finished filming a role in Olivia Wilde’s new movie, “Don’t Worry Darling,” and began shooting Abbi Jacobsen’s “A League of Their Own” for Prime Video.

And Ms. Novak’s one-woman show, “Get On Your Knees,” had a sold-out run at the Cherry Lane Theater in New York earlier this summer; she’s taking the show on tour next month.

From the first episode, the comedians said that part of their motivation for doing the podcast was a quest for free products. And companies delivered. “The products are coming,” Ms. Berlant said. “It’s actually stressful because there’s so many, and they’re arriving so quickly.” She added that “everything tastes better when it’s free.”

The commercialization of wellness is ripe for a skewering, but Ms. Novak and Ms. Berlant aren’t interested in myth busting.

“There’s something endlessly fascinating about listening to people whip themselves into a frenzy over products,” said John Early, an actor who has collaborated with both women for years. “I really wish for them freedom from the prison of consumerism, but I also think then we wouldn’t have such a great podcast.”

The actress Megan Mullally is a fan, as is Amy Schumer, who talked about the show on Paris Hilton’s podcast. “It really is people not apologizing for who they are and just sharing their genuine thoughts and feelings,” Ms. Schumer said.

Miranda July, the author and filmmaker, is another fan. She contacted Ms. Berlant and Ms. Novak, asking to hang out, and what started as a weekly Zoom session has shifted to meeting in real life.

“It’s comedy in its most complex form,” Ms. July said of the podcast. “This should be the basic unit of measurement of the highest human thought: two women talking.”