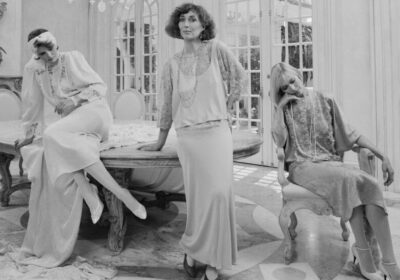 Jessica McClintock, a fashion designer whose romantic, lacy confections dressed generations of women for their weddings and proms, died on Feb. 16 at her home in San Francisco. She was 90.

The cause was congestive heart failure, said her sister, Mary Santoro.

In 1969, Ms. McClintock was a newly divorced mother and had been teaching science and music to sixth graders in Cupertino, Calif., when she invested $5,000 in a San Francisco dress business called Gunne Sax. (In creating the name, the founders, Eleanor Bailey and Carol Miller, had riffed on the idea of a “sexy gunny sack,” according to Vogue magazine.)

Soon after, Ms. McClintock became the sole owner, designer and saleswoman. She had no design training, but she could sew.

Inspired by those she called San Francisco’s “flower children,” she began making calico, lace and beribboned pastiches known as granny dresses. It was a style — a little bit Victorian, a little bit prairie — that hippies in the Haight-Ashbury section had popularized by putting together the wares of vintage clothing stores.

Gunnes, as Ms. McClintock’s dresses were known, became a cult item, and Gunne Sax became a wildly successful business. By the mid-1970s, the dresses could be found in department stores across the country. For just over $50 (the equivalent of about $250 today), you might score an ankle-length, cinched-bodice Victorian number at the Dillard’s at your local mall. 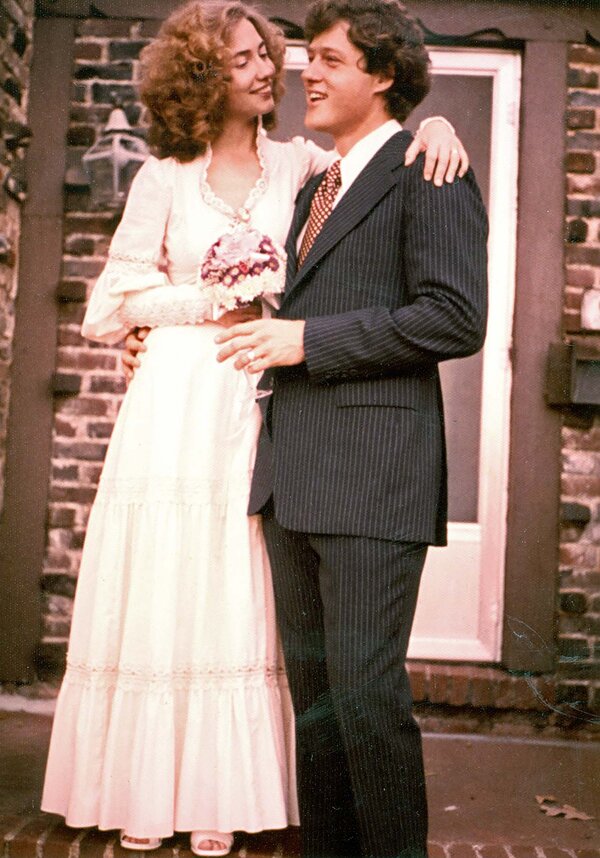 That is what a 27-year-old Hillary Rodham did for her wedding to Bill Clinton in October 1975 at their home in Fayetteville, Ark. She had completed her work for the House Judiciary Committee on the impeachment case against President Richard M. Nixon and had moved to Arkansas to be with Mr. Clinton while he ran, unsuccessfully, for a House seat. They both found work teaching at the University of Arkansas School of Law.

(He had proposed to her twice before and had twice been refused. The third time he asked, in early October, she relented. As she recalled in a phone interview, “Bill said, ‘Let’s hurry up and do it next week before you change your mind.’”)

Mrs. Clinton thought she would just throw on a dress from her closet, but her mother, Dorothy Rodham, said no way: She had to wear something new for her wedding.

They headed to Dillard’s. “I saw this dress and fell in love with it,” Mrs. Clinton said. “I felt acutely that it was meant to be. I couldn’t have done better if I’d been looking for a month. It fit my aesthetic and my sensibility. It was a kind of hippie Victorian, I loved the whole look of it, and I felt like the wedding gods were with me when I went shopping with my mom.”

Mrs. Clinton is not the only political figure or celebrity Ms. McClintock dressed for a special event. Another is Representative Jackie Speier, who serves California’s 14th District, in the Bay Area. Ms. McClintock designed a wedding dress for her. (Ms. Speier called her “the fashion designer for Democrats” because of her inclusive price points, though Ms. McClintock was a registered Republican.)

Vanna White, who has made a career out of elegantly flipping the letters on the game show “Wheel of Fortune” clad in satiny sheaths, did so for a time in Jessica McClintock gowns.

But Ms. McClintock’s bread and butter was also in gussying up young women for their proms and quinceañeras and even elementary school graduations, particularly in the heyday of the 70s, as they danced to Fleetwood Mac or Peter Frampton, their hair done in Dorothy Hamill-style bobs.

As the decades marched along, so did Ms. McClintock’s styles, from pale Victorians and Great Gatsby-esque satins in the 1970s to poofy silk taffeta in the ’80s to more streamlined dresses in iridescent silk in the ’90s and beyond.

In 1999, when her business, a private company, turned 30, sales were at $140 million, according to Women’s Wear Daily. She operated 26 stores around the country, marketed a fragrance, Jessica, and had licensing agreements for handbags, jewelry, china, eyeglasses, bedding and home furnishings.

Jessie Earl Gagnon was born on June 19, 1930, in Presque Isle, in northern Maine. Her father, Rene Arthur Gagnon, was a salesman; her mother, Verna (Roberts) Gagnon, was a beautician. They divorced when Jessie was 2. Her mother, before she became a hairdresser, baked cookies and played the piano in movie theaters to make ends meet. Jessie learned to sew from her maternal grandmother, who cared for her for a time.

She was attending Boston University when she met Alston Frank Staples, a student at the Massachusetts Institute of Technology. After they married, Mr. Staples found work near San Francisco developing a metal used in rocketry, and Jessie earned her degree in education at San Jose State University, taught in Cupertino and had a son, Scott, with Mr. Staples.

The boy was just 8 when Mr. Staples was killed in a traffic accident. She married his best friend, Fred McClintock, an Eastern Airlines pilot, and moved back East, but when the marriage failed she returned to California. Mr. McClintock had always called her Jessica, and the name stuck.

Ms. McClintock became the focus of a bitter labor dispute in the early 1990s. When a former contractor for her company went bankrupt and did not pay its seamstresses’ wages, labor activists declared her company morally liable for their work, organized a boycott of her brand and took out an ad in The New York Times with the headline “Let Them Eat Lace.”

The boycott lasted more than three years, and Ms. McClintock received death threats, said Ms. Santoro, her sister, who was the company’s director of sales. The boycott ended in 1996, when Ms. McClintock signed an agreement with Asian Immigrant Women Advocates, a community organization, to promote fair labor practices and establish an education fund for garment workers.

In addition to her sister, Ms. McClintock is survived by her son. Her longtime partner, Ben Golluber, who was chief financial officer of the company, died in 1998.

Ms. McClintock retired from the day to day management of her company in 2013, only to return a year later.

Since the early 1980s, the company headquarters were in a commercial building in San Francisco’s Potrero Hill neighborhood, but Ms. McClintock sold the space in about 2016 and thereafter ran the business from her home office.

She lived in a Queen Anne Victorian house in Pacific Heights, which she bought from the filmmaker Francis Ford Coppola. With a decorator’s help she turned it into a romantic fantasy, with Venetian chandeliers, billowing pink satin curtains, inlaid marble floors and Aubusson carpets — just the right backdrop for the Old World fashions she favored.

“I have a romantic feeling about life,” Ms. McClintock told a reporter in 2007. “I like Merchant-Ivory movies and candlelight and beautiful rooms. I like the patina of age.”