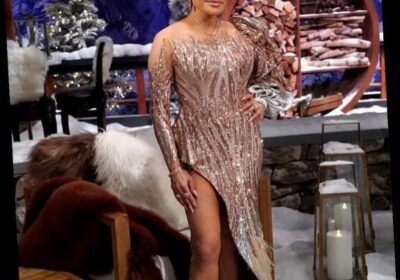 The Bravo star told Page Six all about her custom JXA by Koa Johnson gown that she wore for the reunion, part one of which aired Wednesday night. Shah, 46, said the "dramatic" dress had to be handed off to her before she boarded her flight because of last-minute alterations.

"Koa was running to the airport to hand me the gown when I was getting on the plane because there's little tweaks along the way," she told the outlet. "[With] a custom gown, there's hundreds and hundreds of hours … every little sequin, every little feather is sewn on, and it's very, very intensive."

Shah added that it "took a good three solid weeks with six, seven people working on the gown," which features "one big sleeve" and fits the cast theme provided by Bravo, according to Page Six.

"[Johnson] sketches it out and then our team sources the fabric and we start going from there and putting it all together," said Shah of the process. "We had to get the sketch approved. And, you know, when you're making a custom couture dress, you don't have the gown. So you have to show them a sketch, show them the fabric, show them the details so they can say yes, and then you can go and make it."