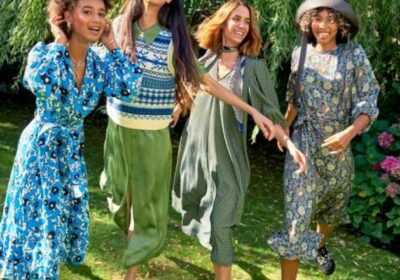 Written by Naomi May

It’s being touted as the greener way to enjoy great clothes, but what impact is the increasing ubiquity of fashion’s rental industry having on the pressure for us to keep up appearances?

Catherine Fulwood, a marketing consultant from London, signed up to use the ByRotation app, which bills itself as the world’s first social fashion rental app, in October 2019 just as it launched. Since joining nearly two years ago, Fulwood has made over £5,000 from renting her clothes, and in the month of June alone, she made £900 from just 12 rentals.

Fulwood, who describes herself as the most fashion-forward member of her friendship group, joined the app for a two-fold reason; firstly, to make renting “more mainstream for people” and secondly, to make a bit of extra money from pieces that were otherwise just hanging in her wardrobe.

The majority of Fulwood’s pieces on ByRotation, which has recently launched a physical pop-up at Westfield White City, are available to rent for a minimum of three days; perfect, she says, “to get it on a Friday and return it on a Monday, so you have it for the weekend.” Her most popular pieces are a trio of Instagram favourites: Rixo’s Gina dress, which is booked for the entire summer; a pink plissé Ganni dress; and Sleeper’s sell-out feather PJs.

“I always have a list of things that I really, really want,” she says. “So, you know, if it’s an investment piece or something then I’ll put my rental money towards it to buy. Seeing what’s popular helps you know what to buy next, because you see on Instagram that everybody’s loving something and you know you’ll make your money back. You do have to have new things quite regularly.”

Fashion’s booming rental sector was estimated to have a market value of £400 million in 2019 and has been touted by industry insiders as a possible solution to fashion’s environmental crisis. Among the most successful fashion rental companies are Hurr Collective, which has a long-standing partnership with Selfridges, and has reported an 850% year-on-year growth from the start of the pandemic and Onloan, whose revenue began tripling in February and has increased each month since.

Ganni and H&M were among the first brands to launch in-house rental services in 2019, while a clutch of public figures have commanded attention for championing rented fashion, most recently Carrie Symonds, who wore a handful of borrowed pieces from My Wardrobe HQ, a fashion rental company which has just launched a pop-up at Harrods, to the G7 summit earlier in the year. It’s been estimated that the fashion rental industry will reach £2.3 billion by 2029.

Leanne Evans is a London-based life coach who specialises in supporting women with low self-worth and low self-esteem. While she acknowledges the other factors which contribute to somebody suffering with a depleted sense of self-worth and self-esteem, Evans estimates that between 40-50% of her clients’ struggles stem from the comparison issues born of social media, where fast fashion companies – which rental brands are purported to be the tonic to – first galvanised colossal followings for their purse-friendly wares, before setting a precedent as to the power of virtual community in brand-building.

Content creator Yaourou, who has rented clothes from My Wardrobe HQ since 2019, notes that her favourite thing about renting is that it makes more financial sense for her to rent and return clothes, given that she feels “pressure” not to wear, or be pictured, in outfits more than once.

“Most of the time the pieces that I like are a lot of money, so renting makes sense for me economically – these fashion rental sites have so many designer pieces that I wouldn’t be able to pay full price for, let alone just to wear twice,” she notes. “And I actually never shop anymore now that I know I can rent so many nice pieces.”

Renting clothes can definitely work out to be more cost-effective and space-efficient than bulk-buying from fast fashion labels and, environmentally, it certainly makes more sense to increase the circularity of the industry, especially when 300,000 metric tonnes of textiles is binned in the UK every year. But where the intersections of fashion rental services and Instagram performativity collide is where the subject becomes slightly trickier.

“If you’re struggling with low self-esteem or self-worth and you’re scrolling through your feed and seeing all of these women wearing all of these fabulous outfits, then how could you not feel as though you need to also be doing that yourself?” Evans asks pointedly. “The fashion rental industry plays into the mindset of ‘I need to have something new’ or ‘I can’t be seen in something I’ve already worn’; it’s finding validation outside of yourself.”

The tag #OOTD (outfit of the day) has been tagged just shy of 400 million times on Instagram, with people from across the world using it as a way of showcasing their daily looks and, in some cases, garnering a following for themselves. It’s a form of keeping up appearances for the millennial age, which encourages virtual performativity. In a time where our social media feeds equate to social currency, being seen to be clad in the latest fashion is just as important as when the tag #OOTD first began floating around on social media in as early as 2014.

ByRotation, which was founded by former investment analyst Eshita Kabra-Davies and boasts over 80,000 users, features a line-up of fashion influencers, including Monikh Dale, Jessie Bush and Abisola Omole, who rent pieces from their personal wardrobes and promote them on social media. Hurr Collective uses a similar marketing technique, by using images of influencers in pieces that are available to rent through its platform with the Instagram caption of ‘Rent in bio now!’ It’s a savvy move from both brands, but you can’t help but feel as though somebody suffering from feelings of low self-esteem may scroll through these platform’s feeds – which look and function similarly to Instagram – and feel as though the solution to their woes could be to rent the wares of the influencer whose life – or virtual one, at least – they follow and/or venerate, whether consciously or not.

“Your identity is very tied up in how you present yourself to the world, and clothing is a huge part of that,” Evans notes. “Social media perpetuates the ‘shiny object syndrome’, which is basically a ‘lacking’ mentality, of feeling like you always need something new or different or outside of yourself.”

Kabra-Davies, though, is clear on ByRotation’s impetus, which is to empower its users. The app, she says, is for ‘budget conscious’ fashion lovers; those who want to partake in trends without the footprint on the planet, or indeed their bank balances. “People want to belong, and sometimes belonging means dressing in a way which they might not be able to afford to but I’m glad we can help them with their self-esteem, even if it relates to material possessions,” she says.

“There are some users who have used the app to try and make themselves appear wealthier or more affluent than they actually are to match up with a particular lifestyle,” she adds. “But predominantly, there’s a huge sense of belonging on ByRotation, which is down to the community we’ve built.”

The term ‘enclothed cognition’ was coined by researchers from Northwestern University, Hajo Adam and Adam D. Galinsky, in their experiment from 2012, during which they endeavoured to discover the ways in which clothing influences a person’s psychological state and performance levels. The study essentially deciphered that wearing clothes that we feel speak best to who we are not only increases our psychological state, but also enhances our performance in tasks.

Applying the theory of enclothed cognition, could fashion rental therefore provide a framework through which renters could actually increase their psychological states?

Further research from 2020, which found that one in five women who use Instagram feel that social media platforms cause them to feel pressured about their appearance, suggests not. “There is definitely a keeping up with the Joneses that happens with renting clothes,” admits Amy, a 25-year-old researcher who uses My Wardrobe HQ. “But everybody knows that when you look good, you feel good. So, what’s the harm? Rent a cute dress, get lots of compliments on it, and it’ll make you feel amazing!”

Evans isn’t so sure. “The problem with social media, and the way it makes people feel about themselves, is it’s an addiction. You get that dopamine hit when you get your likes, you get interactions with people on it; it’s seeking something else which, in turn, has an impact on people’s long-term mental health.”

Fashion favourite The Attico, which is available to rent from My Wardrobe HQ’s pop-up at Harrods.

ByRotations’ social network, argues Kabra-Davies, is actually its biggest asset. “Other rental companies function more as e-commerce websites that are all about luxury and editorial and all of that stuff, but we position ourselves as more in line with Depop or Vestiaire because they see social shopping to be the next big thing, creating a marketplace that’s very social,” she notes.

But for those who may struggle with low self-esteem or self-worth, whether consciously or unconsciously, the communities fostered by fashion rental companies – as a renter and lender, there are opportunities on almost all of the services to be featured in a clutch of editorial opportunities – it may be harder than normal to remove yourself from it.

“It almost makes an influencer of the person wearing the rented clothes, which then cultivates the same complex issues that influencers on every other social media platform face,” Evans notes. “To feel connected to a community is important for building people’s self-worth, so it would be difficult for users to remove themselves from wanting to feel validated by others’ approval.”

For Fulwood, who admits that she “always does a bit of stalking” before renting her pieces, and Kabra-Davies, however, it’s precisely the concept of community that they feel sets ByRotation apart.She lives in central London and, on the day that we speak, had a renter come to her house to pick up a Rejina Pyo dress that she was borrowing.

“You rate people after they’ve borrowed something, which users on the app can see, so nobody wants a bad review and most people have their Instagram accounts linked to their profiles,” explains Fulwood, who admits that she “always does a bit of stalking” before renting her pieces. “I’ll have a little look and decide whether they look nice or fun and if you get a strange vibe, you can reject them.”

It’s possible for both the virtues and the vices to co-exist symbiotically in any business and there’s no doubt that renting, rather than buying clothes, certainly provides the framework to one of many solutions to fashion’s complex issue with mass consumption. But, as with Instagram and social media in general, it’s important to remember that not everything is always as it seems.