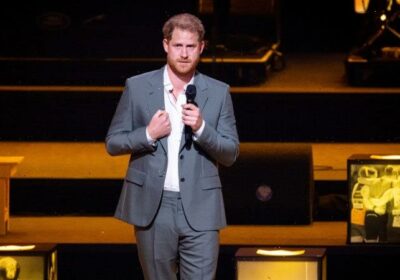 Until his Montecito makeover, Prince Harry had always been Mr Relatable Royal. He was the cheeky lad with a mop of unruly ginger hair and a twinkle in his eye. While his brother, Prince William, was by necessity the sombre, magisterial one, Harry could get away with naked Vegas hijinks and ruckuses with photographers as the nation rolled its eyes fondly like an indulgent mum. 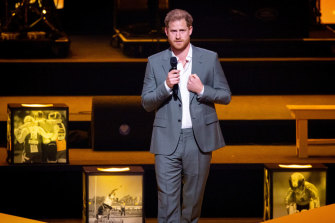 This approach also parlayed into how he dressed: a low-key, laid back, Everyman approach. Even his favourite suit was decidedly democratic, a pale grey number from American retailer J Crew, priced at a reasonable £300 ($A528). But his much publicised shift away from the royal family and attendant move to California has seen a marked change in his approach. It seems the prodigal prince is finally finding his fashion feet. Everyman no more, this is the rise of High Net Worth Harry. 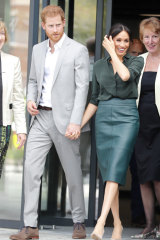 Harry appearing in his favourite J Crew suit back in 2018.Credit:Getty

The prince, alongside Meghan Markle, has been in the spotlight thanks to his promotion of the Invictus Games, plus an explosive NBC interview in which he claimed he was protecting the Queen.

Away from the headlines, the Duke of Suffolk has clearly been taking some style cues from his wife, whose wardrobe costs have been the subject of much debate. Now that he’s in the glossy environs of Santa Barbera, just like Meghan’s, Harry’s wardrobe has become decidedly more luxe.

The first indication was his Celine suit, a sleek grey affair which he wore to accompany his wife’s jacket by the same brand. Celine is the hottest fashion ticket around, designed by the messianic Hedi Slimane, who seems to have bottled the nebulous concept of “cool” and repackaged it at the storied French house. Harry’s Celine suit is likely bespoke, but off-the-peg suits from the brand are in the four figure bracket. Those Netflix dollars are clearly rolling in. 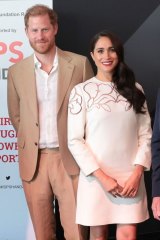 Harry wears a camel suit from Briony, a brand renowned for its luxe Italian tailoring.Credit:Getty

The fashion house’s cut is famously unforgiving, usually reserved for skinny Left Bank youths rather than normal-sized British blokes, so if anything else, it’s refreshing to see a shift in this regard. The sleek slate colour is also grown-up and sophisticated, as though Harry is demonstrating that he’s no longer the court jester.

His decision to opt for a caramel-toned Brioni suit jacket is also telling. This is the highest echelon of luxury tailoring, which the Duke of Sussex chose as a handsome ensemble to wear to the Invictus Games. Whoever is advising the royal, or his wife, they clearly know their stealth wealth luxury brands: for decades, Brioni has been the go-to for the world’s best dressed men.

Starting out in post-war Rome, the brand became a byword for Cinecitta glamour thanks to dressing Cary Grant and Clark Gable. Since then, it’s become a peerless example of Italian tailoring finery, training tailors in rural Abruzzo for years to perfect the craft of a handmade suit. Harry’s in very good hands.

All of which points to the prince switching up his look now that he’s manoeuvring in certain elite circles. Nothing indicates you’re in-the-know about the finer things in life than a custom-made Brioni suit. The Duchess of Sussex has long been well-versed in high-end luxury fashion, but this is the first time that Harry has dipped his desert boot-clad toes in the water.

Perhaps we’ll see a makeover of his rather ramshackle approach to grooming in the coming months, too: the royal has always remained rather charmingly unkempt with regards to his wiry shock of hair and bushy beard, but a debonair new approach to dressing calls for a new, more considered approach to personal maintenance, too.

With the international men’s fashion shows kicking off in June, perhaps we can expect a certain regal posterior pride of place in the front row.