Home » Fashion » In Harmony for 14 Years

In Harmony for 14 Years 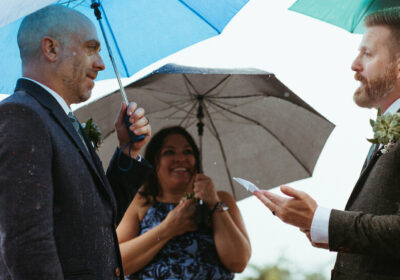 Christopher Michael Repotski and Michael Sean McClenney have been traveling to Provincetown, Mass., for Labor Day every year since 2016. So, it made perfect sense for their wedding to be there, too, with tea dances and parasols included.

The couple, who now reside in Atlanta, met while in the Atlanta Gay Men’s Chorus. Mr. Repotski, 45, a project manager for the digital learning services company LEO Learning, joined the chorus in the fall of 2007, “wanting to get back to my first love, performing,” he said.

He made a big impression on Dr. McClenney, 46, the deputy chief of rehabilitation and chief of audiology and speech pathology at Atlanta VA Medical Center. “I remember meeting Christopher at one of his first rehearsals and wanting to know more about this smiling guy with the bright blue eyes,” said Dr. McClenney, who goes by the name Sean and received a doctorate in audiology from the University of Florida. “A few months later, we had our first date and I have not wanted to be without him in my life since.”

In 2017, the couple took a trip to San Francisco and the Napa Valley. After dinner at the Napa Valley restaurant Terra, which has since closed, Dr. McClenney walked Mr. Repotski up to the main street, deserted and aglow with streetlamps. When Mr. Repotski heard the sounds of their song, “Only Us” from the musical “Dear Evan Hansen,” he turned around to find Dr. McClenney down on one knee with the tune playing from his phone.

On their annual trip to Provincetown, Ma., in September 2019, the couple decided to get married there the following year. But by the end of March 2020, they realized the pandemic would make that nearly impossible.

They moved their plans forward a year, and, on Sep. 9 at 3 p.m. at the Pilgrim Monument, they were wed. They applied for and received their marriage license in Provincetown earlier that week so that their “names would be forever in the town records,” said Mr. Repotski, who is originally from Wilkes-Barre, Pa., while Dr. McClenney is from Knoxville, Tenn.

The weather was gorgeous from the moment they arrived — that is, until their actual wedding day. Chairs were set up in the drizzle for the parents of the grooms, and the rest of the 44 guests simply stood in the rain with umbrellas.

Their friend and officiant, Sarah Draplin, began the ceremony by saying, “Welcome, everyone. Thank you for joining us on this perfectly imperfect day, overlooking Sean and Christopher’s most favorite place in the world.” Ms. Draplin was ordained by American Marriage Ministries and obtained the one-day marriage designation as required by Massachusetts.

After a rain-shortened ceremony, guests headed to the Boatslip Resort and Beach Club for the tea dance, a happy hour tradition in the L.G.B.T.Q.+ community that almost always includes dancing. A reception beneath a covered patio followed at the restaurant Strangers & Saints.

Antony Barone Kolenc Jr., a friend of the couple who now lives in Amsterdam, sang “How Long Will I Love You?” at the reception. Although the song had been planned for the ceremony, it turned into an otherwise unplanned first dance for the grooms.

The next day, the couple headed back to Boatslip for another afternoon tea dance, with guests attired in caftans and carrying parasols. “We had paper parasols for the wedding because of the sun, but didn’t use them because of the rain,” Mr. Repotski said. “So, of course, we brought them to the tea dance.”