How Indian Americans Came to Love the Spelling Bee 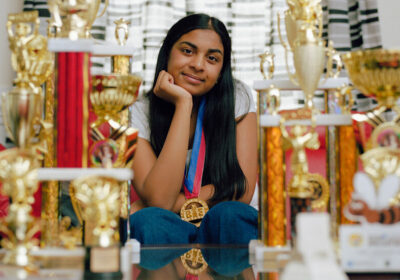 Eighth graders aren’t generally known as dictionary aficionados. But Dhroov Bharatia, 12, has a passion for language.

“Nothing can express an idea as effectively as a judicious use of words,” he said by phone from his home in Plano, Texas. This love of vocabulary has made him one of 11 finalists in this year’s Scripps National Spelling Bee, adding him to a long line of South Asian American middle and elementary schoolers who have excelled at the competition.

Over the past two decades, spelling bees tailored to South Asian children have proliferated. So have spelling bee coaching companies founded by South Asian Americans. Flyers for local bees are handed out at Indian supermarkets, and the activity is spread through word of mouth at temple events.

“It is definitely a source of pride from an educational standpoint,” said Shalini Shankar, an anthropologist and the author of “Beeline: What Spelling Bees Reveal about Generation Z’s New Path to Success.”

But it is also something more: The bee has become an occasion for unity within the South Asian American immigrant community, and it all goes back to a historic victory more than three decades ago.

In 1985, Balu Natarajan became the first child of immigrants to win Scripps, prompting an outpouring of support from people of South Asian descent. “Many people who I’d never even met felt a connection to it,” said Mr. Natarajan, 49. “I had no idea how much one could be embraced by a community.” 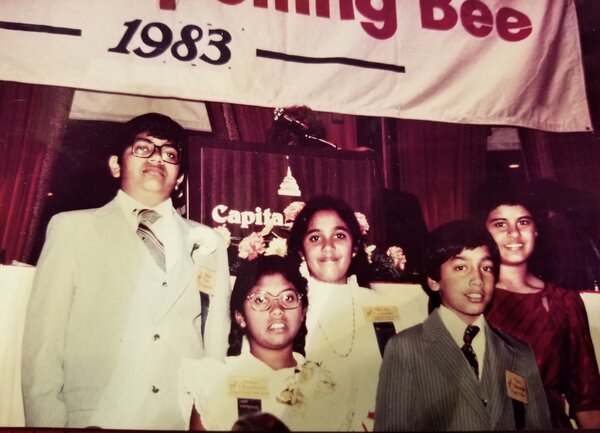 He became a well-known name in Indian American households around the country, which he described as humbling. “People in our community really do pay attention when one of our own is able to have success in something,” he said.

“Today, we have children and families in our community that are center stage when they go to the Scripps Spelling Bee. It’s really a place of comfort. But back in the ’80s, we were just exploring it,” Mr. Natarajan said. “We really had no idea that we were doing this for a community. We were just this tiny fraction of the participants.”

Mr. Natarajan has the photos to prove it: When he first competed in the Scripps spelling bee in 1983, he remembers only six contestants of Indian descent out of 137 students. A few of them gathered to take a photograph, documenting a small moment of togetherness — a stark contrast to the playing field of today.

The Bee Is Back

Every year, about 11 million children in the United States participate in school-level spelling bees. The first Scripps National Bee was held in 1925; because of the pandemic, it was canceled last year for the first time since World War II.

The words have gotten progressively more difficult over the decades — mostly because the kids have gotten a lot better. “Therapy” was a winning word in 1940, but in 2019, two of the winning words were “bougainvillea” and “erysipelas.”

In 2019, Scripps named eight winners for the cup — “octochamps,” they coined themselves. Previously, only two kids had ever tied for the win. Seven of the 2019 champions were of Indian descent.

That doesn’t mean she’s not in it to win it. Ashrita, 14, is spending about 10 hours a day practicing, and has three coaches to help her prepare. But part of her love for the bee has to do with the incredible support she receives from her community.

“I live in Ashburn, Virginia, and let me tell you, a lot of people here are of South Asian descent,” she said. “So many people — all my friends, my neighborhood, my community — they’ve all been super supportive. We’ve had parties, they even filmed a congratulations video for me, baked me cakes.”

Indian Americans are one of the younger, newer groups of immigrants in the United States. Over 60 percent of Indian immigrants living in the United States today arrived after 2000. “That’s not the case for most other Asian populations, Chinese, Filipino, Korean,” said Sangay Mishra, an associate professor at Drew University and the author of “Desis Divided: The Political Lives of South Asian Americans.”

. Indian immigrants did come to the United States in earlier waves, particularly in the wake of the 1965 Immigration and Nationality Act and the family-based immigration that followed. But the implementation of the H-1B visa program in 1990, which allowed for the entry of specialized foreign workers, brought in Indian immigrants in much larger numbers.

In 2016 and 2017, Indians accounted for almost 75 percent of all H-1B visa holders in the United States. This “changed the character of the community, in terms of skewing it more professional and more highly educated,” Dr. Mishra said.

Parents were looking for hobbies for their children that prioritized “all kinds of educational attainment,” said Dr. Shankar. Spelling as an extracurricular activity soon began to spread by word of mouth. “They tell their broader ethnic community about it, and they bring each other to these South Asian spelling games, which are really accessible and held in areas where there’s a large concentration of South Asian Americans,” she said.

The hobby is also passed down — within families — to younger siblings and cousins. (“If the older sibling did it, the younger one often follows,” said Dr. Shankar.) That was the case for the 2016 Scripps champion, Nihar Janga, 16, whose passion for spelling was born out of a sibling rivalry going back to age 5. Watching his mother quiz his older sister, Navya, as she was preparing for the bee, Nihar started chiming in, reciting spellings even before Navya could finish.

“I looked up to the fact that my sister was participating in something like this, but I also wanted to be better at it. Eventually, it grew into my own love for spelling and everything it’s taught me,” Nihar said.

An Engine for Success

Navya and Nihar’s family, who live in Austin, Texas, first came across spelling bees through Navya’s bharatanatyam (an Indian classical dance) teacher, who was involved with the nonprofit North South Foundation.

The foundation has over 90 chapters, hosts regional and national educational contests in a variety of subject areas, and raises money through these events for disadvantaged students in India. A spelling bee is among the contests run by the organization, and it’s common for top contenders to continue on to Scripps.

Mr. Natarajan is now the foundation’s president, and it has become a powerhouse incubator. Five of 2019’s Scripps octochamps were involved in the North South Foundation.

Another prominent spelling bee on the practice circuit is the South Asian Spelling Bee, which is run by the marketing agency Touchdown Media and has been sponsored by companies such as MetLife and State Farm.

“At its height, it was really pumping in a lot of capital into holding these bees,” Dr. Shankar said. “They’d have a title sponsor and numerous smaller sponsors.” This gave spelling bees a lot more traction and momentum, she added: “It has an entire engine behind it.”

“The community created an infrastructure for the kids to really thrive and excel in this area,” she said.

More Than a Memory Game

For many students, spelling isn’t just a study, but also an all-encompassing way to learn about the world.

“Spelling is not just taking these 500,000 words in the English language and memorizing them and then you win the spelling bee — that’s not how it works,” Nihar said. “I want people to think of spelling just like any other competition, like wanting to learn the story behind that field and learning how that field can apply to the world.”

“You can’t just eat protein powder and then go be good at football,” he added.

Dhroov said that one of his favorite things about spelling is how it intersects with his other passions, including music. “I worked on the ‘Carnival of Venice’ song on my alto saxophone, and that’s a piece where the dynamics are very important,” he said. “Knowing all these words — for example, ‘crescendo,’ ‘diminuendo,’ ‘ritardando,’ which means to slow down, ‘fortissimo,’ which means play extremely loud” allowed him to “bring emotion to the piece, make it come alive,” he said.

The amount of concentration necessary also inevitably leads to significant time commitments, and plenty of pressure on the kids.

“The level of our competitors has definitely increased. Some of our students prepare for the spelling bee as any other collegiate athlete would with the amount of preparation, the dedication, and the amount of time that they study,” said J. Michael Durnil, the bee’s executive director.

Tarini Nandakumar was, at 10, one of the youngest semifinalists competing this year. Before she struck out in the semifinals, on June 27, she said she wanted to finish what her older brother, Pranav, had started years before. “My brother got 19th place in nationals, so I wanted to continue and try and win,” Tarini said. Of how it felt to have made it that far, “it’s exciting, but also scary,” she said.

The pressure was high. And when Tarini, who is from Round Rock, Texas, didn’t make it to the finals, she felt a lot of disappointment. Many tears were shed at first, she said. Her parents tried to comfort her, and within just a few days, she said she came around, and was asking for help to start studying again.

“I’m very motivated to get better next time,” she said. “Or at least get in the top five.”