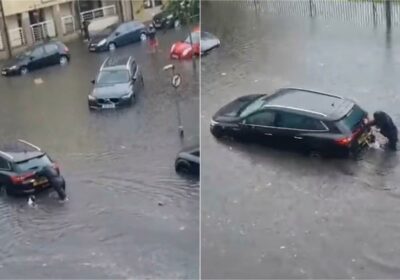 THIS is the moment a woman and her DOG pushed a stranded car through a floodedstreet.

The clip, posted by Lori Gillies, shows her helping a punter in distress after they got their motor submerged in water after Glasgow's torrential downpours. 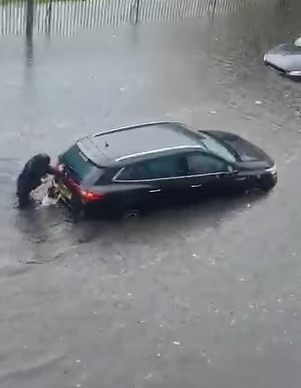 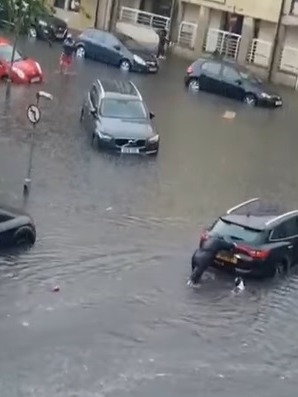 The water was waist-high on her as she did her good deed, while her dog Puck swam around her.

And, remarkably, when she starts pushing the car the helpful pooch joins in and helps get the car unstuck.

The whole thing is narrated by hilarious commentary from the man filming.

At first, as Lori struggles to get the vehicle moving, he says: "You've actually got the dug (sic) swimming now, and she's trying to give it a push.

"She's asking 'is the handbrake off?' Handbrake's off and now she's going to push.

"What is this? Think it's a Volkswagen Estate."

Lori and Puck make their way back round to the rear of the car to get pushing again, and this time make some progress.

"Oh the dog's pushing it anaw (sic) now. Brilliant. There you go. Wee dug giving it a pish.

"What a dug man. Look at that.

They manage to move it a significant distance along the road before he adds: "Oh, dug's knackered. Having a wee break."

After being sent the footage of she and her pooch's moment in the limelight, Lori wrote on Facebook: "It’s the commentary for me. Just doing a good deed helping this car and it’s owners get to drier land.

"Puck really is the best dog in the whole wide world."

Courtney Monaghan added: "The doggo. What a champ."

In more news this woman was left humiliated after being told by airline crew to cover up because of her 'inappropriate' outfit.

And meet the woman who was chuffed about selling her iPhone on Facebook for £230, then realised they paid her with fake notes, warns of her mistake.

Meanwhile this lady found out her best friend cheated with her boyfriend.