Granny Panties of Yore Reinvented for a New Customer 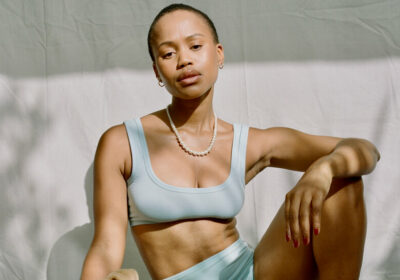 In September 2019, Lydia Okello, a content creator who works primarily with slow fashion brands, received an email from a small underwear company offering to send a package of its products, with no pressure to post about them. Mx. Okello agreed, and within two weeks, a recyclable package containing a soft lilac bralette and a matching pair of vertiginously high-waisted panties arrived at their doorstep in Vancouver, British Columbia.

“I was surprised underwear could be that comfortable right away,” said Mx. Okello, who was so sold on the underwear that they have since acquired eight more pairs, paid for completely out of pocket.

The brand, ARQ, in McMinnville, Ore., sells just one style of nether garments: a borderline parody of granny panties with a rise so steep it inches past the belly button. (The company also offers three styles of bralette, a tank top and a bodysuit in an array of cheerful colors.)

At $28 per pair, the panties are not exactly budget-friendly. Yet despite the unfashionable silhouette and purple price, ARQ has managed to collect a cult following that pledges utter fealty to the exaggerated intimates based on their formidable coverage, comfort and counterintuitive sex appeal.

“I have never felt better in a pair of underwear in my life,” said Miriam Salamah, a workplace specialist in Los Angeles. Ms. Salamah discovered the label two years ago after creeping the Instagram profile of an ex-fling’s new girlfriend and admired a mustard yellow and red checkered set she had posted — until she learned the price.

“They want $28 for a pair of underwear?” she said, using an expletive. “I cannot afford this.”

It wasn’t until early 2021 that Ms. Salamah felt financially comfortable enough to buy a pair and has since acquired two more. “It’s amazing to take a pair of 3XL underwear out of the package and breathe a sigh of relief knowing it’s going to fit me,” she said.

Kate Resler, a digital content strategist in Albany, N.Y., acquired her first pair of ARQ panties at the beginning of the pandemic and has since become a fervent collector. “Every pay period I’ll buy another couple pairs,” she said.

For Ms. Resler, the hyperbolic panties are more than worth the price. “They don’t tend to ride up or down, they don’t stretch out during the day and they cover my whole butt,” she said. “I still wear my high-waisted Hanes, but they’re much more restrictive.”

Like some skivvies-based “Sisterhood of the Traveling Pants,” ARQ has managed to achieve the truly miraculous: a single style of underwear that both conforms to and flatters every body shape.

“Most of the handful of people I was working with on production in L.A. told me they were ridiculous,” said Abigail Quist, the ARQ founder. “I was like, ‘No, these look and feel amazing, trust me.’”

A former ballet teacher, Ms. Quist founded the company in 2016. Initially she sold children’s clothing but pivoted to adult undergarments in 2018. The underwear’s uncanny fit was not achieved through rigorous testing. Rather, Ms. Quist sewed a pair for herself and loved them so much she decided to produce more.

She attributes ARQ’s comfort and fit to its bound-edge seams, an uncommon finish in underwear. Instead of elastic, the edges are fabric that is folded over and sewn through to create a hem.

Since 2018, growth has been swift. In 2020, ARQ did $7.5 million in gross sales, compared to $1 million in 2019, Ms. Quist said. No doubt the pandemic, in which people abandoned their regular clothing in favor of cozy tie-dye sweatsuits and nap dresses, played a role.

“This silhouette ties into the current day messaging of wearing things for you,” said Cora Harrington, the founder and editor of The Lingerie Addict. “I would very much file ARQ under the umbrella of this anti-Victoria’s Secret, anti-erotic aesthetic that focuses on women being themselves.”

Remarkably, ARQ’s growth seems to be driven largely through word of mouth with a sprinkle of strategic product seeding among slow fashion influencers mixed in. An online whisper network has formed in which women counsel one another on the properties of the panties.

“I’ve had friends come to me asking: ‘I’ve noticed you have ARQ. Do you like them? Are they worth the money?’” Mx. Okello said.

Often times these casual conversations lead to a purchase. And then another. “Our return customer rate is bonkers,” said Ms. Quist, who added that more than 48 percent of customers end up making a second purchase.

The princely price is based on the weight of the cotton spandex fabric, which Ms. Quist said is twice as thick as the average pair of Fruit of the Looms. The cotton is organic, and the company works with a factory in Los Angeles that pays workers $14.25 an hour. Wages at ARQ’s shipping and fulfillment warehouse begin at $15 an hour, and the company covers health care for all employees.

Beyond its immediate disciples, ARQ is said to pick up positive reviews from a less obvious demographic. “If I had somebody I was hooking up with over and put on a pair of ARQ, even guys would compliment them,” said Mary Niamh McGettigan, a student in Halifax, Nova Scotia.

Ms. Quist insists that there’s nothing enchanted about her underwear — “We can’t make magic garments that morph to fit every body” — but the evidence suggests otherwise.

“All of my adulthood I’ve been trying to find a pair of standby underwear I know will be comfy and just fit,” Mx Okello said. “I had not ever found that until I found these.”