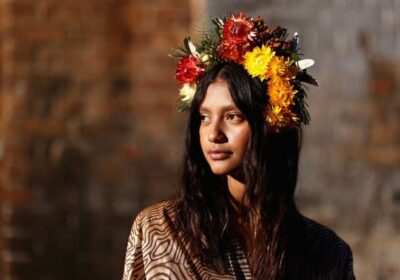 SYDNEY — Kicking off with a 60,000-year-old smoking ceremony and catapulting a flurry of new names, a number of them Indigenous, the newly minted Afterpay Australian Fashion Week returned to Sydney this month after a two-year hiatus with a new, inclusive spirit and a packed live runway schedule.

On the opening day, there was a palpable sense of relief among attendees to be back networking with their peers after 18 months of Zoom chats and off-again-on-again lockdowns. The industry mood was also buoyed by the results of an Ernst & Young report that were released that morning by the Australian Fashion Council, which revealed the Australian fashion industry contributes more than 27.2 billion Australian dollars, or $21 billion, to the Australian economy and creates 7.2 billion Australian dollars, or $6 billion, in exports — more than double the export revenues of Australia’s wool, wine and beer sectors, respectively.

Ninety-seven Australian and New Zealand brands were featured throughout the five-day resort 2022 collections showcase, the event’s delayed 25th anniversary, which wrapped on June 4 at the Carriageworks venue. The majority of the 48 presentations were live runway shows, complemented by a handful of fashion films and a substantially boosted talks program.

Event organizer IMG could not, at press time, supply any attendance data. However, with no international delegates due to Australia’s ongoing travel bans, numbers seemed down on 2019, which was attended by some 1,600 industry professionals from more than 20 countries. The 2020 event was canceled altogether due to the pandemic.

The new, integrated consumer program “The Experience” saw one dedicated see now, buy now consumer show included on the schedule on each of the five days, presented by new naming rights sponsor Afterpay. All of the shows sold out, according to IMG, seating anywhere from 400 to 600 people per show, pending the layout. Two brands — Romance Was Born and Bassike — doubled down on shows, each presenting a trade show and a public one.

Nine of the trade-focused wholesale collections shows also opened up a small number of seats to the public.

Beyond mandatory temperature checks and NSW Government QR code check-ins at entry to Carriageworks, only pit photographers and backstage crews had to mask up and there was no social distancing in the seating plans.

“The AAFW resort 2022 collections showcase reminded us of moments taken for granted pre-pandemic, including the magical spectacle of a live runway and seeing the creativity of fashion and retail come to life,” said Bridget Veals, general manager of women’s wear, footwear and accessories at Australian department store chain David Jones.

“There were so many standout shows including Ginger & Smart, Kitx, Oroton, Commas and Anna Quan,” she added. “Bondi Born’s runway amongst the most quintessential Sydney backdrops [the Overseas Passenger Terminal, overlooking Sydney Harbour] was a real highlight. Showcasing their full resort collection, which consisted of effortless halter maxis, matching separates and chic trousers, all in an inspiring color palette of punchy sorbet tones. I loved how seamlessly they merged resort and ready-to-wear.”

“There seems to be a united feeling that every attendee is extremely grateful and happy to be out and about interacting, catching up and connecting, whilst enjoying the creativity, exhibitions and buzz of the busy scheduling,” said Eva Galambos, director of Sydney multibrand luxury boutique Parlour X, whose favorite shows included Romance Was Born, which presented a collection composed of deadstock and upcycled vintage fabrics against a fantasy fairground backdrop; Christopher Esber; Albus Lumen; Bassike; as well as a heavy roster of newcomers who joined the schedule this year.

The first of the Indigenous shows, staged by FNFD, featured an all-Indigenous cast and crew. Political messages about Indigenous land rights resonated through powerful musical performances from the artists William Barton, rapper Neil Morris and electronic duo Electric Fields. The show drew a standing ovation which lasted for minutes and left many attendees in tears.

“Seeing our Indigenous designers being part of fashion week was incredible,” said Anna Brennan, general manager of fashion at Global Fashion Group’s The Iconic, Australasia’s largest online fashion retailer, which is planning to introduce Indigenous brands to its lineup.

“We’re really excited to add these brands to our assortment, two in particular — Grace Lillian Lee and Ngarru Miimi,” Brennan added. “But there’s a list of quite a few that we are in the midst of following up. We see them sitting with our designer section. Definitely, they would be as part of our elevated assortment.”

Gender-fluid dressing was another key highlight of the week, said Brennan — along with a noticeable proliferation of nonbinary models on AAFW’s runways.

Other key overall trends included a return to better dressing, as seen in a number of collections through reimagined, soft tailoring; matching sets; crochet; resort-appropriate leather; a fresh, bright color palette including hot pink, mango, forest green and pops of neon, and headscarves in several collections.

Although specializing in what she calls “wow dressing” and party pieces, the pandemic wasn’t all bad for Shannon Thomas of Sydney boutique Désordre, who has opened two new stores since September, due in part to more flexible post-COVID-19 business terms, as well as her business blowing up on Instagram throughout the pandemic via locked-down consumers eager for escapism, she said. Christopher Esber, who specializes in intricate eveningwear that’s heavy on embellishment and cutouts, has been Désordre’s number-one brand for the past three years.

A number of international retailers that have for years sent buyers down to attend the event in person, facilitated by the event’s sponsored travel and accommodation program, registered with IMG as “digital delegates” this year and caught the runway action via IMG’s global streaming platform Ausfw.com, following up with appointments in virtual showrooms.

The latter included Australian start-up Ordre.com, which showcased the collections of 25 participating designers via its ongoing partnership with the Australian Fashion Council. Collections in the AFC Virtual on Ordre showrooms, which will be open until the end of June, had at press time been viewed 431 times by 52 unique buyers in 12 countries, Ordre told WWD.

“All designers really elevated their collections, taking them to the next level of resortwear, through unique methods and aesthetics. Bondi Born and Bassike, in particular, presented a modern lifestyle approach this season,” she added.

“Loungewear to luxe is quite prominent this fashion week — from silk separates that felt modern, yet subtle enough for lounging or dressing up. Additionally, sunset silky shades are also a must covet item this season,” Cranfield said.

“I thought Bondi Born was beautifully presented — it really transported me remotely to Sydney, with the incredible views of Sydney Harbour and the iconic Harbour Bridge in the background,” said Tenser, who reports Browns is continuing to see strong growth across the business post-COVID-19. “The collection had a strong focus on ready-to-wear, continuing to develop from the swim, and this evolution really made sense to be present in a city location.”

Perth-based Showroom-X, a new Australian e-commerce platform, which targets the mainland Chinese market, came up with its own twist on AAFW’s new see now, buy now component by working with Non Plus to make its presentation a shoppable trunk show.

With delivery in October, Showroom-X is taking a 30 percent deposit on Non Plus runway looks — which are presented on the Showroom-X website photographed on a woman.

“If you go to Icebergs [the restaurant] right now, there’s a QR code on the back of the menu and at the show, there was a QR code at the front and that took you straight to our site where you could pr-order straight from the runway,” said Showroom-X creative director Kelly Atkinson. “It’s see now, buy now but in a considered way, that’s preordered off wholesale. I think that’s kind of the future of fashion weeks — it has to be kind of that consumer-driven mentality. This was a way of marrying the two for us. So OK, we can have the wholesale clients there, but we can also get a real-time customer feedback. Because it’s so different from a buyer’s perspective.”

She added, “I think that that data is invaluable in this day and age. It means that we’re producing less and considering the products that we are making already sold.”