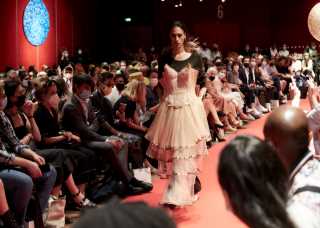 PARIS — The Renaissance project is all about second chances.

The French nonprofit organization provides training for job seekers through a workshop that repurposes designer clothes to give them a second life — an approach that is garnering attention from major industry players including Maison Alaïa, which is partnering with Renaissance on a capsule collection of upcycled clothes.

On Monday night, the association held its second annual runway show to spotlight the work of this year’s participants, who hope to find employment with fashion houses after a first edition in 2020 that took place just before the outbreak of the coronavirus pandemic, hampering prospects for its graduates.

Models walked at Paris auction house Drouot in outfits that celebrated the notion of gender equality, in a bid to show that upcycling is a unisex affair.

The approach has won over Marylin Fitoussi, who designs the costumes for the Netflix series “Emily in Paris” alongside consultant Patricia Field. For season two, which filmed in Paris this summer, she dressed Philippine Leroy-Beaulieu, aka marketing executive Sylvie Grateau, in a chain-embroidered cream dress and jacket from the workshop.

amfAR Cannes 2021: Inside the Gala 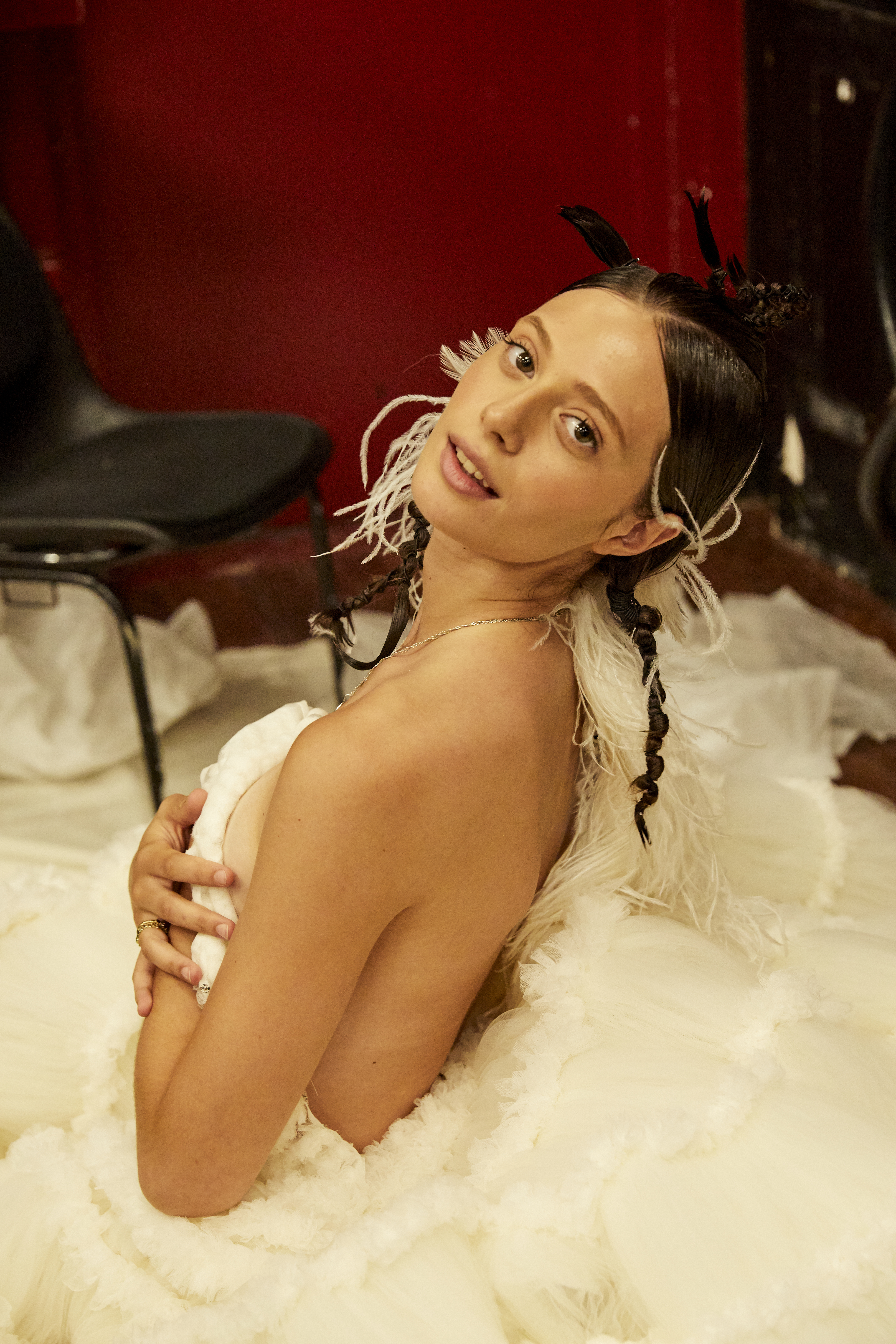 Backstage at the Renaissance fashion show in Paris. Laurence Laborie/Courtesy of Renaissance

It’s testimony to the high standards of the project, which is the brainchild of Philippe Guilet, who spent almost a decade working as director of research alongside Jean Paul Gaultier, in addition to stints at Thierry Mugler, Karl Lagerfeld and Joseph.

After several years in the cultural sector, including as artistic director of the French Embassy in Romania, he founded Renaissance in 2019.

Based in a low-income housing estate in the south of Paris, the workshop welcomed 17 trainees this year for a six-month program aimed at familiarizing them with the techniques and jargon of haute couture, the top end of the fashion pyramid that relies on highly qualified workers to produce made-to-measure clothes.

Participants, who all earn a salary during their training period, come from as far afield as Chechnya, Algeria, Morocco, Ukraine, Turkey, Guinea, Russia, Moldova, France, Ivory Coast, Afghanistan and Brazil, and include experienced tailors and absolute beginners.

“The aim is to help them return to the job market by giving them confidence through training and allowing their talent to shine through, so that they can apply to couture workshops,” Guilet said on a sweltering afternoon, as his students quietly toiled around work tables with a radio playing in the background.

“Many of them arrived in France with sewing techniques, but no method. Obviously, it’s quite bewildering, so here we teach them the way things are done,” he added. “We speak the vocabulary of the houses, so that if they join a brand, they immediately understand the language and the hierarchy of the atelier.” 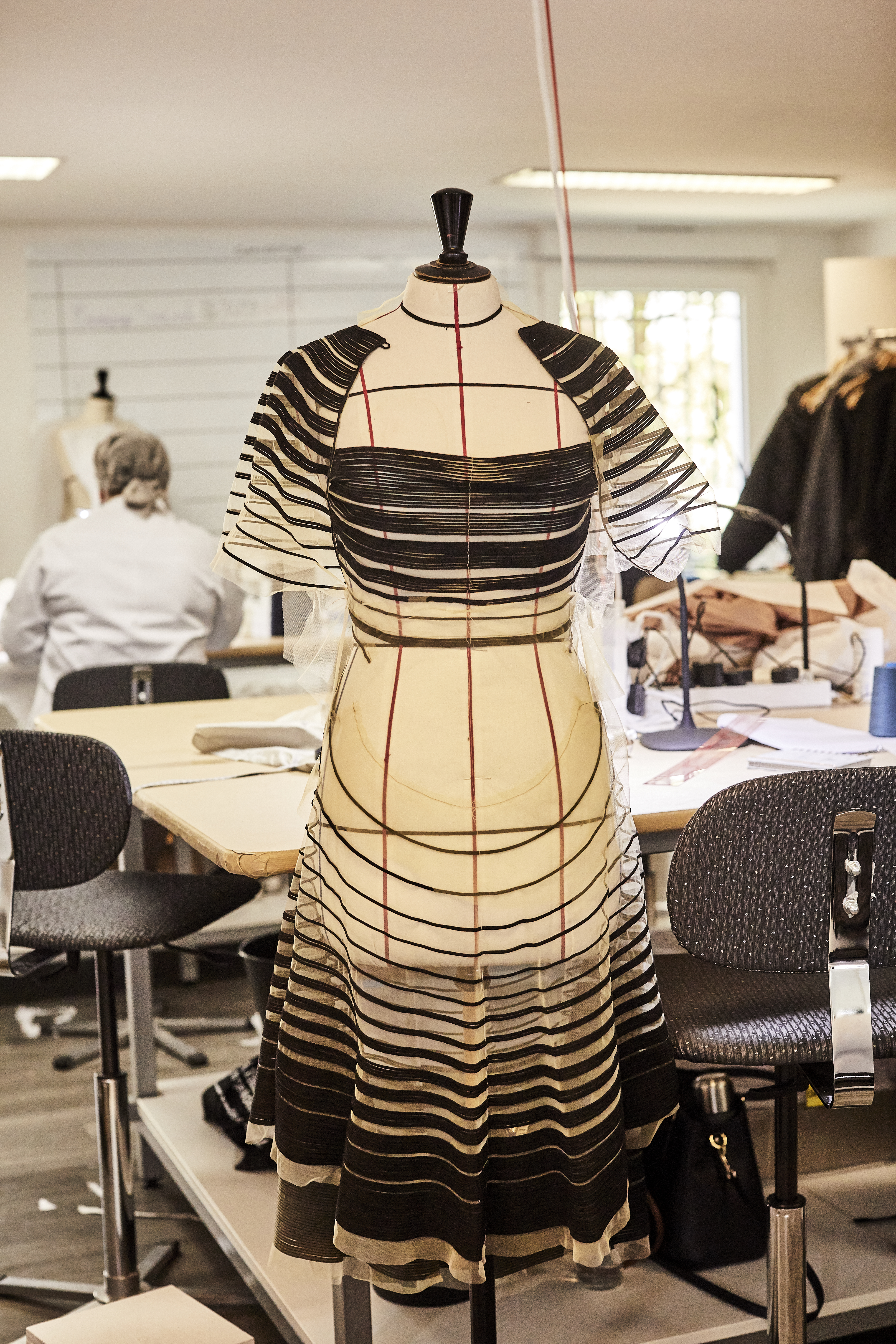 A work in progress at the Renaissance workshop in Paris. Laurence Laborie/Courtesy of Renaissance

He said the initiative has been welcomed by residents in the Cité du Vercors housing project in Villejuif, which has struggled with crime — though on a recent summer afternoon, children were playing outdoors with their mothers.

“There have been reports of drug and arms dealing in this housing project, and we’ve been put here specifically to change mentalities,” Guilet said, noting that there has never been a theft at the workshop. “Obviously they can see we make beautiful things in here, and it makes a change from the ambient gloom.”

Likewise, cultural barriers appear to drop inside the workshop, with people of all religious backgrounds collaborating on the gender-fluid collection, which nodded to Gaultier’s influence with men in heels and sheer women’s dresses. “Everyone leaves their cultural baggage at the door. It hasn’t been an issue,” Guilet said.

Wearing a white work coat, he sets the tone for the place with a mixture of stern admonishments and warm encouragement. In one corner, a seamstress assembled tubes of fabrics made from flight attendants’ ties into a bustier dress. In another, a dressmaker’s dummy displayed a coat assembled from embroidery samples.

Guilet has capitalized on a growing trend for sustainable fashion, which has been reinforced by the introduction last year of a French law banning companies from destroying unsold products. His “Detox ton Stock” program aims to help fashion brands find new uses for their inventory.

“Maison Alaïa has ordered a collection of 15 pieces that is made entirely from their stocks of unsold garments, and will be presented in September,” he said, noting that Monday’s runway collection was designed as a showcase to attract additional partners.

“The collection with Alaïa is making a lot of noise, because people are wondering how a small organization that provides vocational training to jobless people has managed to work with Alaïa on pieces that are actually destined for sale,” he said. 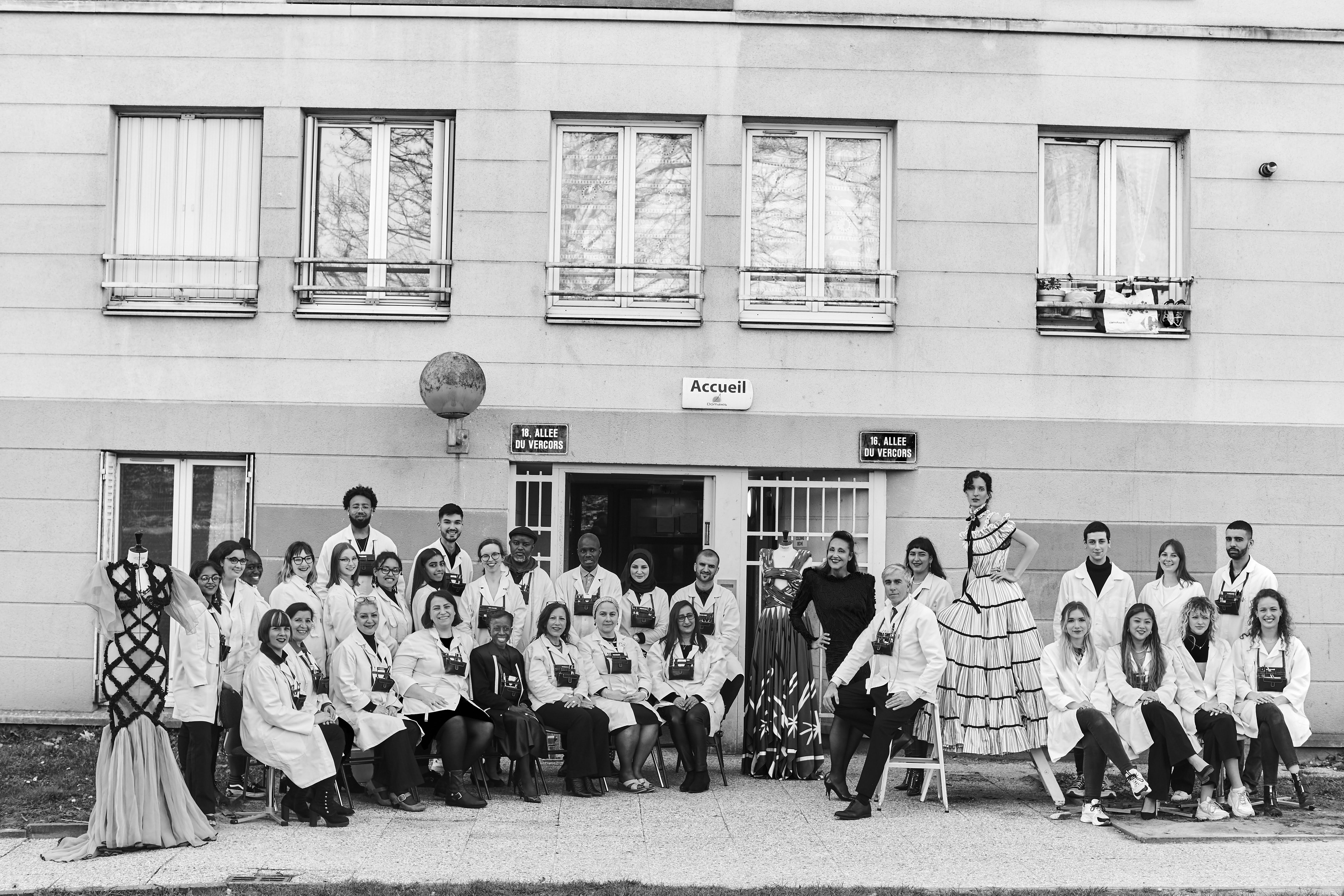 The class of 2020 at the Renaissance workshop in Paris. Laurence Laborie/Courtesy of Renaissance

Some are embroidered on-site, while others are embellished in India via a partnership with the Kalhath Institute, an embroidery center in India cofounded by Maximiliano Modesti and Amine Dadda, which has donated 2,500 hours of embroidery by its students toward the project.

Guilet has managed to attract a number of other high-profile backers, with donors ranging from leading socialites like Jacqueline de Ribes, who gave one of her couture gowns, to companies including construction firm Vinci and airport operator Groupe ADP, which have donated uniforms for upcycling. 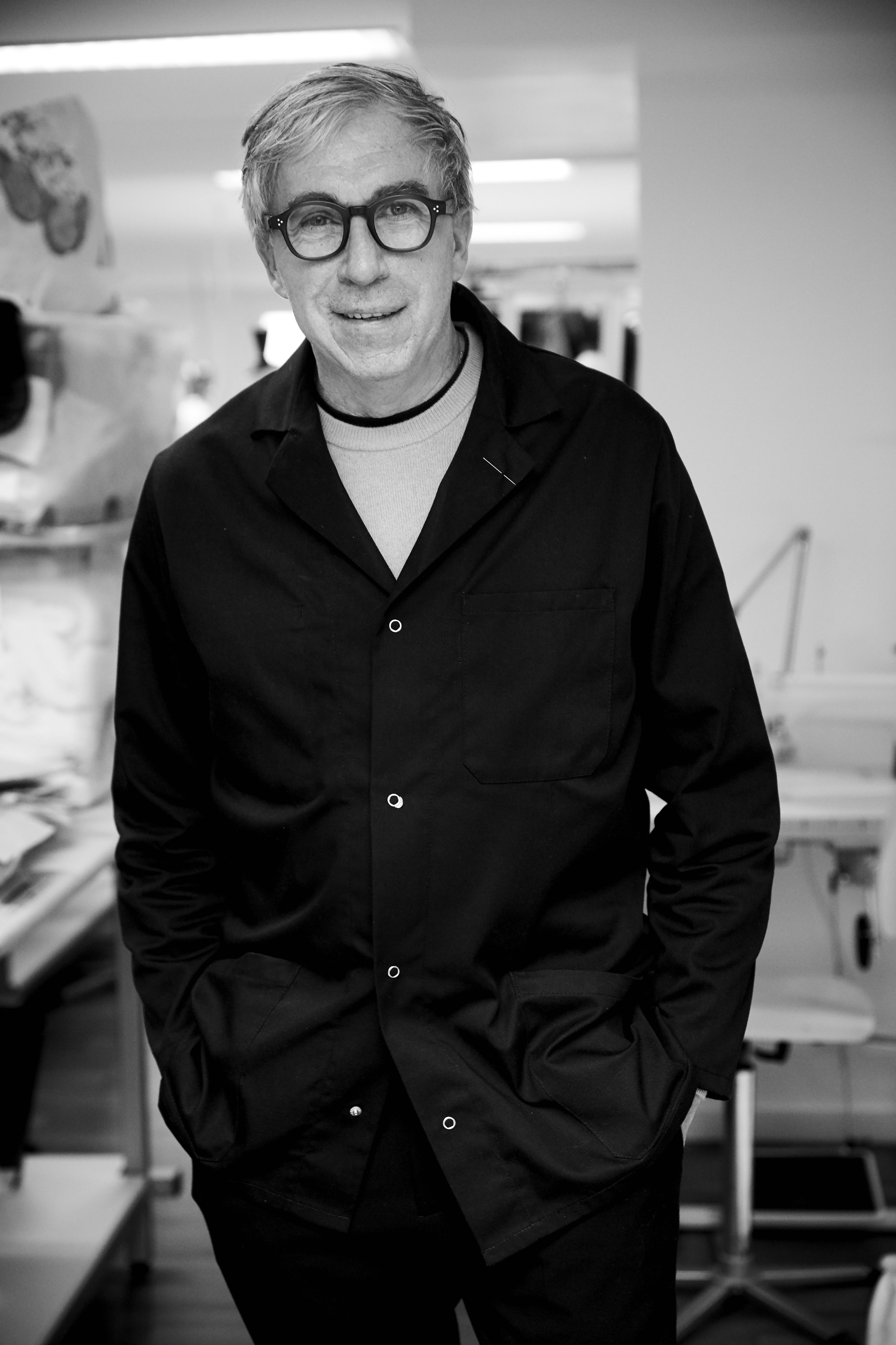 With business picking up after 18 months of coronavirus restrictions, Guilet predicts a rise in demand for qualified labor from leading haute couture houses.

“Since we’re getting a lot of interest from the sector, I’m asking our partners to take on the best in class for internships of at least three months. If all goes well, it will lead to more permanent employment,” he said. “If it wasn’t for COVID-19, a lot of them would already have started.”

The pieces presented this week will be auctioned at Drouot in September. A lot of donors have expressed interest in reacquiring the outfits made from their old clothes. Guilet, meanwhile, is already thinking about the next intake of trainees, due to start in October.

“It’s a lot of work, but it’s all worthwhile when you see the end result,” he said. “Sincerely, every morning when I come here, I’m happy. It’s very gratifying for me, and I think for them, too. There’s such a strong and positive energy around this project that I don’t think that any other job could bring me the same satisfaction.”

Circularity and the Life of Upcycling: How Brands Can Look to Waste With Renewed Creativity