WHEN you're considering ending a relationship, who is the first person your turn to? Chances are, it'll be your best mate or your mum… or maybe even both.

But for one woman who is considering dumping her boyfriend, it's her fed-up NEIGHBOUR who is urging her to pull the plug on her relationship. 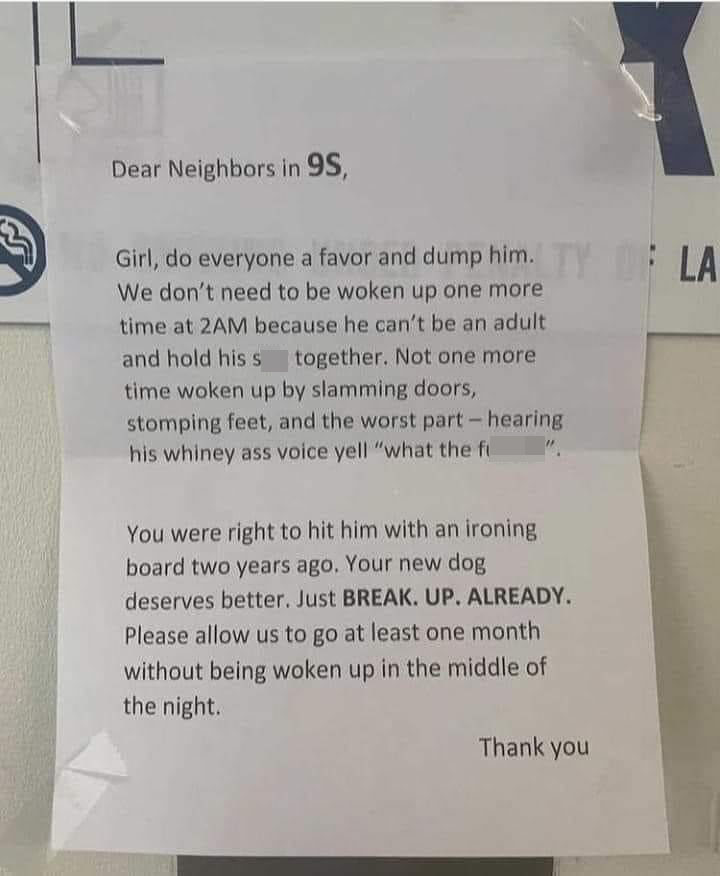 In a brutal note which was shared on Reddit's "Trashy" forum, the anonymous neighbour, from New York, asked the woman to do everyone in the building a "favour and dump him".

They wrote: "We don't need to be woken up one more time at 2am because he can't be an adult and hold his s*** together.

"Not one more time woken up by slamming doors, stomping feet and the worst part – hearing his 'whiny a** voice yell 'what the f***!'"

Referencing a previous incident between the couple involving an ironing board, they added: "Your new dog deserves better.

Just BREAK. UP. ALREADY. Please allow us to go at least one month without being woken up in the middle of the night.

"Please allow us to go at least one month without being woken up in the middle of the night."

Sharing the note on the forum, the Reddit user commented: "When your neighbours are exhausted of your fighting, it's time to reflect on some things…"

The note sparked serious debate in the forum and racked up over 880 comments.

Women's Aid has this advice for victims and their families:

Women’s Aid provides a live chat service available from 10am – 4pm Monday – Friday and 10am – 12pm on Saturday and Sunday.

One person replied: "They're in an abusive relationship. Highly inconsiderate to include an apartment building in that, but 'just breaking up' isn't that easy. This note is misguided and probably inconsequential."

"Why wait this long? Call the police for public disturbance," another added. "2am? Repeatedly? F*** that."

A third wrote: "WTF! Nobody is right to hitting anybody with an ironing board!"

For more viral stories, this woman was mortified after a friend filmed her accidentally giving people an eyeful – but it’s not quite as it seems.

And this man was in hysterics after realising VERY rude secret meaning behind the Macarena & people can’t believe they never knew.

Plus this woman found out she was dating her COUSIN after her boyfriend bought her a DNA test for her birthday.