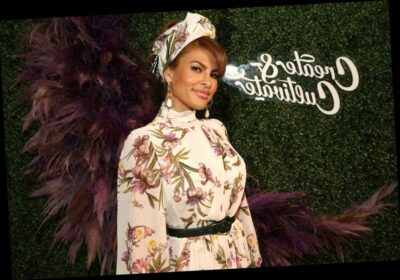 Eva Mendes is further explaining to fans why she's been staying quiet on social media.

Last weekend, the actress, 46, shared on Instagram that she would be taking a step back from social media after her daughter called her out for being "on the phone too much." Mendes shares daughters Esmeralda Amada, 6, and Amada Lee, 4, with Ryan Gosling.

Then, on Saturday, the Hitch star returned to the platform to wish a friend a happy birthday and received a comment from a fan accusing Mendes of leaving Instagram because she had "work done," seemingly referring to plastic surgery.

When one user responded to Mendes' post asking why she has been posting less to her Instagram feed, another user replied, "She's had work done and I don't think she's happy with it..🤷‍♀️ she was beautiful without."

Mendes answered the first user's question, writing, "I'm actually taking time to really be present with my family so posting is not really a priority right now."

In responding to the other user who claimed Mendes had "work done," the actress wrote, "I'm not sure why I'm answering you but here I go." "I'm posting less because I really want to be present for my family. My little ones need me and posting takes up too much time," the mom of two shared.

"As far as getting work done, I'll do that whenever I please. But no, that's not the reason. The reason is I personally cannot juggle family and social media. So -big shocker -I choose family. Lotsa love to you out there," Mendes wrote.

Another user praised Mendes for putting her "family first," to which the star replied, "thanks for getting it."

"Some people can juggle both and that's great but I can't," Mendes admitted. "Anyway speaking of not be able to juggle both, need to go be with them now. They're in the other room and being too quiet. That's never good. Ha! ❤️‼️." In announcing her decision to step back from social media last weekend, Mendes shared a piece of parenting advice that she called an "important reminder."

"Let your kids call you out. It's not disrespect. It's healthy," read the post, originally from Twitter account Latinx Parenting. "Kids can be so fiercely aligned with their value that they will take nothing less than the respect they deserve. They will take no BS. Not even from you. Congratulations, you are raising an empowered child."

"I haven't posted lately because my little one told me I was on the phone too much," Mendes captioned the post. "I could tell she was taking it personally. And she's a kid, of course she'd take it personally. They take things personally unless we go out of our way to make it clear to them it's not personal."

"So we had good talk, I apologized and I promised her I'd be mindful. I realized that just because I'm always home with them doesn't mean I'm always present. ❤️," Mendes added.