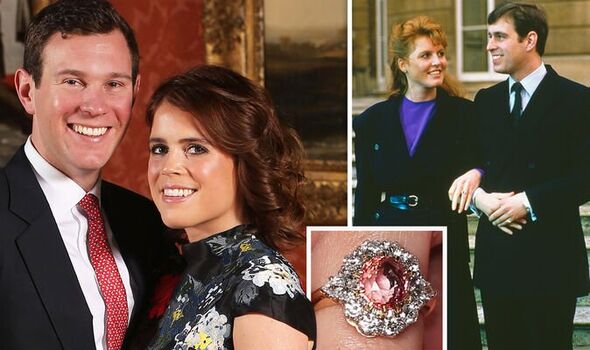 Prince Andrew and Sarah Ferguson announced their engagement on March 16, 1986, and showed the world a beautiful ruby and diamond ring. Despite separating in 1996, the ring Fergie was presented with is still one of the most talked about pieces of jewellery today. Steven Stone jewellers took a look at the piece and drew parallels to daughter Princess Eugenie’s engagement ring that she was given by Jack Brooksbank on January 22, 2018. When analysing the two rings, the experts noticed one difference in designs.

Sarah’s ring bears resemblance to Princess Diana’s Garrard ring; it has one big Burmese ruby surrounded by ten diamonds that form a flower pattern on a yellow gold band.

The Burmese ruby is three carats and the colour is intensified against the sparkling diamonds.

The ring is believed to have been crafted by British jewellery house, Garrard, the same place that made Princess Diana’s iconic sapphire piece, as well as Sophie Wessex’s dazzling ring.

When discussing the ring’s design in their engagement interview, Prince Andrew explained the choice of colour was to represent Sarah.

The “extra bits on the outside” were to meet the couples desire for something unconventional.

But inflation and the royal history behind it now means it could be valued in the region of £70,000, according to jewellery expert, Maxwell Stone.

So where is the ring now?

With jewellery absent from the couples divorce settlement, it’s unclear whether Sarah is the owner of the ring today.

If she was granted the same rights as Princess Diana, then she will have been able to hold on to her jewels.

It is believed inspiration was taken from Fergie’s engagement ring as there are notable similarities.

The experts at Steven Stone analysed both rings, revealing that while they feature different centre stones, the design is “remarkably similar”.

Maxwell said: “Princess Eugenie doesn’t have a traditional diamond at the centre of her engagement ring design.

“Instead, she received a Padparadscha sapphire from Jack Brooksbank.

“These are extremely rare stones which many people haven’t even heard of.

“They are strikingly beautiful with unique shades of pink and orange, often resembling the colours of a sunset.”

“The centre stone is an oval cut Padparadscha sapphire, which looks to be around three to four carats.

“This is a notably rare gemstone thanks to its unparalleled salmon hue.

“It is surrounded by 10 brilliant cut diamonds and two pear cut diamonds, which do a remarkable job of emphasising the sapphire, to create an eye-catching finish.

“This sapphire is mainly obtained in Sri Lanka and resembles the area’s peach coloured flowers.”

He continued: “The stones are set on a Welsh yellow gold band, which is a custom for royal brides, with two stunning tapered diamonds at the shoulders of the yellow gold shank.”