A DIY enthusiast has shown off the incredible result of hard work and creativity after completely transforming her outdated kitchen on the cheap.

Rachel Rose wanted a brand new kitchen for her Glasgow home, but wanted to keep the costs down -so took to it with a paintbrush instead giving is a bright, modern makeover. 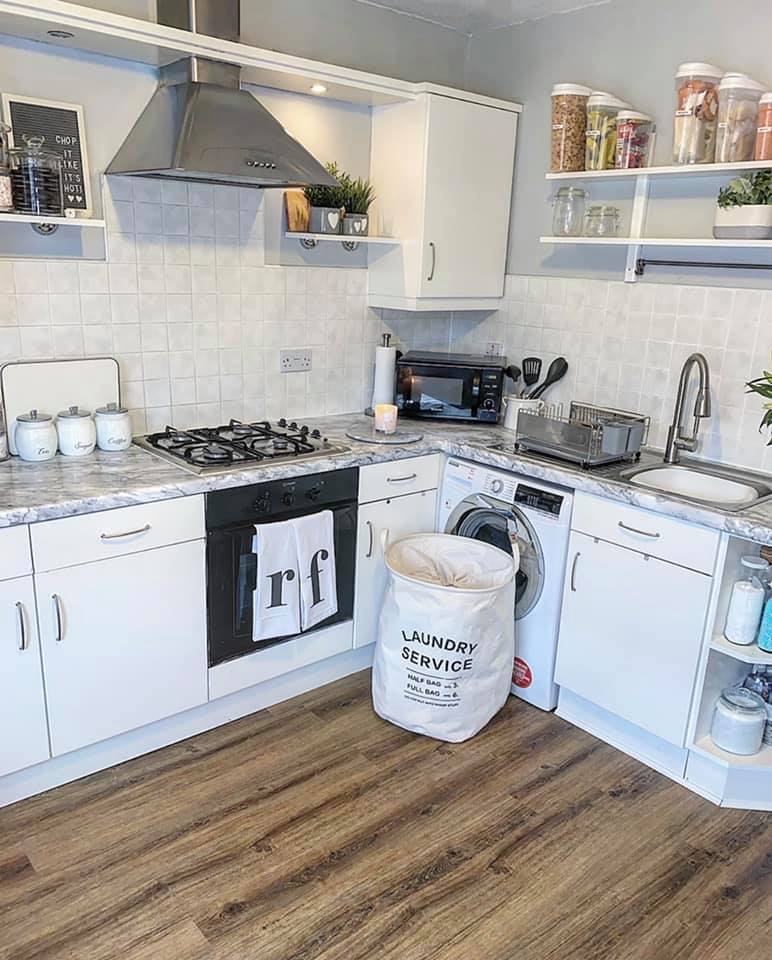 Opting for a white-wash, modern look, Rachel, who shares her home interiors on Instagram,said she achieved the look by painting the cupboards with Wilko paint and tackled the work tops with modern marble-effect sticky-back plastic.

But the DIY fan thought of everything – even a solution for extra storage.

Rachel said she picked up some storage extenders from The Range for just £3 which helped her declutter and store more in the cupboards.

Speaking of the cost involved, Rachel told Fabulous that she was gifted the Wilko cupboard paint, which normally costs £20 a tin -which meant saving some extra money. 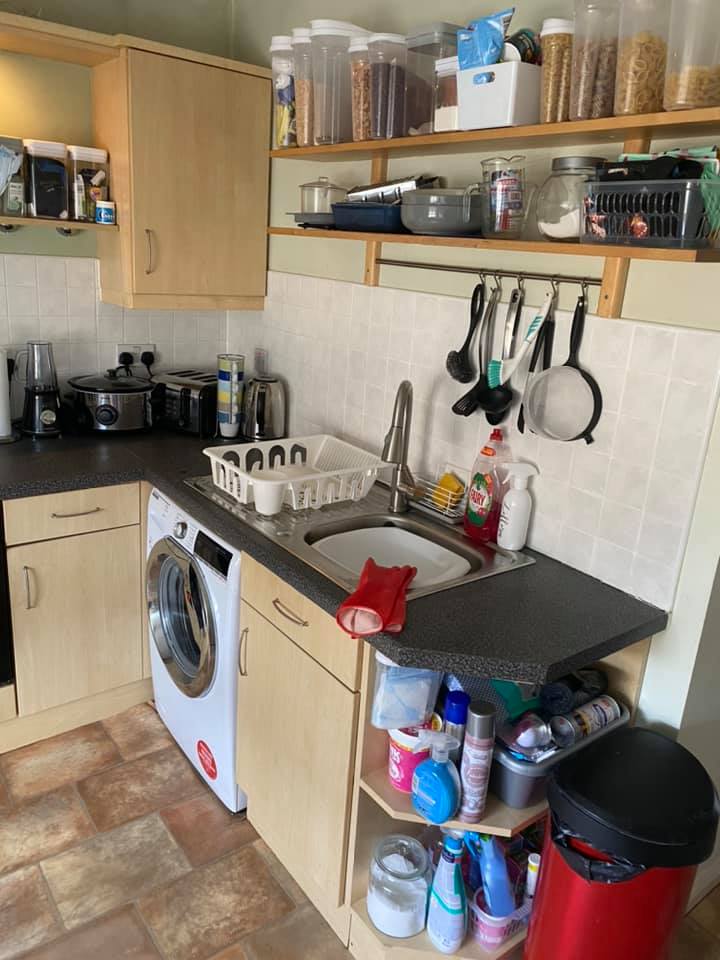 Before adding a lick of paint, she washed the cupboards down with sugar soap and lightly sanded them before adding a primer and a couple of coats ofpaint.

Detailing the process, she revealed: "The work top was in good enough condition but just needed updated so we vinyl wrapped it. It was from a company called create your world- total cost for that was £18.

"The accessories I had already got but not found a place for so that saved money there.Shelving was upcycled with the same furniture paint. Luckily the tiles didn’t need upcycled so they just got cleaned and then I regrouted them with a pen that costs £5! "

Rachel also replaced the blinds with new ones from The Range which cost her £22.99, and thought up a clever way to fix her uneven floors without it costing a fortune. 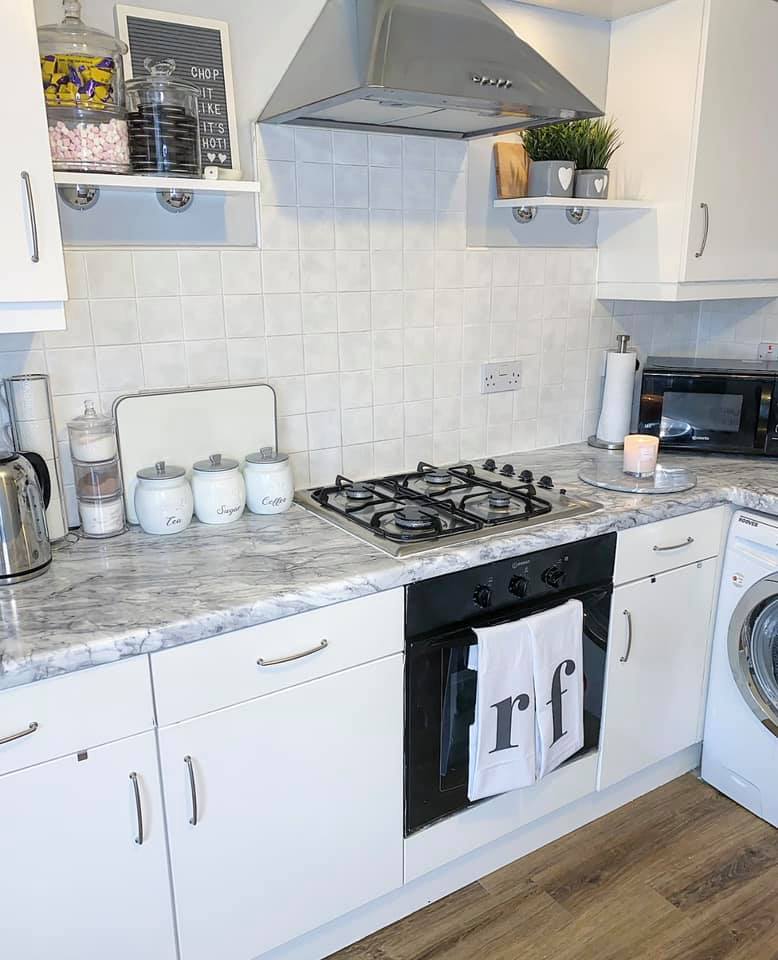 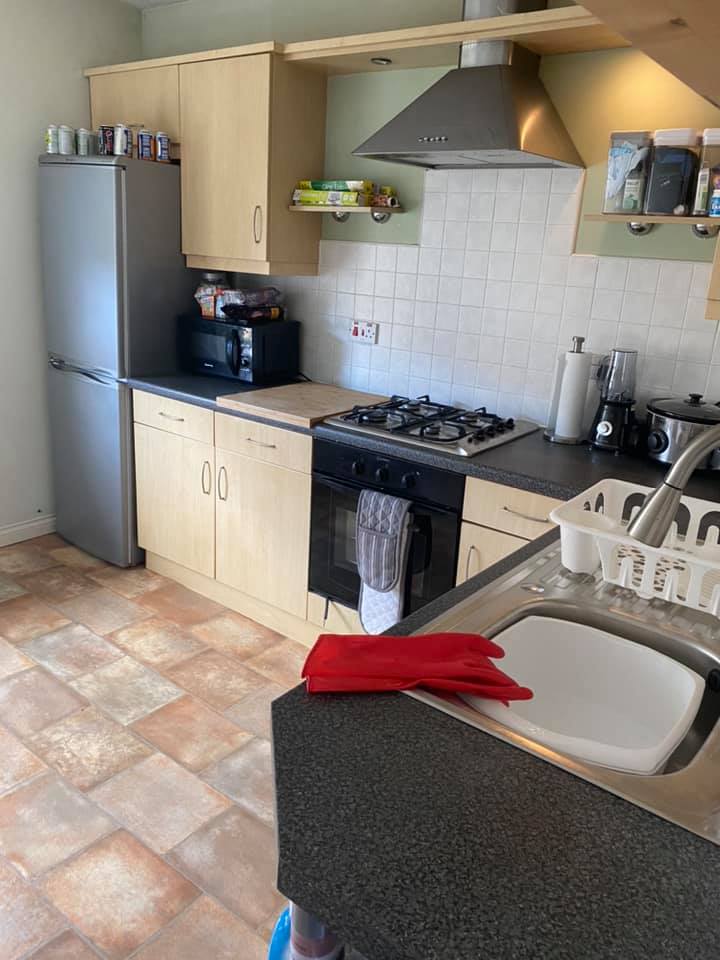 To avoid the extra costs involved in replacing the floor, Rachel said: " We saved money by buying the self levelling concrete x2 bags for £20 each from wickes and followed youtube videos to lay it ourselves."

And added: "The underlay was from b&q it was £7.50 per pack we got 3x packs but only needed 2x so we are using the rest for around the flat.

"The flooring is deco click vinyl which is super easy to lay and cut yourself as it clicks into place. That was on offer at b&m and we got it for roughly £22 per box (usually it costs £45) and used 5x boxes."

Rachel said that by doing it all herself and not calling in professionals saved her and her boyfriend a heap of cash, and that focusing on "one major task at a time made it easier." 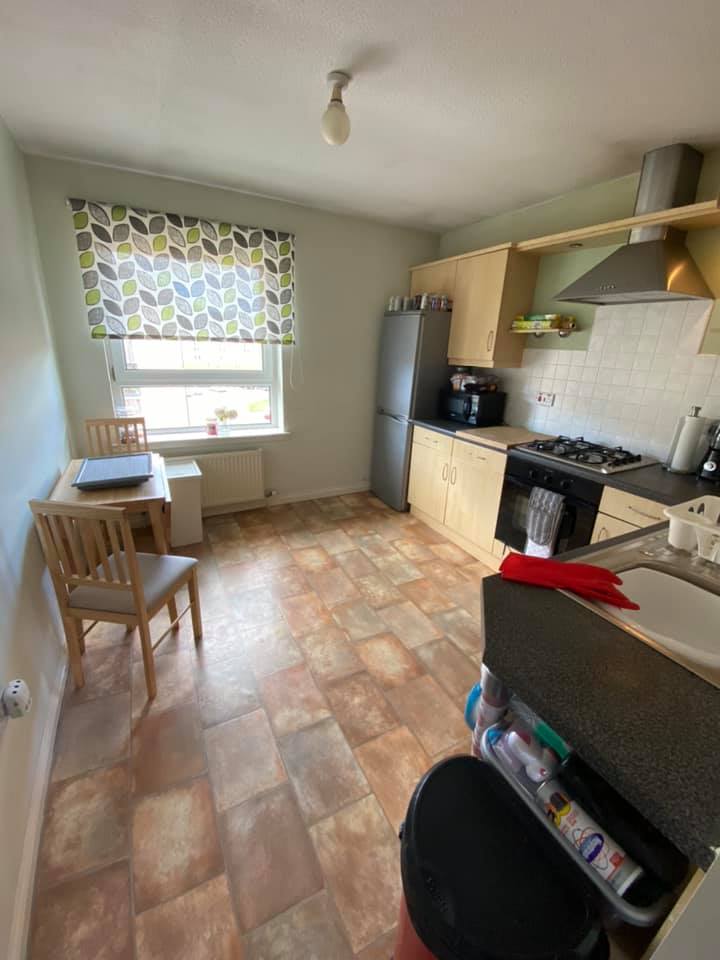 As for the "storage extenders", Rachel admitted:"They’ve been a life saver for the limited space!"

Rachel posted snaps of the incredible makeover in the Mrs Hinch Made Me Do It Facebook group, which was met with a huge response from people loving the chic design.

And another said: "Brilliant! Massive difference! Well done both of you x

While a third gushed: "I thought your “before” pictures were the re-done ones and then Bam! … the real “after” pictures. Wow! Such an amazing job! Truly!"

We also shared how a DIY fanatic completely transforms three-bed house in three weeks & did it on the cheap thanks to Dunelm & Ikea bargains.

And a mum shows off immaculately-organised kitchen with rows of perfectly-labelled jars, but some think she’s gone too far.

Plus we reveal the best home transformations you can do for under £30, from hotel-inspired bathrooms to stunning kitchen makeovers.