It’s a footnote to a footnote, the tale of how, with the assistance of hair and makeup and a progressive London tailor, Sean Connery zeroed in on what came to stand as the enduring sartorial standard for spies.

Yet the story is worth reprising because while the many front page obituaries for the star made a point of detailing the breadth of his accomplishments over a career spanning decades, no one can argue that his most indelible role was 007.

What is less often noted is how Mr. Connery’s Bond image, like most everything concerning the most stylized spy in history, was as meticulously assembled as his Walther PPK. 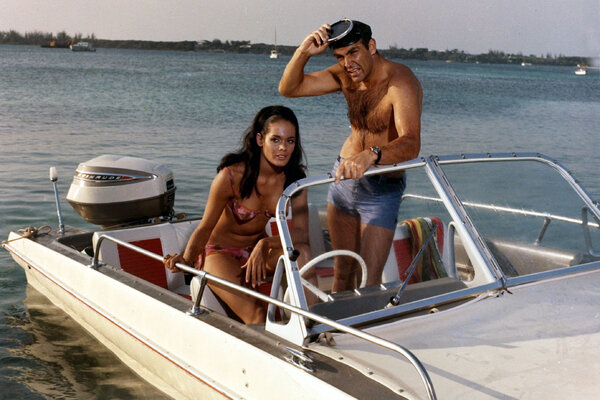 According to legend, Mr. Connery got the part after being spotted playing the implacable cad Count Vronsky in a 1961 BBC adaptation of “Anna Karenina.” It was less his handsome face, with its deeply grooved cheeks and the bushy eyebrows he deployed like sardonic brackets, that landed him the role than his feline way of moving.

“We signed him without a screen test,” said Harry Saltzman, who produced the Bond films with Albert Broccoli, after seeing a clip of Mr. Connery walking.

The film critic Pauline Kael, a longtime Connery devotee, was far from the only observer to tumble to his athleticism, his “richly masculine” vitality, as she wrote, and his commanding physical presence. Lana Turner chose Mr. Connery to play opposite her in the 1958 melodrama “Another Time, Another Place,” based on what was then termed animal magnetism (and nowadays is often referred to by a three-letter acronym for virile energy not printable in these pages).

If anything, the 6-foot-2 Scotsman, a former bodybuilder and artists’ model, may have had more sexual vitality than required for the part of 007 as written: a character anchored in a “tradition of English ruling-class heroes” that had long dominated spycraft, as the British sociologist and author Tony Bennett wrote in “The International Journal of James Bond Studies” in 2017.

Among the original candidates for the role of an MI6 toff were such war horses of Hollywood’s British colony as David Niven and James Mason. Eager to downplay the Bond character’s more glaring upper-class mannerisms for a franchise pitched toward an international audience, the producers instead chose the working class actor from an Edinburgh slum and set about moderating his assertive physical presence with the varied tools of sartorial suavity.

Naturally they started at the tailor. Later spies like Jason Bourne would dress as anonymously as a garage attendant or lawn boy. But Bond was fitted for suits at the Anthony Sinclair establishment on Conduit Street at the northern end of Savile Row. The reason was simple: Terence Young, the director of “Dr. No,” the first of the official Bond films, ordered his suits there.

Whether, as some have suggested, Mr. Young formed Bond in his image, there is no question that, as a former Irish Guards officer, intelligence officer and a product of elite public schools and Cambridge, he brought to the production an unusual level of knowledge and sophistication. For himself, as for Bond, Mr. Young preferred the military-inspired cut of Sinclair’s single-breasted jackets, with their natural shoulders and gently nipped waists to the boxy double-breasted suits Savile Row was still turning out well into the 1960s.

If it happens that the details of Bond’s dress are often too subtle to register at first glance, that is probably as it should be. Still, the cavalry-cut trousers with crisp reverse pleats; the cocktail cuffs turned back like the French type, although fastened with buttons rather than links; the tight polos and blousy camp shirts seldom worn by any outside the leisured classes in that era; and even the crisp pocket handkerchiefs Bond wore neatly squared did not go unobserved by the style-conscious.

Certainly it was noted by men’s wear designers. When it came time for Tom Ford to outfit Daniel Craig in his most recent Bond incarnation, he wisely turned to the Connery original for inspiration. He sharpened and decluttered an image that had grown fussy over time (the Brioni years, in particular, from “GoldenEye” to “Casino Royale” have failed to age well), while showcasing another hunk with his own set of distinctive physical assets.

“Connery’s Bond embodied a new kind of masculinity for the time,” Italo Zucchelli, the onetime men’s wear designer for Calvin Klein, wrote in an email. “No matter if he was in a form-fitting, sculptured suit, a sharp tuxedo or showing off his chiseled body in a swimsuit, he exuded a sexuality that made him irresistible.”

Often enough, it should be remembered, Mr. Connery’s Bond was nearly naked.

Beefcake Bond was clearly the producers’ nod to evolving mores and an increased comfort among men — or, anyway, Mr. Connery — with being subjected to frank physical appraisal. It was also clearly a style.

Mr. Young’s contribution to all of this was to keep things racy without careening into the red zone of camp. To that end, as Lois Maxwell, the Canadian actress who played the original Miss Moneypenny, once explained, Mr. Young tutored Mr. Connery in the ways of gentlemanly refinement, instructing him on how to walk and talk and even hold a fork. He conducted him to carriage trade purveyors like Swaine Adeney Brigg for Bond’s attaché case, John Lobb for his shoes and purportedly the sanctums of private men’s clubs to see how the upper-crust types on which Ian Fleming based his seductive professional killer disported themselves out of sight of the public.

While Fleming was scant in his physical description of Bond (lavishing signifiers and adjectives instead on his villains), Mr. Connery, like every actor worth his salt, absorbed all he could from the text, as well as from Mr. Young and the unfamiliar worlds to which he was suddenly given access.

And, like every human who ever gave thought to the performative nature of dressing, he grabbed hold of the props provided to him — a midnight blue Conduit Cut dinner jacket worn over a flat-front Turnbull & Asser shirt; a brown Sandow Trilby from Lock & Co; the polo shirts and suits in varied subtle tones of gray; even the infamous baby blue “Goldfinger’’ terry cloth onesie — and owned them.