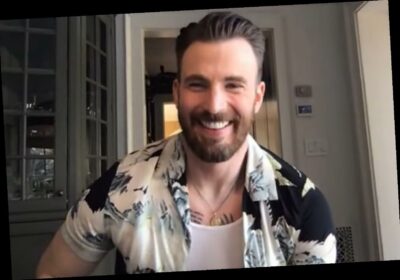 Captain America has sent the internet into a frenzy.

During an interview with ACE Universe's Angélique Roché on Tuesday, Chris Evans left his shirt unbuttoned, giving a rare glimpse of two chest tattoos peeking through under his white tank — and fans on social media can't get enough.

"Chris evans in floral shirt with the tattoos peeking and the chain? This is what heaven looks like," one person wrote on Twitter. "Everything to me," a second social media user captioned a gif of the Captain America star.

A third fan used a Taylor Swift lyric to express her feelings for Evans, joking, "#CHRISEVANS: I'd marry you [with] paper rings."

During the interview, the famous brothers answered questions from fans about life in quarantine amid the COVID-19 pandemic, upcoming projects, childhood memories, the best advice they've ever gotten and more.

Evans previously showed off all of his chest tattoos when he jumped into a pool shirtless in a video shared on his Instagram Story in October.

While we don't know the backstory about the ink on his chest, we do know that back in 2018, Evans' Avengers costar Robert Downey Jr. revealed that they, along with Scarlett Johansson, Chris Hemsworth and Jeremy Renner, all got matching tattoos.

"Five of the original six Avengers got a tattoo," Downey Jr., 55, told Entertainment Weekly, noting the one actor who opted out was Mark Ruffalo. "It was (Scarlett) Johansson's idea, and she and (Chris) Evans did it in New York. Then, their New York guy, Josh Lord, who is amazing, flew out to L.A., he did me, did (Jeremy) Renner, and then we just bullied (Chris) Hemsworth into doing it, and he got it."

"Each one of us drew a line on the artist with his own tattoo gun and it was a total massacre," the Iron Man star recalled. "Each of us contributed to giving the tattoo artist the sixth tattoo that he designed for us. By the way, he's got another one on him that Scarlett did, which is beautiful, which is crazy, because the line she drew on him, which was just supposed to be a straight line, looked like a lightning bolt. It was a mess."

Earlier this year, it was reported that Evans would be suiting back up as Steve Rogers/Captain America, according to a report from Deadline.

Marvel did not immediately respond to PEOPLE's request for comment at the time and hours after Deadline's report published, Evans tweeted: "News to me."

Referencing Evans' prior social media statement, Feige spoke candidly to EW about a future for the superhero favorite, telling the outlet, "I rarely answer no to anything anymore because things are always surprising me with what happens, but that rumor, I think, was dispelled rather quickly by the man himself."

Evans has always been vocal about hanging up his shield, even sending fans into a frenzy when he tweeted a heartwarming goodbye to Avengers: Endgame and his role in October 2018 — signifying that the film could be his last time playing the character.

"Officially wrapped on Avengers 4. It was an emotional day to say the least. Playing this role over the last 8 years has been an honor. To everyone in front of the camera, behind the camera, and in the audience, thank you for the memories! Eternally grateful," Evans wrote at the time.