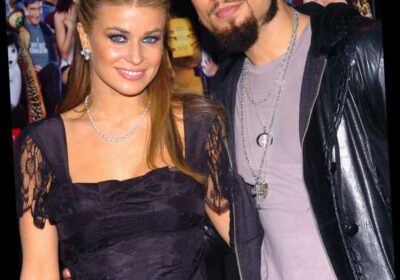 Being the '90s beauty icon that she is, Carmen Electra is spilling all the tea about her famous exes' grooming routines.

Speaking exclusively with PEOPLE after the launch of her three-step skincare line, GOGO Skincare, the model, singer and actress talked all things beauty and revealed that, of the many famous men in her life, Prince smelled the best.

"Always Prince. He loved perfume," Electra says of the late music icon (whom she shared a close professional and personal relationship with after he helped launch her career in the early '90s). "I remember he loved Carolina Herrera." The Baywatch alum continues, "He loved women's perfume. He had this beautiful table set up with all of his perfumes and body creams, and he always smelled amazing."

Despite Prince's status as a fashion and beauty icon, Electra says ex-husband Dave Navarro (whom she was married to from 2003-2006) took longer to get ready. "He had hair, and makeup, and he would get into the vibe. Yes. He loved it." Still, the Scary Movie franchise star admits she "for sure" had the bigger closet during their time together.

"He liked his look," she says of the rockstar, who's a member Jane's Addiction and a former member of the Red Hot Chili Peppers. "At that time, he was into leather pants. He was a shirtless guy. He was the shirtless guy in leather pants with the amazing body, and he had eyeliner, and it was just cool. It worked for him. I mean, he was. He looks amazing."

During the interview, the former Playboy model also reflected on her own '90s style and explained why she loves posting throwback photos of her most iconic looks on Instagram.

"Instagram to me is a way to communicate. People will send me photos I've never seen before. And it's fun," she says. "The '90s are so back. It's wild." Looking back on her bold and often risqué fashion moments throughout the decade, Electra shares, "I had a stylist that would dress me in these sexy cut-up dresses and they were very revealing, and they were very forward. And at the time, it was shocking. People were kind of like, 'Whoa, what is that? That's too sexy. We need to tone that down.' Now everyone's wearing cutouts and being creative with that." Electra had a signature beauty look too — big, bold lashes. "We were always experimenting, doubling [false] lashes, cutting. I mean, this is early '90s. Nobody was really wearing them," she shares. "So it was kind of like my special thing. I continued to wear them throughout the '90s, whenever I could. That was the real me."

Adding, "I mean, honestly, when I went to the grocery store, I had lashes on. Going to Bed, Bath and Beyond in latex," she says. "Latex and lashes. That was the '90s for me."