Home » Fashion » A Power Couple Finds the Spark Once Again

A Power Couple Finds the Spark Once Again When Hal Aronson walked Dr. Laura Stachel back to the hospital after their first meeting in March 1999, neither wanted to say goodbye. They weren’t at all each other’s type, yet their chemistry was instant. They hugged.

The two had connected on Match.com, then met for coffee at 8 a.m. during the hour break between her night shift as an obstetrician-gynecologist and seeing patients at Alta Bates Hospital in Berkeley, Calif., where both live.

Dr. Aronson, who has a Ph.D. in environmental sociology and was then an adjunct professor at San Francisco State University as well as a carpenter, described how Dr. Stachel “whooshed” into the cafe. Their conversation was interrupted by phone calls, with Dr. Stachel instructing nurses to give this patient an intravenous line or to up another’s medication. He noticed her hands. They were strong.

“It’s harder to be in relationship with powerful women,” Dr. Aronson said. “But those who don’t have it aren’t as compelling to me.”

Neither remembers much of what they had talked about. They might have bonded over their both moving around a lot as children. Dr. Stachel spent the majority of her later childhood in the Boston area; Dr. Aronson in Austin. Each was a child of a renowned professor. Her father, John Stachel, is a retired professor of physics and editor of the works of Albert Einstein; his father, Elliot Aronson, is a retired social psychologist and founder of the Jigsaw Classroom, a teaching technique that promotes understanding between different ethnic groups. Their mothers both went into similar professions, too. Dr. Stachel’s mother, the late Evelyn Wasserman was a social worker, and Dr. Aronson’s mother, Vera Rabinek, becoming a lay counselor working with elders, after raising four children. 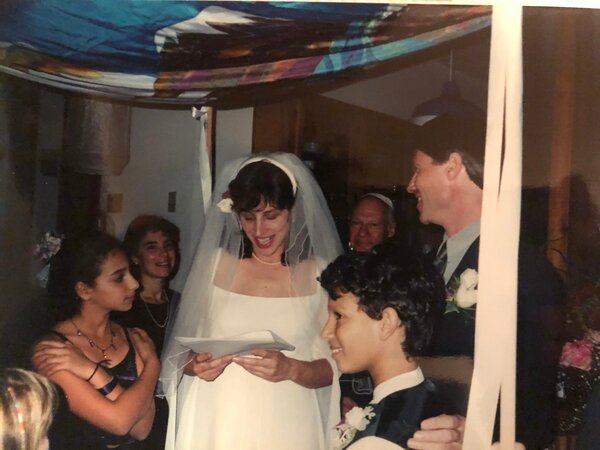 Each had been married before, she to an Israeli, with whom she had two children, and he to a Hungarian woman whose son he helped raise.

The attraction on Dr. Stachel’s side was also immediate, both physically and intellectually. “The two adjectives I use to describe Hal are gentle and strong,” she said. “He’s also so passionate, both about the world around him and the people he loves.”

After that first meeting, Dr. Aronson left to go on a several-day camping trip. They were a couple as soon as he returned.

Dr. Stachel had just turned 40, and Dr. Aronson was 43. Within a few weeks he proposed, but then had doubts. Having already been a stepfather, her household, with her frequent night shifts and two young children was a lot for him to take on.

“It was chaotic, and not exactly a life that would fit me energetically,” Dr. Aronson said. “I strive for ‘be here now,’ and to be more present, while she’s at her happiest changing the world. I like all that stuff, too, but in a more balanced kind of way.”

Then Dr. Stachel got pregnant.

A therapist told them they had too much to work out before bringing a child into their lives.

Dr. Stachel had once seen a psychic. Even though neither were the type to put stock in such things, she convinced Dr. Aronson they should pay him a visit. Addressing Dr. Aronson, he recalled the psychic saying: “You’ve never put both feet in fully. This child will help you get there.”

“It resonated with what I really wanted,” Dr. Aronson said.

Dr. Stachel was 18 weeks along when they married on Nov. 4, 2000. With friends officiating, they signed a ketubah, a Jewish wedding contract, but never made it legal. Dr. Stachel had baggage from her divorce, and didn’t consider it a priority.

Their daughter Rachel was born in April 2001.

Then, in 2002 Dr. Stachel’s career as she knew it abruptly ended. The discs in her back were degenerating, causing severe pain. “I was this workaholic, achievement-oriented woman at home with a baby I couldn’t even lift,” she said.

She needed intense physical therapy and rehab, and decided to pursue a master’s degree and then later, a doctorate in public health at the University of California, Berkeley. Meanwhile, as an early, self-described “solar evangelist,” Dr. Aronson founded a nonprofit organization, training youth to do energy retrofits in low-income housing.

In 2008, Dr. Stachel went to Nigeria to study why women are so much more likely to die in childbirth there than in the West. She saw how in some areas, the power is out 12 hours a day, and laboring women showing up to the hospital, already with complications, had little chance of a normal delivery.

“They had between three and eight women dying every month,” she said. “In two weeks there, I saw more complications than I had seen in my entire career.” What troubled her most was how preventable these deaths were; these same women would be alive had they given birth in Berkeley. She felt she was there to bear witness for these women, and shared the horror she was feeling with the person closest to her, her husband.

“If I had been with any other partner, I’d still be talking about the problem,” she said. “Hal came up with the solution.”

Within days after her return, Dr. Aronson designed four solar electric units for the hospital, and created a portable demonstration kit in his backyard workshop that Dr. Stachel took to Nigeria. The hospital’s maternal death rate plummeted 70 percent.

Their work there was done, they thought, until news began to spread throughout the country, then the continent. Their demo kit evolved into what they called the Solar Suitcase, and We Care Solar, the nonprofit group they founded, took off. Funding started coming from the MacArthur Foundation and many other sources.

Dr. Stachel’s arrival to a new village with the suitcase was often greeted with exuberant singing and dancing. We Care Solar has since taken over 5,000 suitcases — that are now made in a Colorado factory — to hospitals, clinics and disaster relief areas around the world, with the majority of them in Africa and Southeast Asia.

That their professional passions could overlap to bring so much positive change in the world was exhilarating to both, and something they couldn’t have imagined. The very same solar equipment Dr. Stachel used to call “an eyesore” in their backyard now was the subject of their pillow talk.

“It’s really hard to change energy policy,” Dr. Aronson said. “But to make something that immediately was making a difference in the lives of people was mind-blowing.”

But over time, their relationship began to fray.

While both of their profiles rose in their respective fields, as well as in each other’s field, Dr. Stachel became more of the media darling — CNN named her a hero of 2013, in just one example — and was traveling to Africa often, staying for weeks at a time. Dr. Aronson was the stay-at-home father.

“Laura is this incredibly emotive, warm, charismatic person and so everyone in Africa was her new best friend,” Dr. Aronson said. “She didn’t have a lot left to give at home. The stuff we gained, in some ways, almost broke us apart.”

She had replaced night shifts at the hospital with nighttime phone and video calls to Africa. Dr. Aronson felt they were living parallel lives.

The children felt it, too. In 2012, they went to see the band Linkin Park, an early funder of We Care Solar. When the band inspected the solar suitcase backstage after a concert, 11-year-old Rachel Aronson told them “I’m their other product.”

“Most of my childhood memories are with one parent or the other, and the way I saw them relate to each other was mostly about me or work,” Rachel Aronson said.

For awhile, they ignored it and other issues that had arisen, as they could view their relationship in service to something greater than themselves. Finally, on Yom Kippur 2018, Dr. Aronson told Dr. Stachel something needed to change. They started therapy, relearning how to communicate and how to prioritize their relationship.

They looked toward their shared Jewish tradition to set aside one day a week, Shabbat, to spend with each other, with no work allowed, as well as 15 minutes of connection a day. They also looked to Zen Buddhism and the concept of “beginner’s mind,” approaching each other with curiosity, as if getting to know each other anew.

Then shelter-in-place because of the coronavirus pandemic and Dr. Stachel’s sudden lack of travel gave them even more time to deepen those conversations.

Perhaps that lack of togetherness in the earlier years has led to their ability to spend so much time together now, without tiring of each other, they joked.

Said Dr. Stachel, “We’ve fallen in love with each other all over again.”

Another silver lining of Covid-19 was that it caused conversations about Dr. Stachel’s lack of work-life balance to take place among all three children since they were all with them for a time (her son Ari’el Stachel, 29, is a Tony Award-winning Broadway actor; daughters Atalya Stachel Yeshayahu, 31, a dancer, lives in Oakland, and Rachel Aronson is in college at Warren Wilson College outside Asheville, N.C.).

With their 20th anniversary approaching, Dr. Aronson, 64, suggested making it official to celebrate the work they’ve done and renew their commitment. For Dr. Stachel, 61, it was an easy yes.

Rachel Aronson was ordained by American Marriage Ministries and married her parents on Nov. 4 at Mount Tamalpais in Marin County, Calif.

Dr. Stachel concluded her vows to Dr. Aronson with “as we enter this phase of our lives, I am truly grateful to be your partner. I am ready to recommit and solidify what we have, and eager to grow our relationship in ways we can only imagine.”

“This ceremony was about a committed family and not just about each other,” Rachel Aronson said. “They’re sticking it out and continuing to work on themselves and grow. They’re rewriting the script.”

Then she added, “It was both weird, and very much my family.”

Who: In addition to their daughter who married them, they were accompanied by Dr. Stachel’s two adult children, Ari’el Stachel and Atalya Stachel Yeshayahu; Dr. Stachel’s father, John Stachel; her sister, Deborah Stachel; and Karen Sokal, a friend who took photos.

The Forecast Unexpected hail and rain fell briefly at the exact time the ceremony was planned, but then sunshine broke through.

The Huppah The couple married beneath the same silk huppah Dr. Stachel painted for their ceremony 20 years ago, with Ari’el Stachel and Atalya Stachel Yeshayahu serving as huppah holders.