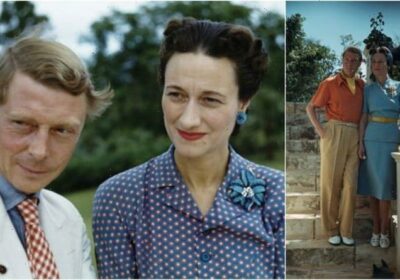 Wallis Simpson owned an impressive amount of jewellery. On Tuesday, November 9, at Christie’s Geneva auction, some of Wallis’ rarest pieces of jewellery were sold at auction. Wallis Simpson’s bracelet reappeared at auction for the first time since the 1987 ‘Jewels of the Duchess of Windsor’ auction of her collection, which fetched £37million.

This set a new record at the time as the most pricey auction of a single-owner jewellery collection.

On Tuesday, the Wallis Simpson diamond and ruby bracelet was estimated to fetch between £822,000 and £1.6million.

He said: “The Duchess of Windsor’s extravagant diamond and ruby Cartier bracelet was a gift from the Duke of Windsor on their first wedding anniversary.

“While many women might expect a paper-themed gift to mark a first wedding anniversary, the Duke had famously abdicated the throne in order to wed the twice-divorced Wallis Simpson and the rubies on this cuff bracelet are said to mark the passion, love and courage shared between these disgraced royals.

“Wallis Simpson’s impressive collection is the stuff of jewellery legend.

“At the 1987 sale of her collection, buyers included famous jewellery lovers including Elizabeth Taylor, the Hollywood star who later authored My Love Affair With Jewellery and who was close friends with the Duke and Duchess, and beloved British actor and celebrity Joan Collins.

“The sale attracted about 1000 bidders and 300 press to Sotheby’s by Lake Geneva for the event, with many items attracting up to 10 times their expected price.

“The Duchess of Windsor’s jewellery collection was closely tied to her relationship with the Duke of Windsor, linking romantic and personal stories with the individual pieces.

“Just think of her engagement ring, featuring a 19.77-carat emerald, with ‘we are ours now’ engraved on the band, referencing the couple’s decision to separate from the royal family to be married.

“Representing hope, the stone was a symbol of protection for their marriage.

“The bracelet in the auction on Tuesday, November 9 was the first anniversary present the Duke of Windsor gifted the Duchess and bears another sentimental inscription, ‘for our first anniversary of June third’.

“Some of Simpson’s pieces have been auctioned since the record-breaking auction in 1987.

“In 2017, a rare, fresh-water, asymmetrical pearl and diamond brooch that was originally a bag clasp went up for auction.

“The seller had acquired the piece from the 1987 auction.

“Rubies are traditionally considered a stone of kings, associated with power and wealth symbolism.

“It has been a long-held belief that possessing a ruby would increase wealth, impress rivals, and protect the owner and their estates from harm.

“The Duchess of Windsor’s jewellery collection sold for around £37million, six times the expected figure, during the 1987 auction.

“Wallis owned an extensive jewellery collection while being in a high-profile relationship with a powerful royal partner and she still fascinates people today.

“Wallis Simpson is frequently included on lists of royal women whose life was associated with wealth, glamour, and drama.

“Wallis’s reputation as a divorced American socialite who drove the Duke of Windsor to abdicate and leave his royal responsibilities to instead choose a luxurious life with her fuelled the rumours and interest surrounding her character.

“This intrigue stems from the mystique surrounding high society life and scandals.”