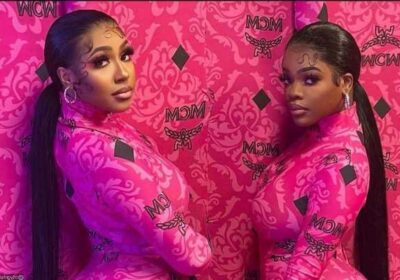 JT sparked pregnancy rumors as she was seen with what seemed to be a baby bump during City Girls’ performance in September and further fueled them by sporting an apparent morning sickness band.

AceShowbiz –Yung Miami has reacted to rumors about her City Girls groupmate JT being pregnant. While JT denied the speculations, it didn’t stop people from speculating. Now, Yung Miami has shared her opinion on the matter.

It started after she uploaded a picture of herself and JT. A troll then commented underneath the post, “JT is pregnant,” alongside a clapping emoji.

The comment didn’t go unnoticed by Yung Miami, who latter clapped back at the user. “No she is not! Y’all aggravating af with that. She’s not pregnant!”

JT sparked pregnancy rumors as she was seen with what seemed to be a baby bump during City Girls’ performance in September. Fueling the speculation, the Miami native also posted a selfie video which saw her wearing a morning sickness band.

JT, however, quickly denied the rumors. Of a video in which she put a sticker on her stomach area, she wrote on Instagram, “It’s getting weird!!!! I told him put an emoji there because my pants were dirty but I still liked the video I shouldn’t even have to constantly tell a bunch of strangers I’m not hiding s**t!!!!” She then stressed, “I’m not pregnant now leave me the hell alone!”

Later, she fumed regarding the matter on Twitter. “B***h can’t even use emojis no more!” she ranted. “I let y’all rock cause on some serious s**t if I was pregnant what y’all gone do? Nothing!”

The girlfriend of Lil Uzi Vert also explained her previous pic in which she was seen sporting a morning sickness band. “As a women half y’all h*s need to go educate y’all self nausea not only caused by pregnancy! & the way I control me nausea shouldn’t be y’all business,” she wrote.