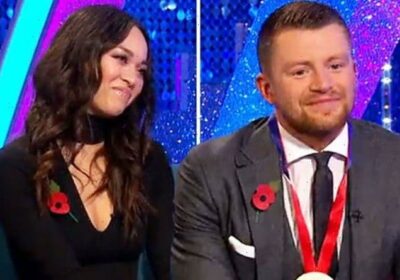 Adam Peaty and Katya Jones were eliminated from Strictly Come Dancing after the pair landed in the bottom two during Sunday night’s show. The dancing duo faced Tilly Ramsay and her partner Nikita Kuzmin in the BBC dance-off.

However, the Olympic champion, 26, bid farewell to the competition after the judges voted him off the programme.

The swimmer admitted he was “exhausted” as he addressed his struggles on the BBC show.

It comes as the Strictly contestant revealed Katya will get “jealous” if he finds another dance partner.

The gold medallist explained that he will continue to dance despite no longer being in the competition.

Rylan asked: “Are you going to keep on dancing?”

“Of course I am. But she’s going to get jealous though,” Adam replied, as he pointed towards Katya.

“She won’t let me dance with anyone else.”

He joked: “She won’t let go,” as Katya chuckled at his cheeky jibe.

His comments come after the amateur dancer revealed his secret dancing woes.

Adam revealed he’d been injured during his last week on the show.

“Honestly, I can say this now, I kept this under wraps, but my ankles were going, weren’t they?” Adam explained to Rylan.

“My calf was burning. I wanted to do as many runs as I can, but it was one of those dances which require 150 per cent of you.”

He added: “If you haven’t got the 150 per cent you need, nothing else is going to put you apart.

“On the Thursday, [I said], ‘Katya, I can’t do anymore… I can push through things most people can’t push through but my Achilles is going to go if [I continue].'”

Adam admitted he is sad that he has exited Strictly but added that there is one advantage.

“I’m still exhausted,” he explained. “But, I’m very relieved to get a little lie-in.”

Meanwhile, a tearful Katya added: “Thank you for everything. I am still not ready to go.”

It Takes Two airs weekdays at 6.30pm on BBC Two.