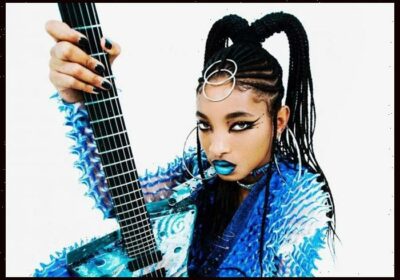 The visual shows Willow staring out the window into the pouring rain before picking up her electric guitar and singing, “Met her at a party, I said, ‘She seems nice’/ Every time I thought about it I got butterflies/ And when it turned out we agree that she’s all right/ Never thought I’d be trippin’/ Off all the lost time/ That I said it was fine.”

“It’s all too often in tender emotional states we try to blame our hurts on other people,” WILLOW said in a press release. “Even though none of us are perfect, in some capacity it’s us who allow ourselves to get into situations that don’t serve our highest purpose.”

“‘maybe it’s my fault’ explores what it’s like to hold ourselves equally accountable for the emotional pain we feel while also allowing ourselves to be human and fully process all of our feelings without shame,” she added, explaining the song’s message.

“Maybe It’s My Fault” serves as the lead preview of Willow’s forthcoming album, due out later this summer. Her previous record was Lately I feel EVERYTHING, which was released in 2021.