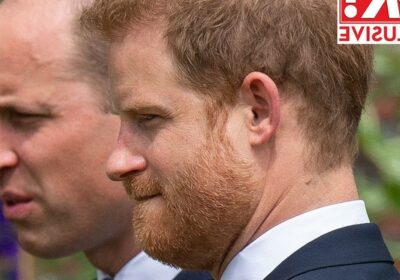 Prince William will feel 'sick to the pit of his stomach' at the news that Prince Harry and Meghan Markle 's bombshell interview with Oprah Winfrey has been nominated for an Emmy.

Speaking exclusively to OK! , royal expert Duncan Larcombe explains: "William will feel sick to the pit of his stomach at Harry and Meghan's Emmys nod. The interview was an attack on his family and his wife and is now being heralded as one of the entertainment moments of the year."

During the interview, Meghan revealed that it was William's wife Kate Middleton who had made her cry after a row over flower girl dresses. The story had originally been reported to suggest it was Meghan who had made Kate cry.

The couple also revealed how a senior member of the royal family had voiced their concerns over their two-year old son Archie's skin colour.

And Harry insisted that his brother Harry and his father Prince Charles were 'trapped'.

Duncan adds: "The Emmys nod is more bad news for the royals. It means that as awards gain momentum, once again Harry and Meghan's attack on the institution will be repeated over and over again."

Harry and Meghan's groundbreaking interview has been nominated for the prestigious gong in the Outstanding Hosted Notification Series or Special category.

Oprah with Harry and Meghan: A CBS Primetime Special is nominated against the likes of Netflix's My Next Guest Needs No Introduction with David Letterman, CNN's Stanley Tucci: Searching For Italy and United Shades of America with Kamau Bell, and Showtime's Vice.

Brits are expected to do very well at the awards ceremony, which will take place in September, with The Crown scoring 11 nominations, I May Destroy You being nominated for six awards, and Bridgerton fighting for three. During the interview with Oprah, Meghan said she had suicidal thoughts while being an active senior member of the family but was denied help when she asked for it.

Another claim Meghan made involved her marriage to Harry, as she told Oprah they were married in a secret ceremony in their garden three days before the televised "spectacle" at Windsor.

Meghan told her: "You know, three days before our wedding, we got married. No one knows that." "We called the Archbishop and we just said, 'Look, this thing, this spectacle is for the world but we want our union between us'.

"So, like, the vows that we have framed in our room are just the two of us in our backyard with the Archbishop of Canterbury."

For the latest royal news, sign up to our daily OK! newsletter.