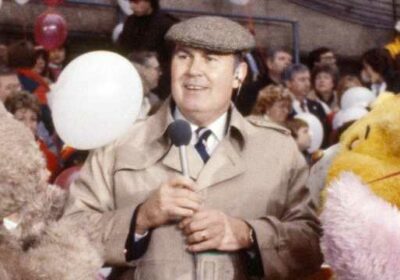 Willard Scott, the legendary Today show weatherman, has died. He was 87.

Al Roker confirmed Scott’s death on Saturday by paying tribute to his former Today colleague on his Instagram. Roker shared a slideshow filled with photos of him and his “second dad.”

“We lost a beloved member of our @todayshow family this morning. Willard Scott passed peacefully at the age of 87 surrounded by family, including his daughters Sally and Mary and his lovely wife, Paris,” Roker wrote. “He was truly my second dad and am where I am today because of his generous spirit. Willard was a man of his times, the ultimate broadcaster. There will never be anyone quite like him.”

Scott began his career in broadcast in the 1950s after graduating from American University in Washington. In 1955 he hosted “Joy Boys” radio on the NBC station WRC until it ended in 1974. In the ’60s he also hosted children’s TV shows, playing a range of characters including Bozo the Clown, as well as was the first person to play Ronald McDonald.

Scott then joined Today in 1980 and was best known for wishing happy birthday to viewers turning 100. He delighted fans by doing forecasts on the road and dressing up for special events. The beloved TV personality passed his weatherman duties over to Roker in the ’90s. In 1985, President Ronald Reagan awarded Scott a Private Sector Award for Public Service.

After a 35-year career on Today and 65 years with NBC, Scott announced his retirement in December 2015.

After hearing news of his death, many took to social media to send their condolences. Katie Couric also shared a heartfelt statement on her Instagram.

“I am heartbroken that the much loved Willard Scott has passed away. Willard played such an outsized role in my life…whether it was as the Ronald McDonald of my childhood, ‘Joy Boy’ of radio in Washington DC, and of course, as a ubiquitous presence on the @todayshow (1980-2015),” Couric wrote. “Willard was as warm and loving and generous off camera as he was on. I last saw him at the funeral of Jim Vance, the longtime lead anchor of WRCTV in Washington DC. Willard, you may not have made it to the front of the Smucker’s jar, but you made mornings brighter for millions of Americans. Thinking of all my friends at Today who felt like Willard was family. With love and appreciation for a life well lived. ❤️❤️❤️❤️❤️❤️❤️.”

Additionally, Jenna Bush Hager commented on Roker’s post “What a man! Thinking of you so,” with Natalie Morales adding, “The sweetest, kindest person who truly loved talking to everyone! Hope you are doing ok @alroker … what a life he had!”

Sad news. Willard Scott, the long-time TODAY show weatherman known for his outgoing, jovial personality, and celebrating the lives of viewers who had reached their milestone 100th birthdays has died, according to the show.

Willard Scott was so special and we will all miss him. My Deepest Condolences. May He Rest In Peace and May His Memory Be A Blessing. pic.twitter.com/VMQWduLSDX

Willard Scott was a legend and I was so honored to work with him. He was always a gentleman, always kind, always funny and unbelievable at his job. Sending love to his family that he loved so much. #WillardScott ❤️

Scott had two children with late wife Mary Dwyer Scott. The two were married from 1959 until she died in 2002. He is survived by his wife, Paris Keena, whom he married in 2014.