Home » Celebrities » ‘Will look nuts!’ Cat Deeley on ‘macabre’ plans to wear jewellery made out of sons’ teeth

‘Will look nuts!’ Cat Deeley on ‘macabre’ plans to wear jewellery made out of sons’ teeth 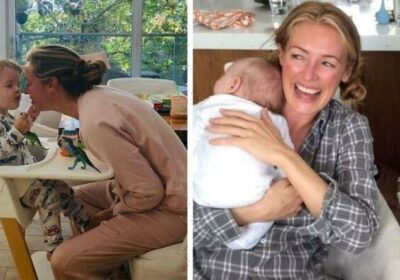 Cat Deeley has revealed her plans to have a bracelet crafted from the teeth and skin of her children after commissioning an artist to work on the highly unusual piece of jewellery. The 45-year-old TV presenter has two sons, Milo, aged six and James, aged three and says she has been looking for a memento that would help keep them close to her when they were apart.

It’s macabre and a bit weird!

Cat freely admits that she feels the move is “macabre”, but nevertheless can’t wait for the creation to be complete.

London artist Conor Joseph has already been commissioned to provide the piece, as Cat confirmed earlier this week.

The TV star explained she first had the brainwave for the jewellery when son Milo lost his first tooth.

“It’s macabre and a bit weird,” Cat stated, but then urged listeners to “bear with” her as she related why she was inspired.

“The tooth fairy came. But she had very little small change and had to give notes.

“I’m having a bangle made with their skin on it, and I’m going to get him to dip the baby teeth in gold and then attach them one by one to my bracelet,” Cat explained.

“I’m going to get [the artist] to dip the teeth in gold and attach them one by one to my bracelet.”

The former SM:TV Live presenter revealed her excitement over the project.

Cat enthused: “They will dangle and it’ll look nuts.”

“I do have to write to the tooth fairy asking for the tooth back,” she quipped on the Sheerluxe Show podcast.

Conor Joseph also makes personalised jewellery using the fingerprints of a loved one – something which Cat intends to order from him as well – but this is believed to be the first time he has ever had a request to incorporate a human tooth into his designs.

Addressing years of speculation that the pair had been in a “lesbian relationship”, Edith had firmly denied the allegations.

A bemused Edith also laughed off the idea that because they had come out of nightclubs “in each other’s arms” that it could suggest an affair, correcting that they were merely “drunk”.

“And it was like, ‘Oh, Cat and Edith are in a lesbian relationship’.

Photographs of us kind of holding each other up, coming out of the Met bar or whatever was because we were p****d.

“It wasn’t because we were like, licking each other’s faces off!” she added.

Clarifying her relationship with Cat, Edith explained on Angela Scanlon’s Thanks A Million podcast: “We are in love, but as friends kind of thing.”

The radio show host went on to brand the speculation “bizarre.”