Why you have to watch ‘Tenet’ with the subtitles on 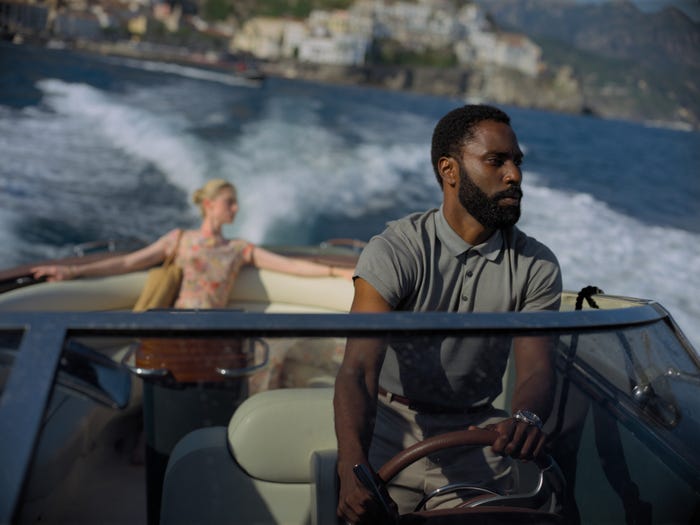 "I'm never going to do that." It's a statement I've made time and again when I've seen my parents watching TV shows and movies with the subtitles on. But Christopher Nolan broke me.

I was completely enthralled by his latest movie, "Tenet." I traveled two states to see it in an empty movie theater and with a mask on I watched John David Washington's protagonist navigating a twilight world in need of saving.

However, there was one issue: sometimes I had no clue what was being said.

It's a testament to the filmmaking of Nolan that I still understood what was going on. As always with his movies, it had a satisfying ending and afterwards, my mind was twisted trying to put together the jigsaw puzzle that is a Nolan story.

Though there was something else swimming in my head as I took the hour drive back home from the theater: "What did John David Washington say while captured in the warehouse?"

"What did Robert Pattinson say to those guards eating?"

"What was anyone saying in the opening sequence of this movie?"

Could the sound system in the movie theater I was in not have been the best? Possibly. But if you are a fan of Nolan's work you also know that in several of his movies it's hard at times to make out what people are saying.

The most well-known example is "The Dark Knight Rises," Nolan's 2012 coda to his Batman trilogy that featured Tom Hardy as Bane. The bulky masked villain sounded scary, but mostly was hard to understand.

Then with his 2014 space epic "Interstellar," Nolan admitted that fellow Hollywood directors called him up to tell him the sound was "inaudible."

The "I can't hear" knock has also been placed on other Nolan movies like "The Prestige" and "Dunkirk." But, for me, it was never a huge distraction until "Tenet." And it's been bugging me that there were lines I missed.

So two weeks ago an early Christmas present came in the mail: a Blu-ray of "Tenet." I realized then and there what I would have to do: watch the movie with the damn subtitles on.

And I'm here to tell you, it was the best decision I could have made.

While watching the beautifully-mastered disc I felt I was seeing the movie for the first time thanks to the subtitles. Especially at the beginning of the movie as the protagonist and his undercover CIA team are at the Kyiv opera house. Watching this in the theater I got the general idea of what was going on but there were moments where I was completely clueless.

'This siege is a blind for them to vanish you.'

Like when the masked protagonist enters the enclosed box seat section to rescue the undercover agent. He says to the agent: "You've been made. This siege is a blind for them to vanish you." Oh! So that's why they went into the opera house. Good to know!

When the protagonist and his team meet at the rally point in the opera house they talk about what the plan is to get out. He decides to go rogue and run back into the concert hall to collect all the bombs the mercenaries planted, which isn't part of the plan. He says, "Mine now."

It gave me a whole new look at the protagonist character when I realized he was willing to risk his life to save the audience. It just amps up his likability and is the first indication of his drive to do the right thing.

Another sequence in the movie I was excited to delve back into was the warehouse where the protagonist sees Kat (Elizabeth Debicki) shot with an inverted bullet. There's a whole back and forth between him and Sator (Kenneth Branagh) that I only partially caught.

Thanks to the subtitles I learned Sator was trying to figure out where the artefact was placed and the protagonist told him he kept it in the BMW. Subtitles help a lot for this hugely complex scene in the warehouse, which some dialogue is heard in reverse to play on the inverse world.

Along with plugging the story holes in my head for months, watching "Tenet" with the subtitles on also revealed that there are some great one-liners in the movie.

While infiltrating Priya's (Dimple Kapadia) sky rise apartment, Neil takes care of the guards. I never caught this, but a few of the guards are eating, and with a pistol trained on them, Neil says: "Don't let it get cold."

There are also a handful of solid lines from the protagonist. Some you can definitely make out, like when he's about to take on Sator's thugs in the kitchen he says: "I ordered my hot sauce an hour ago." But did you catch these lines:

When Neil saves the protagonist in the concert hall and runs off. At that point, no one knows who he is.

When Priya asks the protagonist whether he has a plan for getting out once the police show up, he replies, "Not one I love," before promptly jumping off the building.

'Is that Whitman? Pretty'

The protagonist's answer when Sator says to him on the yacht, "We do live in a twilight world."

So why is it challenging to hear what's being said in Nolan movies?

Believe it or not, some of it is intentional. Peter Albrechtsen, a sound designer who worked on "Dunkirk," told Variety at the time of the "Tenet" release that the sound in a Nolan movie is like almost every aspect of his storytelling an audience goes through: "You have to be on your toes."

Albrechtsen also told the trade that Nolan rarely uses ADR (Automated Dialogue Replacement), in which actors rerecord dialogue in a studio that can't be heard clearly. That means what we are often hearing is what the actors said on the day.

And it seems Nolan isn't losing much sleep on the complaints audiences (and even filmmakers) have had about the sound in his movies.

"At a certain point, you have to decide if you've made the best possible version of the film and you're trying to account for inadequacies in presentation," Nolan told IndieWire in 2017. "That's chasing the tail. It doesn't work. I will say, with our sound mixes, we spent a lot of time and attention making sure that they work in as predictable a way possible."

Now, I could be really upset that I had to put on the subtitles to finally feel like I've seen "Tenet." But I see the experience as a deeper exploration into a Nolan movie.

Would I be so excited if I didn't like "Tenet" already? No way. But for a director that I feel is always telling stories that need to be seen multiple times to be fully understood, I saw this as a logical step in unlocking his latest riddle.

I look forward to Nolan's next challenge.

"Tenet" is available on Blu-ray, DVD, and On-Demand on Tuesday.