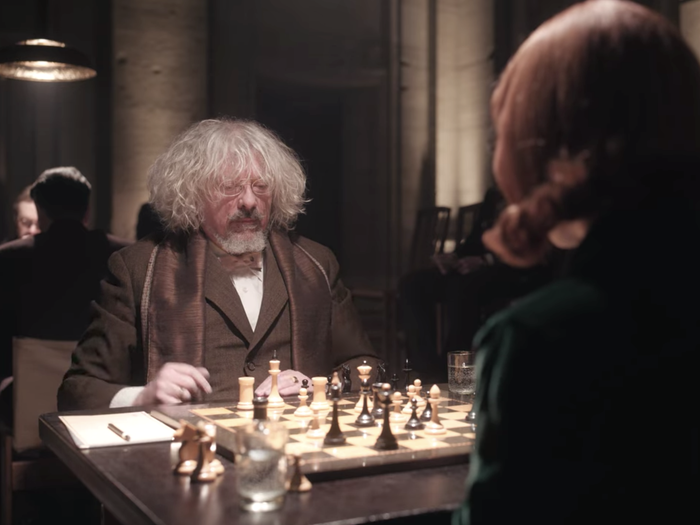 Each of the seven episodes in Netflix latest hit series, "The Queen's Gambit," features the fictional chess genius Beth Harmon delivering a satisfying win against a male opponent.

But each of those wins, even the final one against Russian powerhouse Vasily Borgov, pales in comparison to the catharsis that came with her defeat of a man known simply as Luchenko.

Beth plays the oldest player in the tournament in the penultimate game of the Russian invitational tournament. And she needs to beat him to get to the table with Borgov and compete for the title of World Champion.

It's an unexpectedly emotional moment in the series, and by the time the credits rolled, it proved to be the most powerful match Beth had ever played.

Luchenko was the first truly decent opponent she faced in Russia

The build-up to the Luchenko match showed how all of Beth's other male opponents either underestimated her, grew angry with her, or behaved condescending toward her.

Just before her game with Luchenko, Beth defeats two men: Hellstrom and Shapkin. Hellstrom angrily storms away from the table without a word, leaving Beth alone and disrespected at the table.

The tournament announcer notes that her next opponent, Shapkin, "was very decent, very civilized, and took his loss with grace, even though Harmon's win over him was decisive and merciless." But Shapkin doesn't shake Beth's hand. Instead he frowns, then stands up, and reaches out to gently kiss Beth's hand.

It's a nicer gesture than Hellstrom's, but the moment still doesn't sit right. It honestly feels like an over correction. Shapkin is still treating Beth differently than he would a male opponent.

Then comes Beth's match with Luchenko.

"Luchenko's the oldest player here," the tournament announcer says. "He was World Champion before Elizabeth Harmon was born. He defeated the great Alekhine in an exhibition when he was a boy, played to a draw with Botvinnik and crushed Bronstein in Havana. And while he's no longer the tiger he once was, he's a dangerous player when allowed to attack. Harmon will have to be very careful."

Earlier in the series, Beth overheard the Russian team discussing how her game was all attack, which means her defense is lacking.

Luchenko was first mentioned in "The Queen's Gambit" in episode five, when Harry Beltik told Beth to study his games against Borgov in 1962. In that same episode, Benny Watts told Beth she attacks just like Alekhine, the same player who Luchenko beat when he was a boy. Then we see that Luchenko is playing white, meaning he's able to move his pieces first, therefore having the advantage over Beth.

The game begins tough, leading to an adjournment. Beth spots Luchenko consulting with Borgov and Hellstrom, working together to prepare strategies against her. Standing all on her own, Beth works out her own end game plan.

They both return to the board and Beth easily defeats Luchenko.

"Excellent," he says. "What a brilliant recovery. I resign with relief."

Aside from Beth's US State Department escort and a restaurant server, this is the first time a single person has spoken directly to Beth in the Russian tournament.

That his words are filled with praise and respect make it all the more important. You can see how surprised Beth is in the moment. She brings both her hands to one shoulder — a physical signal that she's been emotionally disarmed. The first time she did that in front of a chess board was when Watts beat her in the US Open. She's similarly emotional in this moment, but finally it's for a good reason.

"You are a marvel, my dear," Luchenko tells Beth. "I may have just played the best chess player of my life."

Luchenko doesn't shake Beth's hand nor kiss it. Instead, he stands and gives her a gracious bow. It's yet again a sign of his deep respect for her, and his way of treating her not only like an equal, but with the acknowledgement of her superior talent in that moment.

You can see how much his graciousness means to Beth. It's an emotional release for the audience, as well. We can feel in that moment how it might be enough, even if she doesn't beat Borgov, to have Luchenko's respect.

It's a pitch-perfect antithesis to the sexism Beth has faced throughout the series. From the start, "The Queen's Gambit" shows how Beth is systematically underestimated by the men she faces behind the chess board. Even Mr. Schaibel, the first person to acknowledge her "astounding" talent while he taught her chess in the basement of an orphanage after her mother was killed in a car crash, began his relationship with her by saying: "girls don't play chess."

As she grows older, the rare men who do take Beth seriously only do so after she beats them. Most men show signs of embarrassment or bitterness when she wins. They look physically diminished, as if being beaten by a woman is the worst thing that could have happened to them in that moment.

But Luchenko loses with a smile on his face. His soft-spoken admiration for Beth is so unexpected in the cold Russian halls that it brought literal tears of joy to my eyes.

The build-up in the first half of the finale makes the audience expect a big catharsis from her game against Borgov.

For most of Beth's chess career, she's been chasing a win against the reigning World Champion. Her two prior losses against him (one of which was at the beginning of a low point in her chess-related struggle with addiction) prepared audiences for the epic win over Borgov to be the emotional high of her story.

But it wasn't. That rush of emotions came instead primarily from her win over Luchenko.

Don't get me wrong: The final excitement of Beth defeating Borgov, with her support team of chess-boys behind her, was fantastic and thrilling to watch. More tears came when Benny was able to tell a room full of her best friends and supporters that she had won, and they exploded with the same victorious energy I've seen in male-dominated sports movies my whole life.

In the end, Beth had claimed her title and left no doubt in anybody's mind that she was the best chess player in world. But by the time she was a World Champion, Beth had already become a queen.