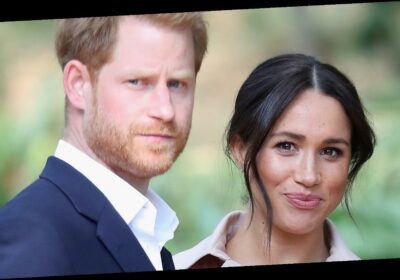 Anyone who has followed the relationship between Prince Harry and Meghan Markle knows that the two royals live their lives with intention. Everything they do has layers of deliberate meaning, like when Harry incorporated diamonds belonging to his late mother, Princess Diana, into Meghan’s engagement ring. Or, most recently, when the duo timed their second pregnancy announcement to coincide with that of Harry’s own 37 years prior, again paying tribute to Diana.

But Meghan, who is biracial — her mother is African-American and her father is white — has honored her personal history, too, particularly during important times in her life with Harry, including their wedding day. Channeling Meghan’s Black heritage, Reverend Bishop Michael Curry gave a sermon and the Kingdom Gospel Choir performed during the ceremony at Saint George’s Chapel in 2018, per Elle.

Now, the loving photo accompanying Harry and Meghan’s pregnancy announcement is following in that same tradition of paying tribute — but you need to look behind the camera to see it.

Fans of the royals cannot get enough of the new photo of Prince Harry and Meghan Markle. Amid a background of trees and vegetation, she’s lying on the grass, with her hand on her baby bump and her head in Harry’s lap, looking up at him and smiling. He’s also on the grass, gazing lovingly down at his wife and the mother of his son, Archie — and soon-to-be second child.

But what you cannot see in the photo is that it was taken by Black photographer Misan Harriman, a friend of the couple (he even calls her “Meg”), who was also the first Black male photographer to shoot a cover for British Vogue. The Nigerian-born Brit is also renowned for photographing the Black Lives Matter movement.

“The Sussexes consider their privacy sacred and including Harriman in their secret not only elevates his voice and art, but elevates his activism,” Kinsey Schofield, creator of the British royal family website ToDiForDaily.com told Nicki Swift. “This is another example of Meghan Markle using her platform positively to elevate people of color and important messages.”

Schofield added, “The subtle (and selfless) way that they celebrate and elevate change-makers is a reflection of their ultimate objective… which is to make the world a better place for their babies.”