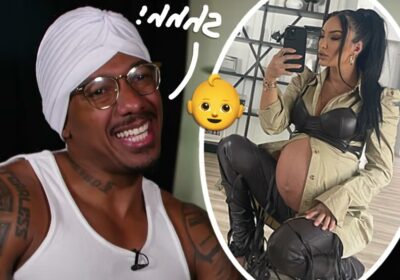 Nick Cannon is at it again — the eighth time, just to be clear! LOLz!

If you’ve been keeping up, you know the 41-year-old TV host welcomed the newest addition to his army of little Cannons with Bre Tiesi, but the catch is the baby was born a full month ago! The new mother took to Instagram Monday to reveal the birth of her son, Legendary Love Cannon. One day later, she uploaded a gym selfie with the caption “and I’m backkkkk,” to which fans quickly shared concern, pointing out that women are typically advised to take six to eight weeks off from exercising following delivery. However, the 31-year-old model was quick to handle the situation, responding:

“When you have a natural delivery you actually recover much quicker! I waited three weeks to be cleared and took it easy and listened to my body.”

She responded to another fan, explaining:

“I am healed. My baby is a month old… I’m also taking it easy, listening to my body and doing all low impact.”

Sounds like she knows what she’s doing, and as long as the doctor cleared her and the baby is healthy then more power to her! See the baby reveal (below):

As for why the parents kept their youngling’s entrance into the world quiet for all this time, she revealed:

“I had planned on keeping a secret my whole pregnancy and announcing when he was born or his first bday etc butttt someone sold me out months in. After I knew to never say how far along I was and I had enough photos to keep posting like I was pregnant.”

Sounds like she wanted to pull a Kylie Jenner and keep EVERYTHING under wraps, but things just didn’t work out that way — maybe one of Legendary’s seven half siblings accidentally spilled the beans! Although Bre did remind us that our glimpse into her life is extremely methodical, as she emphasized:

“I’ve said this before and I’ll say it again.. y’all see what I want you to see.”

Well, for the most part at least…

A full video on the new baby’s arrival was posted to her YouTube, where she further explained:

“I took my time because I wanted to enjoy my son and my family and allow my body, mind and soul the true peace to recover and embrace every moment.”

She added that the Internet is a “a dark, nasty place” and she wanted to protect her and her son. She noted:

“This was the most vulnerable thing I’ve ever done. I’m glad I made this choice. I would been fragile right after.”

See the full video (below):

As for the daddy of eight, well, he’s just happy to get back on his naming game! The Masked Singer host revealed on IG Tuesday a video of him and his boy with an arsenal of nicknames for baby Legendary, explaining:

“Y’all know I do the MOST with these names. Introducing LEGENDARY LOVE CANNON! Aka LL COOL CANNON! Aka LLC! Aka YOUNG LE-LO! AKA BROTHER LOVE!!”

The busy father must spend a lot of time running around to keep up with all of his children… Or does he? Bre spoke with Entertainment Tonight last month to reveal her feelings on sharing time with his other children, to which she revealed:

“We can all go through the assistant to make sure it’s on the calendar if there’s anything important.”

Ooh, that does not sound too good for Nick! However, he quickly contested her comment, explaining:

“My children have busier schedules than I do. They each have their sensory class at 9 a.m. and then they have, you know, ballet at 3 and baseball at 4, so they’re the ones with the schedules.”

Ok ok, we believe you. He concluded:

“I dedicate probably my entire day to my children. Luckily, we are in a world where I’m blessed with the opportunity. I get to spend more time with my children every single day because of my world and my business model.”

That’s what we like to hear! Anyway, what are YOUR thoughts on baby Legendary’s announcement? And what do you think about Nick’s dad duties? Let us know in the comments below!