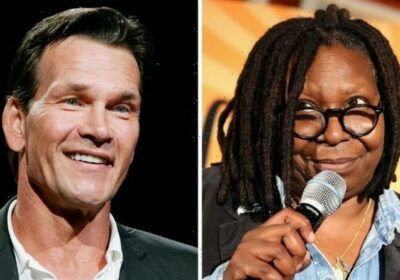 Whoopi Goldberg returns to The View

Mr Swayze’s life will be looked at as part of tonight’s Channel 5 documentary Patrick Swayze: The Demons & the Dance. The brand new documentary is set to explore Mr Swayze’s remarkable life, examining the crazy levels of fame he enjoyed, to the darkest of tragedies he experienced. It will also interview people regarding his sad passing in 2009 with pancreatic cancer – just 20 months after his original diagnosis was confirmed.

When it was announced Mr Swayze was receiving treatment for his condition, a host of the world’s biggest stars lined up to pay tribute to the actor, who had iconic roles in films such as Dirty Dancing.

Ms Goldberg was among them, and credited Mr Swayze for helping her claim the 1990 Oscar for Best Supporting Actress in Ghost.

Co-starring alongside Mr Swayze, Ms Goldberg paid tribute to the 57-year-old in 2008.

She told ABC daytime talk show The View: “When I won my Academy Award, the only person I really thanked was Patrick.”

Her role was as Oda Mae Brown, a psychic who helps slain businessman Sam Wheat (performed by Mr Swayze) communicate with his grieving fiancee and, ultimately solve the murder that killed him.

She had nearly not landed the role, but Mr Swayze was adamant Ms Goldberg was perfect for the role, and eventually persuaded director Jerry Zucker to cast her, despite there being “some resistance”.

Ms Goldberg said Mr Swayze even threatened to walk if she wasn’t involved, adding: “I’m not making this movie unless you put Whoopi Goldberg in there.”

Her comments were made after his representative Annett Wolf confirmed he was undergoing cancer treatment.

In a statement released by Ms Wolf, Swayze’s physician Dr George Fisher said he was “optimistic” about the actor’s prognosis for battling the disease.

He added: “Patrick has a very limited amount of disease and he appears to be responding well to treatment thus far.”

Mr Swayze enjoyed an eclectic career on screen, known for playing distinctive lead roles in a variety of genres including romance, comedy and action.

His looks were also a source of fan delight, and he was named PEOPLE’s ‘Sexiest Man Alive’ in 1991.

He also found critical acclaim, picking up three nominations for the Golden Globe Award for Best Lead Actor in a Motion Picture – Comedy or Musical.

Other iconic roles included in films like Road House and Point Break, and in 1997 he was honoured with a star on the Hollywood Walk of Fame.

After his death 12 years ago, tributes poured in for Mr Swayze, with many of his co-stars – including Ms Goldberg – hailing the US-born star.

Jennifer Grey, who starred opposite the actor in Dirty Dancing, said in a statement: “Patrick was a rare and beautiful combination of raw masculinity and amazing grace.

“Gorgeous and strong, he was a real cowboy with a tender heart. He was fearless and insisted on always doing his own stunts, so it was not surprising to me that the war he waged on his cancer was so courageous and dignified.”

Writing on Twitter Demi Moore, who played Molly, fiancee to Mr Swayze’s character Sam in Ghost, said: “Patrick you are loved by so many and your light will forever shine in all of our lives.”

Patrick Swayze: The Demons & the Dance airs tonight at 8.30pm on Channel 5.