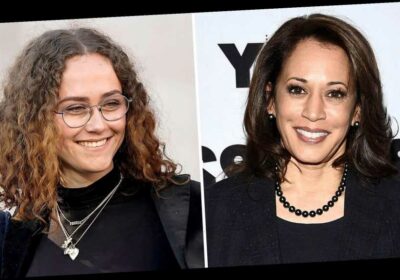 Stealing the show! Ella Emhoff turned heads with her style at the 2021 Inauguration of President Joe Biden and her stepmother, Vice President Kamala Harris, earlier this month.

The Parsons School of Design student, 21, made headlines for her Miu Miu plaid, bedazzled coat and Batsheva maroon dress that she wore while attending the Washington, D.C. event on Wednesday, January 20. She attended alongside her father, Doug Emhoff, and brother, Cole Emhoff, in support of Harris, 56.

Doug, also 56, who has been married to the former senator since 2014, shares his two children with ex-wife Kerstin Emhoff.

While most of America was focused on the swearing-in ceremony and the musical performances from Lady Gaga and Jennifer Lopez, many noticed Ella and her fashionable outfit choice.

“My mood board was very ‘little girl,’ in a sense, a lot of scalloped collars and big silhouette shoulders and small buttons,” Ella told Vogue of her ensemble. “I was going for something girlier, to embrace my feminine side — especially after that suit that I felt so great in — because, like, how many times do you prepare yourself to attend an inauguration? This momentous of an event deserves a momentous outfit.”

The California native, who is named after Ella Fitzgerald, also opened up about her choice of a Batsheva dress under her showstopping coat.

“Something that’s really important for me, especially with people I wear, is: I want to be able to see them as an artist and as a designer, and work with people who I really respect,” she explained. “I love New York for its fashion community, especially the parts that are created through Instagram, so working with a designer from that scene who was able to create something formal was perfect.”

Ella, who is a designer herself, has the support of her stepmother, who she and brother Cole, call “Momala” instead of stepmom.

“They are brilliant, talented, funny kids who have grown to be remarkable adults,” Harris wrote in an essay for Elle in May 2019. “I was already hooked on Doug, but I believe it was Cole and Ella who reeled me in. They are my endless source of love and pure joy.”

Scroll down to learn more about the newest second daughter of the United States.