Home » Celebrities » 'We Will Not Leave Until Our Demands Are Met': Inside the Howard University Protests

'We Will Not Leave Until Our Demands Are Met': Inside the Howard University Protests 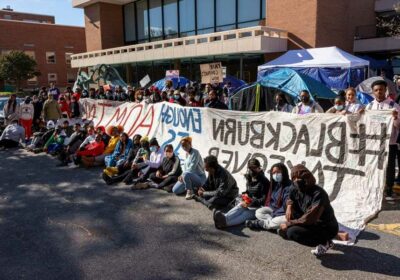 Red, white, and blue tents filled with student protesters sit perched outside the Howard University Armour J. Blackburn Center. For almost month, demonstrators have gathered to bring attention to concerns about the health and safety of those living on campus. Complaints about housing insecurity, mold in the residence halls, and the removal of students, alumni, and faculty positions from the Board of Trustees have fueled the sit-in. This is the longest protest in the history of the institution. And though President Wilbur Franklin addressed the community on Friday in his annual state of the university address — pledging that students are being heard, and concerns are being addressed — students continue to demonstrate, demanding change.

“To be here and wake up in the morning coughing up blood because of my room conditions, there’s rats and roaches. I’m honestly disgusted at Howard,” said a student who asked to remain anonymous, echoing a complaint from others on campus. “When I imagined my life here I imagined so much more glamour and glitz that they speak of and talk about they talk about ‘The Mecca,’ the school where Zora Neale Hurston and Toni Morrison went.”

After seeing the pictures of mildew, mushrooms, and flooding, leaders of the Live Movement, a national student coalition for Historically Black Colleges and Universities (HBCUs), became determined to ensure administrators were aware of students’ discontent. This year’s protests began on Oct. 12, when members of the Live Movement attended the Howard University Student Association (HUSA) town hall. According to HUSA, every member of the president’s cabinet was extended an invitation, but none came.

“The HUSA Town Hall was intended to connect students to resources and be a meeting point for peers with questions, grievances, and concerns regarding their Howard experience. Administrators were invited to attend but unfortunately did not,” said HUSA President Kylie Burke. At the meeting, students talked amongst each other about how elected leaders could work to resolve the most pressing complaints on campus. 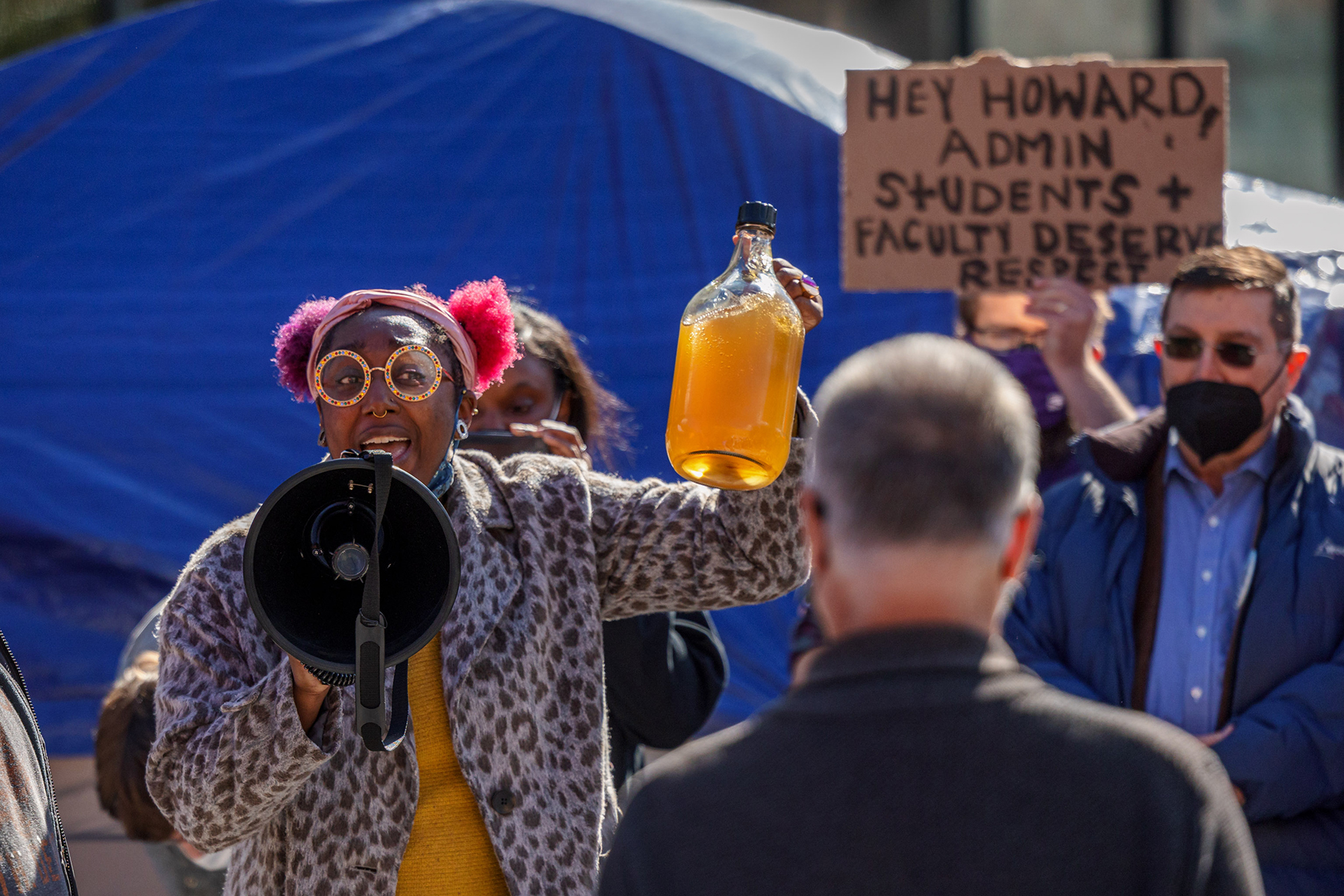 A faculty member displays a sample of water collected from an eyewash station in the Howard University chemistry building.

Once the event concluded, an occupation began. Approximately 30 students refused to leave the building until their list of three demands were met. They requested the following: an in-person town hall with President Wayne Frederick and administration scheduled before the end of October; reinstatement of all affiliate trustee positions (student, alumni, faculty) on the Board of Trustees with voting power; and that the President and Chairman of the Board propose a meeting with student leadership to outline their “housing plan” to protect the incoming classes of Howard’s immediate future.

“We took it upon ourselves prior to the town hall to organize and to plan … and they [students] supported us which is why we’re still here,” said Live Movement founder Aniyah Vines. “We are executing our right to protest, we are peacefully assembled.”

Vice President of Student Affairs, Cynthia Evers, has claimed that students moved to occupy the building forcibly, and are spreading false information. “The University looks to fully preserve the integrity and authenticity of students’ constitutionally guaranteed rights of free speech and assembly while protecting against the weaponization of these rights as false representations of the Howard student experience at large,” Evers wrote in an email to the student body on Oct. 13. “Even after meeting for lunch twice over the last two weeks with administrators, some of the protestors are distributing disinformation to encourage a public perception that the administration has not met with them. This is not the truth. The truth is you did not like the honest answers that you received when we met.”

There have been several attempts for protestors and administrators to meet. On Oct. 14, administrators met with Burke and Vines in an effort to further resolve the unrest. After removing chains from the doors of the administration building, the two sat down with Executive Vice President Tashni Ann Dubroy and President Frederick.

At the meeting, Dubroy claimed that most of the mold in the residence halls arose from extreme weather conditions and students’ poor cleaning habits. “I cannot get down on my hands and knees to clean students’ dorm rooms,” she said. She followed up by sharing that the University is working with a company to remove mold from residence halls.

Vines requested that those involved with the protest be granted legal and academic immunity; Frederick said that this was not possible because the decision lies with individual instructors. Yet the Howard Faculty Senate who released a statement in support of students’ right to protest: “We hope there is no consideration of the forced removal of students from Blackburn by security or law enforcement. We also hope there is no discussion among the HU administration or board of retaliation directed towards student participants or their supporters.”

The protest has made significant progress by gaining support of their peers at HBCUs across the nation. As they live inside of the Blackburn Center solely off of donations, students have developed multiple methods to sustain survival. Hospitality, meal organizing, media and communications are just a few of the roles in which different participants work. Students still don’t feel safe going back into the dorms because they say no conditions have been improved. 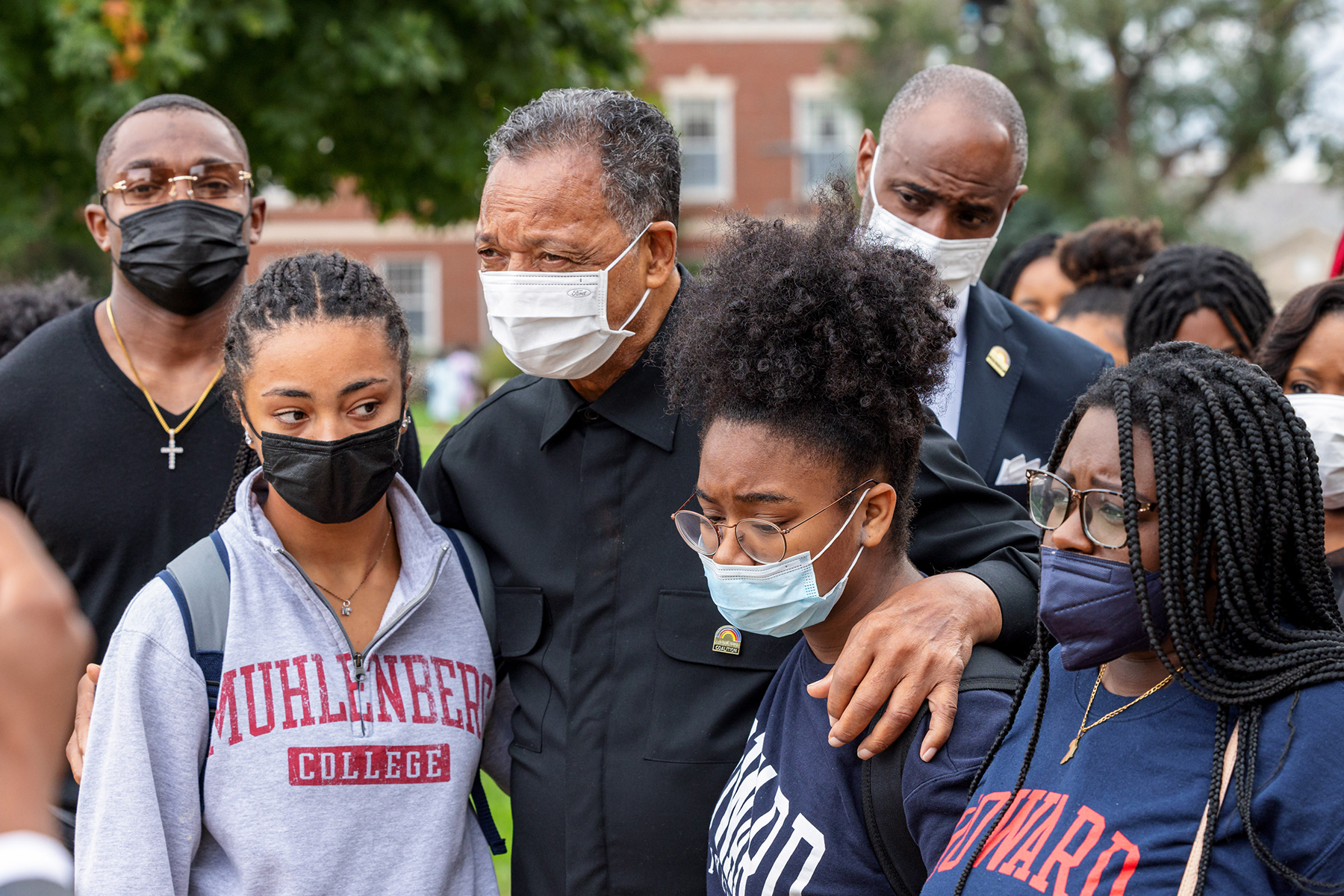 Political and civil rights leaders have also lobbied in support of those occupying Blackburn. Jesse Jackson, Cory Booker, and Ayanna Pressley have each gone inside to speak with protestors. Jackson even hosted a town hall for parents, faculty and students to attend to gain clarity on what has occurred. This support has bolstered the confidence and commitment of those involved.

Because of their demonstration, the HUSA President and the Graduate Student Assembly Chair have been granted voting privileges on the Student Life Committee of the Howard University Board of Trustees. Administration also held a virtual town hall for parents on Oct. 26. The chat feature was disabled and no live questions were answered in real time. President Frederick hosted his State of the University address on Nov. 5 in similar fashion. A small group of students were invited to ask the president questions.

The university has announced that the protest caused them to lay off Sodexo employees who worked in the building’s cafeteria. However, the Office of Campus Life is still operating out of the building. They have not said if students will be issued a refund for their dining plan due to the cafeteria’s closure.

“Sodexo respects the students’ right to a peaceful protest. Due to the closure of the Blackburn Center, Sodexo is unable to operate its usual dining function,” reads a statement from a Sodexo spokesperson, sent to DCist/WAMU. “As a result, we laid off some of our staff and moved others to other locations on campus, where possible. Upon reopening the Center, all displaced employees will be able to return to work based on their seniority.”

Nonetheless, students remain steadfast in their pursuit of a better relationship between students and administration at the university. As temperatures outside drop, their enthusiasm for the movement has not.

“We will not leave until our demands are met,” said Vines. “This fight is too important to lose.”

Ashleigh Fields is editor in chief of the Howard University student newspaper The Hilltop.